On its own terms, Steven Spielberg’s epic Empire of the Sun doesn’t make an everlasting impact. The 1987 movie is too stylized and self-conscious to successfully execute a coherent theme. It is an engaging movie nonetheless.

Made as a response by the director to critics claiming he makes movies about only innocent childhoods, Empire of the Sun is best understood as a transitional and reactive film in Mr. Spielberg’s career. Every frame of this movie about a British boy’s wartime separation from his parents in Shanghai—resulting in imprisonment in a Japanese internment camp—moves with a sense of purpose, unfolding the story of one child’s trauma, loss of innocence and damaged, stunted growth. From the opening scenes’ floating coffins, children’s choir and comic books to the elegiac final picture of a drifting collection of what’s been lost and dispensed with, Empire of the Sun is somber and severe.

Introducing Christian Bale (American Psycho, Terminator Salvation, Batman Begins, Swing Kids, The Dark Knight, The Dark Knight Rises) in his movie debut as a diplomat’s only child on the eve of Japan’s invasion of China, the film’s main character goes from being called James to Jamie to Jim. For two and a half hours, Bale’s boy makes a full circle with his angelic choirboy’s voice. Interestingly, this film is extremely focused on the choirboy’s view of the world and it’s interesting because the exposition leaves out what informs and contextualizes that viewpoint. 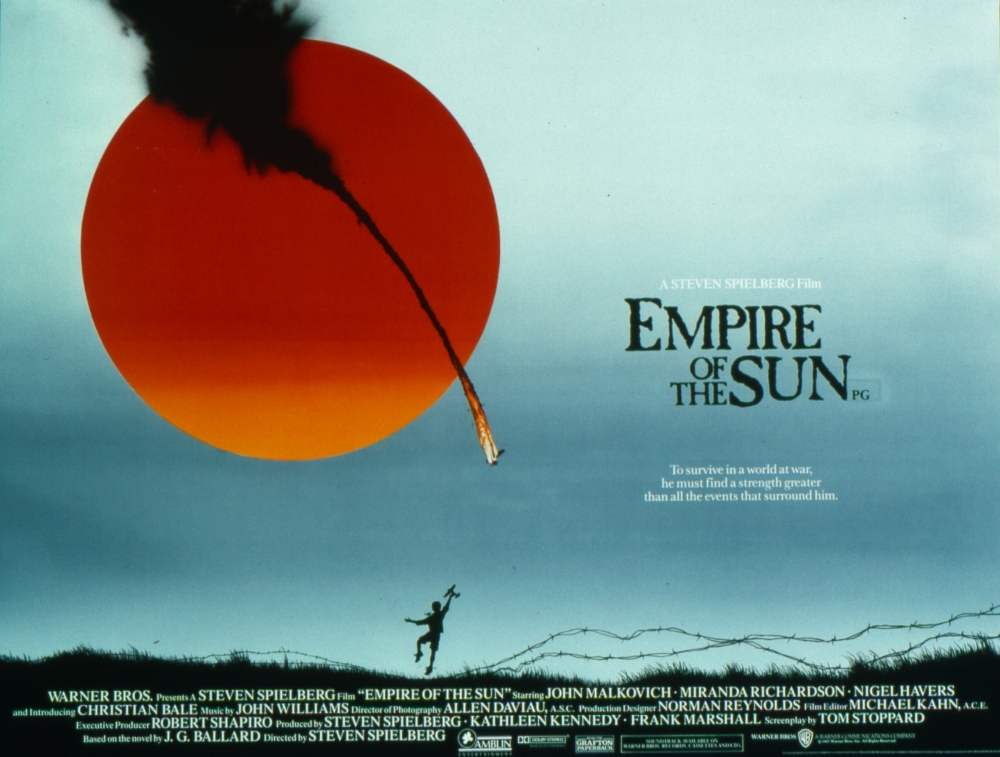 For instance, his worship of the Japanese kamikaze, which entails a fascination with militarism which could be born of his lack of power over his own life in a foreign land where his parents are detached, is inexplicably persistent. Certainly, children become obsessed with certain things. But this kid goes out of his way at an elaborate costume party to go off on his own and play with his model airplane. The model is a Japanese zero—the kamikaze’s fighter plane used in the sneak attack that destroyed Pearl Harbor—but why this child is drawn (and encouraged) to worship it remains elusive.

In any case, the zero is what fuels Jim’s imagination, allowing Mr. Spielberg to juxtapose the horror of war with the beauty of life and love. He did this, too, in 2005’s atrocious Munich. There are echoes of several future Steven Spielberg motifs, notions and themes here: the scrap and random subsequence in war of 1998’s Saving Private Ryan, the smoke, ash and nonstop death of 1994’s Schindler’s List, the pacifism and equivocation of 2011’s War Horse and Munich.

Other scenes are as warm, potent and majestic as only Steven Spielberg (Jaws, The BFG, The Sugarland Express, E.T.: The Extra-Terrestrial, Always, Bridge of Spies, Hook, Jurassic Park, Lincoln, Raiders of the Lost Ark) can produce. A thief’s slap of contemptuous envy, a promotional mural for David O. Selznick’s Gone With the Wind as Shanghai falls to the Japanese, learning the word ‘pragmatist’ while learning the cost of living by doing only what’s convenient in the moment, the imagined fancies of a traumatized child in captivity—all and more make Empire of the Sun immensely watchable.

But the film impresses for what’s left off the screen, too. How Jim survives imprisonment in terms of food, clothing and shelter are clear, as Jim trades on material possessions and cigarettes, however, how he relieves himself (apparently, he doesn’t) is left untold. There’s also—in retrospect, not surprisingly—very little of the Japanese in Empire of the Sun, which is based on the war memoir by J.G. Ballard, adapted by playwright Tom Stoppard and produced by Kathleen Kennedy and Frank Marshall. In fact, the imperial Japanese were voraciously mystical and religious—like today’s Communist North Koreans, they worshipped a state dictator as a deity—brutal and barbaric. But Mr. Spielberg omits any serious and lasting references to such key facts, which are crucial to grasping Japan’s empire, invasion of China and lust for war with the West.

Yet his Empire of the Sun, unlike the tribalist Schindler’s List, focuses on the individual. “You’re an American now,” a gruff but decent scoundrel (John Malkovich) tells Jim during internment, and, for all the dodging and hustling Jim does, he means it as a compliment, signalling a turning of the tide in war. This is another Steven Spielberg imprint; jaunty Americanism matched by what’s regarded as a fundamental emptiness in what makes an American—specifically, that he’s self-made, especially through trade. Empire ties this theme into its final frames.

Seeing himself in a Japanese boy he tries to save, catching a Hershey’s bar and manmade goods that fall from the sky as hallelujahs play in song (on a score by John Williams), Jim the boy finally faces reconciling what he’s been through even as he’s forced to march or die. That Jim goes from worshipping self-sacrificing Japanese to cheering self-reliant Americans doesn’t mute that he also makes himself something of an easterner who discards his possessions and begins a postwar childhood devoid of idealism. The boy’s romanticized empire marches in, gets real, and dissolves. Jim’s cherished Empire of the Sun comes to an end.

Leaving gaps while immersing the audience in the color of bomb blasts and the rising sun, Steven Spielberg counters his early movies’ benevolent intimacies with a hollow if stunning epic about the wreckage of a boy’s sense of life.