This summer’s movies or their ads have left me unimpressed, so I was thrilled to see Steven Spielberg’s Close Encounters of the Third Kind return to movie theaters for the film’s 40th anniversary. I had seen it in theaters when I was a kid. And again in 1980 when it was re-released with new scenes. I eagerly bought tickets to see it this week at the Cinerama Dome, where it premiered in 1977. It turns out other Americans are more excited about old movies, too. Box office receipts were better for Close Encounters of the Third Kind than for at least one new major movie. I’ll do the same when Mr. Spielberg’s ET returns to movie theaters later this month and, given today’s glut of lousy and mediocre movies, I expect good returns for that, too. 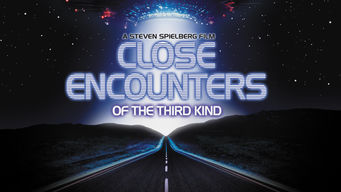 Written and directed by Steven Spielberg (Schindler’s List, Jaws, ET, Lincoln, Empire of the Sun), Close Encounters of the Third Kind packs a lot into its two hours plus running time. Mr. Spielberg is correct in his featured, pre-screening comments showing that the 1977 hit is not an example of science fiction, unless you regard life other than on earth as impossible. The broadest formulation of his theme is that we are not alone. Strictly speaking, this is also a theme of Stephen Sondheim’s Into the Woods.

Like that play and movie, music is fundamental to Close Encounters of the Third Kind. The song “Comin’ ‘Round the Mountain” suggests the first sight of alien spaceships. The classic “Chances Are” by Johnny Mathis and Budweiser’s cheery Seventies TV ad jingle, which follows a shot with a can of Bud, seed the subversion of the era’s dominant cultural ethos in favor of sweetness, benevolence and defiant, can-do Americanism. Listen for hints of composer John Williams’ distinctive 1975 Jaws theme. Of course, music is central to the movie’s plot about alien connection, communication and communion. And, if music foretells what’s to come in Close Encounters of the Third Kind, and it does, the director’s trademark blend of drama, suspense and terror heightens the story’s darker theme of alienation.

That said, Close Encounters of the Third Kind begins with a moving picture of two bright lights in a swirl of confusion. This is the film’s essence, which is a new, joyful, hard-earned enlightenment.

The audience is gradually immersed in a North American desert during a murky sandstorm. This symbolizes both the mystery of aliens that envelops and draws the audience into a multi-colored, musical finale and the post-counterculture era’s deep, mass confusion in the mid-1970s. “Are we the first to arrive here?” is the first spoken line of dialogue. It is an urgent question delivered seriously, insistently and repeatedly. Appropriately, there’s a Land Rover. Then, there’s a critical sequence involving Air Traffic Control which establishes the cultural context of insidious conformity, echoing skepticism. Then, the picture moves to the main midsection setting: the American Midwest. Riffing on the film’s unique integration of humor, tension and fear, a flirtatious and dangerous scene between Angie Dickinson and Earl Holliman from NBC’s Police Woman airs in the background.

Enter a young boy named Barry (Cary Guffey) and his mother Jillian (Melinda Dillon) in a Muncie, Indiana, home filled with Mr. Spielberg’s pre-Poltergeist consumer goods — toy police cars, an American Airlines jet, a race car, trucks, that sort of thing, probably more toys than the typical middle class Midwestern toddler possessed, even 40 years ago, before toy shaming took hold. The scenes are an important marker. Barry’s self-starting toys represent the essence of what quality the aliens may seek in those they invite for communion: individual imagination and wonder at the world. Shifting to a government worker Roy Neary (Richard Dreyfuss before he played Pete in Mr. Spielberg’s Always; after he played Hooper in Mr. Spielberg’s Jaws) at home, another connection is made; here, too, the male is blissfully full of wonder and joy at the world — he plays with model trains, he finds good in Walt Disney’s Pinocchio — but Roy Neary’s domestic scene is more burdened than the boy’s home, where Jillian adopts a relaxed, more laissez-faire approach to parenting.

Roy represents the core conflict in Close Encounters of the Third Kind. Contrary to the single-parent Indiana home, which tellingly is more conducive to the happy child, it must be noted, Roy’s nuclear family home is chaotic, filled with Mr. Spielberg’s post-Jaws family strife. Roy’s second-hander wife (Teri Garr), frankly, if you think about it, is not remotely interested in being intimate with her husband. She makes reference to their romantic past, sure. But it’s only in the context of an outing Roy intends as a moment of family unity to repeat the experience of his recent close encounter, this time sharing the wonder with his wife and kids. If Roy goes batty while obsessing after encountering an unidentified flying object (UFO), and he does in a sad subplot on the wreckage of mental illness, it’s not exactly Roy who vacates his marriage and family.

The adult’s intensely violent, invasive and invigorating encounter with an alien spaceship, again cued by twin lights, powers Close Encounters of the Third Kind. Thanks to Richard Dreyfuss (Lost in Yonkers, Whose Life is it, Anyway?, Mr. Holland’s Opus, Silent Fall, The Goodbye Girl), an outstanding actor who’s portrayed fraudulent businessman Madoff, Secretary of State Haig and Benjamin Netanyahu’s heroic brother in Israel’s 1976 ingenious raid on Arab terrorists, this insightful performance fully engages the audience in spite of its excess.

Steven Spielberg spins the tale of the detached, disaffected modern American idealist (an angry and downtrodden white male, incidentally) driven by forces beyond his control to madness, casting three Midwesterners into a generic world of Big Government conspiracy, complete with secretive helicopters, decoy trucks, faked national disasters and the United Nations. As he does, the lone individualist’s conflict gets a deeper dimension with hordes of Indians pointing to the sky, pop culture’s Marvin the Martian and Star Trek‘s USS Enterprise and an idealistic, intellectual Frenchman (perfectly cast writer, director and actor Francois Truffaut) who is the fountainhead of the impending ultimate close encounter. Truffaut’s Frenchman, Lacombe, represents the honest, diligent and scientific intellectual pursuit which accounts for the wonder and imagination of discovering the unknown. When Lacombe first faces the inconvenient, incontrovertible fact of Roy Neary’s intrusion on his plans, the philosopher-scholar asks the utility worker … if he is an artist. These two form an abiding bond for harmony.

Steven Spielberg’s Close Encounters of the Third Kind — a remarkably cinematic achievement with striking photography and deft screenwriting — balances wonder with terror, too. The scenes in which Barry is seized from his mother are terrifying. The scenes in which Barry’s mother and Roy Neary attempt to reunite in a herd of frenzied humans is horrifying. As the one, matching with another one, like Liberty and Equality in Ayn Rand’s novelette, Anthem, is swept away and lost in a mob of the many that are herded and fooled by the state, they’re rounded up for an uncertain outcome. That two freethinkers escape government control in that gas-guzzling, distinctly American symbol, the station wagon, breaking down not one, not two, but three government barriers, only to face barbed wire and press (not just carry) on to demand an encounter they know they have earned, goes to the undeniably affirmative, pro-American middle class sensibility of Steven Spielberg’s early movies.

“An answer!” Roy Neary calls out when captured, detained and interrogated by the government which asks what he seeks. Daring to ask a question of his own, he rises up and demands to know: “Who the hell are you people?!?” This is an expression of the film’s American ethos in a strong, powerful and emotional turning point which demonstrates that he who gains knowledge must seize the day, rise, speak up and defy the state. This is true down to three brave strangers who venture forth to disobey the government. “I must find out what’s going on,” one character asserts at a certain point. The movie’s iconic Western landmark reflects in a window as Lacombe’s childlike eyes brighten when the three make their escape, revealing his own secretly held rebelliousness, hinting at a deeper human, and, possibly, non-human connection to come; between Roy and Jillian, between Roy and Lacombe, between child and alien.

Whatever its flaws, from the Peanuts parents-like gibberish of the alien mothership, a bombastic soundtrack and an inexcusably incongruous inclusion of a priest which almost derails the movie’s innocence, Close Encounters of the Third Kind is as indelible now as it was when it played 40 years ago. This renders Mr. Spielberg’s intention — that the movie he first imagined with an early scipt in 1973 during the peak of press coverage of President Nixon‘s Watergate scandal would depict what happens “When You Wish Upon a Star”, in his words, borrowing Jiminy Cricket’s and Walt Disney’s theme song — a success.