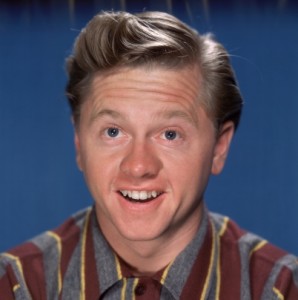 From the Andy Hardy movies to his appearance as a security guard in Night at the Museum (2006), Mickey Rooney, for all of his wives, antics and flamboyance, was an actor who was capable of creating memorable characters in strong performances. I think I first noticed him during a TV showing of his movie Captains Courageous (1937) with Spencer Tracy, an excellent and powerful film to this day. I was always moved by his volcanic performance as Whitey in Boys Town (1938), also with Tracy as a Catholic priest, in the climactic scene when hero-worshipping Pee-Wee is downed. Rooney as Whitey makes the tragic scene feel like a sock to the stomach.

Whether he was playing iconic title roles in Young Tom Edison or The Adventures of Huckleberry Finn, and later as an old horse trainer in The Black Stallion (1979), and even in those silly Andy Hardy pictures with Judy Garland, he was always a jaunty or pugnacious screen presence. He had an energy that was quintessentially American. The obituaries describe Mickey Rooney, who was 93 years old when he died this weekend, as America’s boy next door. But really he was more than that. He used his voice to perfection in several animated or stop motion Christmas movies for TV. He used his foulest language in new types of villainous roles in pictures such as The Domino Principle (1977). He became something of a regular guest like the late David Brenner or writer Truman Capote (whose novel Breakfast at Tiffany’s was adapted for the film in which Rooney played a racial caricature that does not age well) on The Tonight Show Starring Johnny Carson. He played on Broadway in Sugar Babies and on TV as a mentally retarded man in Bill. Rooney could play opposite Elizabeth Taylor in National Velvet and Judy Garland on her own TV show. The Brooklyn native had a rare, remarkable career.

Whatever his real personality and pitfalls, Mickey Rooney had talent and he was committed to a career of singing, dancing and acting, crafting roles that inspired generations of plucky – or sneaky – boys and cantankerous if wise old men. As an archetype, he embodied the spirit of a scrappy American youth, stealing away with a runaway slave down the Mississippi River or telling Father Flanagan off, getting naughty with Johnny Carson or nasty with Gene Hackman, or creaking with wisdom for Rudolph the Red-Nosed Reindeer or a boy who wants to ride a stallion to victory. Shirley Temple Black was recently lost, too, and she was another child star who indelibly marked an American cultural standard that disappeared long ago. Mickey Rooney’s death marks the end of a line that traces back to Hollywood’s Golden Age.