Francis Ford Coppola (The Godfather) revised his 1984 motion picture, The Cotton Club, for its 35th anniversary. The result, which I am unable to compare to the original, because I never saw it in either theatrical or home video release, is spectacular.

This doesn’t mean that The Cotton Club (encore edition) is perfect. It isn’t. But The Cotton Club (encore edition) is gorgeous. Song and dance scenes offer rare and exquisite entertainment. Besides Taylor Hackford’s anti-Communist thriller, White Nights, I can’t think of another movie in the past 50 years with tap dancing as integral to a coherent story.

To borrow the film’s slightly sordid Harlem style, every major character in this gangster-themed musical either wants a piece of ass or a piece of the action. This is Mr. Coppola’s first movie, which was made and financed by very contentious principals, such as the late Robert Evans, and micro-studios, such as the defunct Orion Pictures, after his self-financed 1982 musical debacle, One from the Heart.

The Cotton Club centers on Harlem’s famed nightclub of the same name, which, in reality, if not here, featured exclusively Negro artists singing and dancing for exclusively white audiences. The plot encompasses the period from the Twenties Prohibition era, when black market alcohol sales flourished for better and for worse, arguably for worse, through the Depression. With three main actors, Gregory Hines (White Nights), Diane Lane (A Little Romance) and Richard Gere (An Officer and a Gentleman), the story unfolds at upper Manhattan’s swank jazz club.

The Cotton Club’s reputation for being a disjointed hybrid of jazz extravaganza and mob movie is undeserved, judging by Francis Ford Coppola’s restoration. The truth is that it’s a relatively seamless stitching of twin tales of two sets of brothers — one white brethren, one black brethren — with emphasis on two of the men’s love for two different women. The central men (Hines and Gere), whose loves and endeavors climax at the club, are artists; one tap dances, one plays an instrument.

That’s the gist of The Cotton Club. Much of it is earnest. Most of it is well done. Parts are not. The remainder is split between upper mediocre and lower mediocre. The latter includes Lane’s flat performance.

Mr. Coppola, whose movies valiantly attempt to portray epic stories, really puts on a show. Whatever this movie’s history, which I deliberately averted knowing about in advance for the purpose of writing this review, The Cotton Club is a labor of love for American jazz, tap dancing and Harlem subculture and show business. Like his peers, fellow blockbusting directors Steven Spielberg, George Lucas and Martin Scorsese, he tends to lay on too much movie for its own good.

The Cotton Club (encore edition) is another example. Besides corrupt police, gang wars, Bob Hoskins and Fred Gwynne as gangsters who are also best friends, Lane as a vacuous mob groupie and Gere as the smooth and hard cornet player drafted as a mob lackey who pursues her, there’s more. Plot points include a bombing, grisly murder — as blood drips from a chandelier — man slapping woman during a dance, confessions of a gigolo and racism at the Cotton Club.

All of this happens to music by Fats Waller, Duke Ellington and Louis Armstrong, among others. By the time someone tags “Jazz” as an explanation of wild ways, it adds up, despite wooden lines and acting.

This is thanks to Francis Coppola’s commitment to depicting jazz as an appealing, if subversive, cultural achievement. With painted eyelids, shadowed faces during lovemaking in the rain and magnetic tap dancing — including scenes with a Nicholas brothers-like duo and an old preacher breaking into routine — The Cotton Club’s production values elevate the spectacle. If the plot lacks, and it does, the show dazzles.

The tap dancing Negro, portrayed with zest and eminence by the late Gregory Hines, falls in love with an interracial torch singer (Lonette McKee) who’s “passing” as white. If you can imagine the indelible “Stormy Weather” as deft punctuation, you get a sense of the dual plot lines and love at stake. Mr. Coppola’s apparently restored the film to a movie in which black characters get their due. 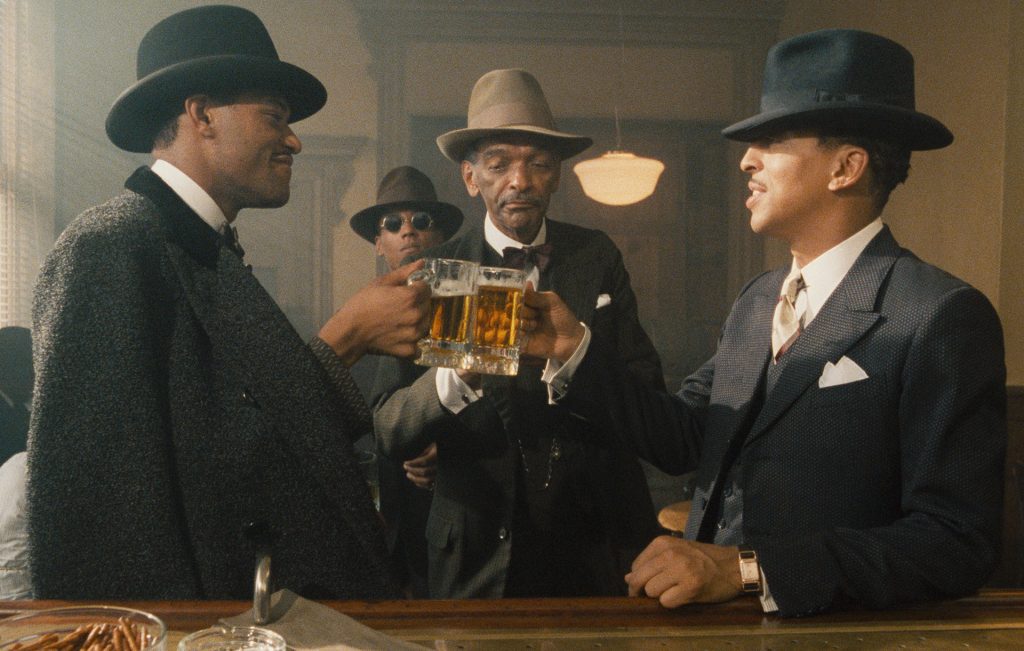 Capped by classic Hollywood transitional titles and an Andy Warhol darling as the semi-glorified thug Lucky Luciano, with John Barry (Born Free) as composer, Henry LeTang, who also dances, as tap choreographer and James Remar as the monstrous villain, The Cotton Club’s excesses ultimately align with Francis Ford Coppola’s bloodstained romanticism to pull off a uniquely American show of jazz.