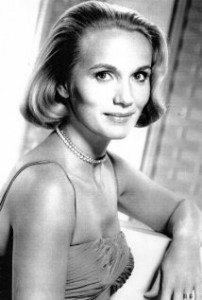 Watch Turner Classic Movies (TCM) this Monday night (March 31) at 8 pm ET for an hour with actress Eva Marie Saint, interviewed by TCM host Robert Osborne. The conversation was recorded during the cable channel’s 2013 film festival and Academy Award winner Saint talks about her longtime marriage to director Jeffrey Hayden, who sat in the audience, her kids, one of whom she says had a crush on Yves Montand and became his pen pal after filming Grand Prix, and her career including her standout performances in three seminal movies: Elia Kazan’s On the Waterfront (1954), the ill-fated Civil War epic Raintree County (1957) and Alfred Hitchcock’s North by Northwest (1959), each of which TCM airs following the premiere.

Saint discusses struggling as a young actress in New York City, where she was cast in the Broadway production of Mister Roberts, starring Henry Fonda, a role she reports she lost in an emotional rejection that shaped her approach to success. At one point on stage with Osborne, who reads from a rare Life magazine profile of the pre-stardom artist, the then-88-year-old Eva Marie Saint turned to the affectionate audience and advised them to take care of themselves by expending energy each day as if it’s sand in an hourglass. Saint also remembered working with her lifelong mentor Lillian Gish in the 1953 Broadway production of The Trip to Bountiful, her favorite director Elia Kazan, who launched her film career in earnest with On the Waterfront, for which she won an Oscar® as Best Supporting Actress, and training at the Actors Studio, which Kazan had founded in 1947.

She fondly recalls and reflects upon co-stars Marlon Brando, whom she says she believe may have lost the joy of acting, Bob Hope – “he was wonderful” – Montgomery Clift (“such a sweet man, very quiet”), fast driver and Grand Prix co-star James Garner, Exodus co-star Paul Newman and, of course, her legendary co-star in North By Northwest, Cary Grant, whom Saint describes as “so giving.” Her memories of working with Hitchcock are captivating: “He didn’t get into the feelings or the depth of the character [Eve Kendall]. It was how she looked, what she wore – the hair, the makeup, the color of the lipstick, the necklace, the gloves, everything about her.”

As always, Robert Osborne brings out the best in his movie star guest, observing that Eva Marie Saint still possesses “the same enthusiasm as that Eva Marie Saint who walked the pavements of New York.” Reflecting on her longevity, she tells her host that “The longer you live, the smarter you get, because you’ve been around, you’ve seen things, you’ve gone through different emotional experiences in your own life and hopefully you understand things better. And that makes you a better actress.”

Among her pictures are A Hatful of Rain (1957), The Russians Are Coming! The Russians Are Coming! (1966), All Fall Down (1962), The Sandpiper (1965) and Loving (1970). Her leading men include Gregory Peck, Warren Beatty, Richard Burton and Burt Lancaster. Saint attended Bowling Green State University in Ohio, where she was part of the Delta Gamma sorority, which she playfully plugs in the interview, with the goal of becoming a school teacher and, after switching to acting, she was cast in her first film, Kazan’s On the Waterfront, after Elia Kazan saw her in A Trip to Bountiful on Broadway. Her stage credits include Summer and Smoke, The Rainmaker, Duet for One, First Monday in October and The Country Girl. On television, she appeared on Frasier, Moonlighting and The Love Boat and had roles on ABC’s anorexia nervosa telefilm The Best Little Girl in the World and on NBC’s miniseries A Year in the Life. Saint earned Emmy® nominations for Middle of the Night (1954) by Paddy Chayefsky, ABC’s miniseries How The West Was Won (1977) and People Like Us (1990) for NBC. Other TV roles include performances in Fatal Vision (1984), When Hell Was in Session (1979), with Hal Holbrook as Vietnam War prisoner Jeremiah Denton, and as Marilyn Klinghoffer in Voyage of Terror: The Achille Lauro Affair (1990) with Burt Lancaster as her handicapped husband Leon, who was brutally murdered by Arab terrorists that hijacked a cruise ship. Saint recently portrayed Clark Kent’s mother in Superman Returns (2006) and she appeared in this year’s Winter’s Tale.