Walt Disney’s The Jungle Book, an animated musical loosely based on Rudyard Kipling’s stories, is a benevolent outing. The 1967 movie follows a child named Mowgli (Bruce Reitherman) from infancy through boyhood. 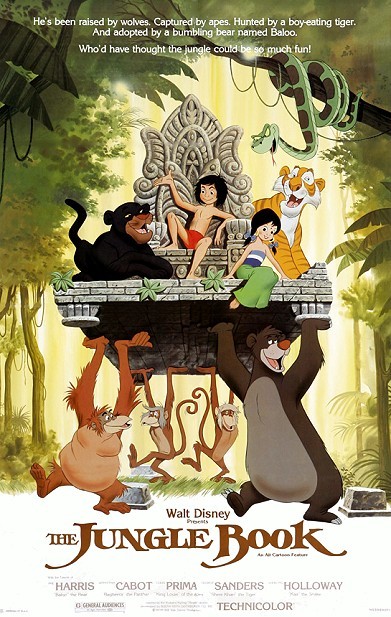 Each encounter takes place in India’s wild jungle—with animals and a setting rich in shades of orange, dark gray and green—where deadly threats come with the territory. Scrawny Mowgli starts life as an abandoned baby whose cries are heard by an especially sensitive, intelligent panther with the stately name Bagheera (Sebastian Cabot), who immediately recognizes the human’s need for nourishment. Bagheera safely sets Mowgli down with a family of playful wolves.

Eventually the pack mentality drives the youngster—known in these parts as a “man-cub”—back to tender but firm Bagheera and The Jungle Book is, in essence, an exotic story of surrogate parenting. Big, lovable poppa bear Baloo (the distinctive Phil Harris), a gravelly–voiced bum, moseys in and teaches Mowgli life’s “bare necessities.” Translated in a jaunty melody, it means: relax and live in the moment.

Of course, the man-cub will need more than that recommendation to survive and Bagheera knows it even if Baloo is a bit slow on the uptake. The plot trots along with a looming villain—Shere Khan, a man-eating tiger, in the dripping voice of All About Eve‘s George Sanders—that makes his first appearance an hour into the movie.

Until then, Mowgli marches, giggles and mopes like a typical kid, sparring with bickering Bagheera and Baloo, and finding himself mixed up with an orangutan (Louis Prima) and monkeys and one predatory python (Sterling Holloway), tempting the boy to “slip into silent slumber.” Mowgli’s response to the snake, which awakens Mowgli to danger and to his own efficacy, marks his transition from baby to boy. The slithering scene is set to the Sherman brothers’ clever “Trust in Me.”

Such fun-filled lessons are lightly embedded along Mowgli’s path, which leads to the man village. Directed by Bagheera, coached by Baloo, Mowgli becomes aware of his uniqueness and learns the risk of breaking free too soon. In colorful characters, songs in rhyme and easy laughs—amid waterfalls, butterflies, elephants, bananas and cocoanuts —The Jungle Book leisurely leafs through its story with loping Baloo dubbing his buddy “li’l britches” like he’s John Wayne and teasing Bagheera (“Baggy”) to “get with the beat.”

When the clash with the menacing tiger occurs, Mowgli knows enough to go one on one with Khan, whose dry, sinister manner prefigures another Disney villain, The Lion King‘s Scar. Having discovered first-hand the value of overcoming fear, being a friend and earning trust—and having pretended to be a bear and a bird—Mowgli finally accepts that which makes him human: he uses his mind.

Before the end, everyone from a band of British mop-top vultures to Bagheera and Baloo, who are ferocious when necessary, rallies to a good time. Except for a flat ending in which lively Mowgli is beckoned in beautiful song by a village girl into premature domesticity (he’s only ten), the jolly Jungle Book closes with the journey completed—making one instantly want to start over and enjoy it again. 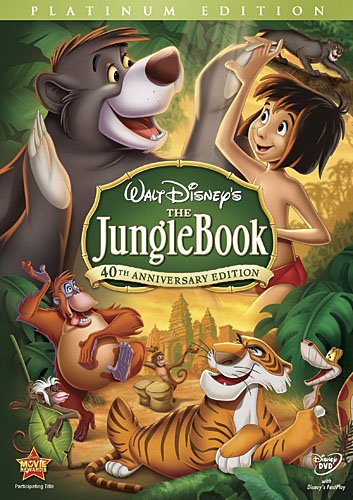 This amusing 78-minute movie is the Disney studio’s newest Platinum Edition DVD—a status reserved for classics—and it is a slight improvement over the last Platinum entry, Peter Pan. Twin discs in a latch-case with decorative slipcase and a navigational booklet contain scads of bonus material.

Parents who want their kids to read books and truly enjoy movies may want to start with the 15-minute Disney’s Kipling: Walt’s Magic Touch on a Literary Classic, an informative account that fosters an appreciation for animation and for Rudyard Kipling’s original works. Here, we go from development in 1963 to key departures from Kipling’s stories—with Baloo as a more serious brown bear, a possible long-lost mother to whom Mowgli feels connected, a ruthless hunter aiming for Shere Khan and two incarnations of Mowgli’s encounters with the opposite sex. The feature includes fine book illustrations.

After watching the movie, DisneyPedia: Junglemania! is recommended, despite its butchering of the word encyclopedia (the misspelling of rhinoceros goes unnoticed on the edition’s closed captioning subtitles), and the usual environmentalist messages. Junglemania! explores whether bears really populate jungles (some do) and defines a panther—a leopard that’s black—noting that the sleek animal is, unlike Bagheera, nocturnal.

Games, commentary and a short salute to legendary animators Frank Thomas and Ollie Johnston (which aspiring animators won’t want to miss) round out the extras. Red icons and small print don’t make menus easy to follow but the content’s general organization is good.

Do not skip Terry Gilkyson’s seven deleted songs—enjoyable in their own right. The childlike “In a Day’s Work” with a fine piano solo is perfect for sing-alongs. The Beatles-esque tune originally conceived for the vultures is arguably better suited to the scene than the barbershop tune in the final version. A “Bare Necessities” demo hints at a more interesting story and the requisite Disney travesty is included in a modern music video calamity.

The Bare Necessities: The Making of The Jungle Book (46 min.) is the 40th anniversary edition’s best asset, though there’s not nearly enough about vocal performers Cabot—integral to the movie’s success—and indelible Harris, who was brought on by Walt himself. Of course, the master was not infallible; he wanted to snip “The Bare Necessities” from the movie, as we learn here. Disney animator Bill Peet, who started the project, gets proper credit. Participants are too numerous to mention but include Walt Disney biographer Neal Gabler, who doesn’t add much, and animation historian John Canemaker, who does.