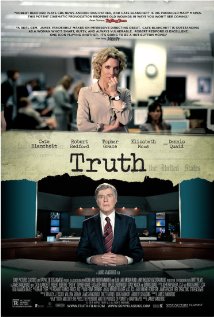 Truth co-starring Cate Blanchett (Cinderella) and Robert Redford (Captain America, An Unfinished Life) is at best a cold, hard character film about today’s journalism. Don’t make the mistake of thinking that you need to recall every detail or even the headline about the 2004 CBS News story by Dan Rather (portrayed here by Mr. Redford), with producer Mary Mapes (Blanchett), that brought Rather down. Part of Truth‘s point is that today’s shouting match, agenda-driven news business overemphasizes trivial details at the expense of solid, investigative reporting.

Asking questions, probing for closer scrutiny of those in power—demanding to know the truth—is the theme of this two-hour tale of a report about President Bush that came apart if not necessarily undone. The movie’s carried all the way by Blanchett as an intense and passionate but hard and myopic producer. Beginning and ending with the 2004 presidential election, an event in which journalism ought to matter the most, she wants the story of a National Guard scandal surrounding George W. Bush’s dubious service so bad she can smell it.

But there’s only a whiff. Truth concerns what it takes, with her “crack” team (Mad Men‘s Elisabeth Moss, Topher Grace, Dennis Quaid), operating within the early 21st century’s toadying corporate news media that kiss up to government, to do the reporting and get the story just right. CBS News anchorman Dan Rather, depicted here as a sort of journalistic godfather, is on stand by to go live when Mapes and company have the goods. What happens as the story unravels, with Bruce Greenwood (Capote, Eight Below) as a top CBS suit and Stacy Keach as a key source, shows both the left-wing bias of modern news media—Mapes, Rather and team are guilty as charged—and the less apparent fact that the freedom of the press to be biased and pursue an angle, whatever its predisposition, is crucial in a free society.

If Truth doesn’t exactly dramatize why establishing whether Bush dodged the draft, obtained special favors through his powerful government family and influenced or controlled the press, it shows how it is likely. Especially when you realize watching a Bush press conference video clip that almost every jibe, dig and sneer at the media is part and parcel of today’s corrupt Obama administration, down to exact words about troops in Afghanistan and the war in Iraq. Truth matters, writer-director James Vanderbilt (The Amazing Spider-Man) proposes in Truth, it matters very much, and even when pursued by the shrill and the pompous—as Blanchett constantly runs her hands through her mop of hair—on the left or the shrill and the pompous on the right, the people ought to take truth seriously. Truth shows how and why the people do not, chiefly through Blanchett as Mapes, a damaged woman with a reason to be hard-charging whatever her flaws. Rather, too, in this incarnation, though never as straight and concise as Harry Reasoner or Walter Cronkite, comes off as a simple Texan driven by curiosity above all who, it should be remembered, was disgraced by CBS News only to be hired by Mark Cuban, who is hardly part of the vast left-wing, or, for that matter, conservative, media conspiracy.

Think about what matters and stay true to the pursuit, Truth argues, in powerful family scenes which ought to remind today’s jaded audiences the high cost of being a journalist, blogger or truthseeker, and challenge everyone in power, though Truth abbreviates this as FEA (which I figured out well in advance and you probably will, too).

“Who the f— are you people?!?” A taxi driver asks as three broadcast journalists under fire climb in as the media frenzy turns on itself instead of on those running the government. Truth answers this question and reminds the audience what value such people are to the governed.