The Post manufactures its own spin on the true story of the publication of the Pentagon Papers, thousands of copied top secret pages disclosing the U.S. government’s systematic deception over the Vietnam War, to fit what redounds to a feminist perspective. This drama by Steven Spielberg (E.T.) may be the first major post-sexual harassment claims hysteria movie, given its director’s stature, though the proto-feminism of Star Wars: The Last Jedi arguably merits that distinction. If you can stand this shift, which tilts the movie’s plot, performances and theme, The Post capably depicts brave and decent acts of journalism. 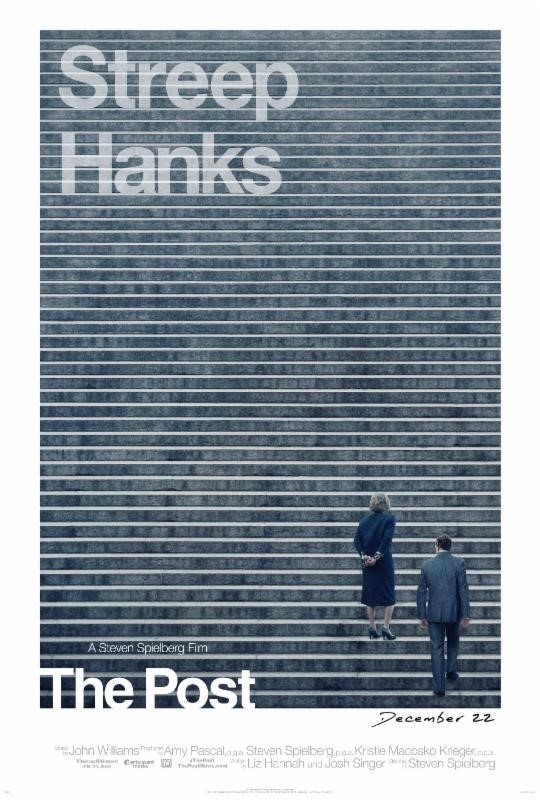 But The Post is not Mr. Spielberg’s best work and, unlike the dignified Lincoln or like his tunnel-visioned Bridge of Spies or his dismal Munich, it lacks crucial context and essential dramatic points. As Washington Post publisher Katharine Graham, Meryl Streep is, as usual, overly mannered, this time to distraction. Her Graham is less like a real human being and more like Meryl Streep (The Iron Lady, Kramer Vs. Kramer, Into the Woods), all facial tics, fidgeting and halting, breathy playacting. It’s one of her worst performances and that’s saying something because Streep is already the most overestimated actress of our time. Tom Hanks (Sully, Philadelphia, Saving Private Ryan), on the other hand, in the less showy role, performs as well as can be expected as Kennedy crony and Post editor Ben Bradlee. Hanks is largely confined to what amounts to impersonation, a few mini-speeches and gruff concern, hobnobbing and consternation. Both leading actors give the net impression with this script that this is not at all how Graham’s and Bradlee’s decision-making and conferences over publishing the historic papers really happened.

An opening ambush scene in the wet jungles of Vietnam provides the only hint at what ought to drive any serious movie about Daniel Ellsberg’s act of defiance against the government to reveal shocking truths about what the military and executive branch knew was a futile, unwinnable war in Indochina. But other than tossed in references to soldiers, the heft of what values were at stake in 1971 are never sufficiently dramatized to the necessary degree.

What’s left is a sometimes stagy, sometimes skillful, newspaper suspense about the urgency of exercising the right to free speech (in this case, defying the status quo with the free press). The Post scores its best scenes when depicting the incestuous connection between members of the press and government officials, an incestuous link which climaxed under the Obama administration, the presidency which most closely resembles the Nixon presidency depicted here, not just because of the readily apparent parallels with Obama’s stubborn, anti-American, horrifying persecution of journalists, Apple and the heroic Edward Snowden.

Streep’s Graham is rarely shrewd or intelligent, which strikes me as far from the truth. For a widow who inherits her wealth, she chiefly spends most of her time plagued by self-doubt, which makes her sudden, abrupt decision to publish the papers seem more strikingly random and emotional, at least as portrayed by Streep. Her defining characteristic is her comfort with cronyism, complete with parties and lunches with big shots such as the former secretary of defense (Bruce Greenwood, Eight Below) most responsible for the highly irrational Vietnam War quagmire. Graham’s best line — “it’s my company” — goes completely unearned on The Post‘s terms. There’s not a single moment or scene in which she shows real interest in the creative byproduct of her newspaper, let alone making money from it.

Details of the tense hours leading to the article’s publication provide some of The Post‘s most compelling drama, though it’s muted by the focus on Graham, which takes up most of the screen time. Long takes of dogged research and lawyering at Bradlee’s home, where his wife and kid serve sandwiches and lemonade (reducing Sarah Paulson to wifely, if empathetic, sisterhood), sustain interest in these makeshift smoke-filled rooms. But newsroom scenes are dreadfully dull and uninspired, as if Mr. Spielberg consciously avoids comparison to All the President’s Men and other newspaper-driven movie classics. The Washington Post‘s competition with the New York Times similarly gets drifted (read the truth of the Pentagon Papers publication, including the Times‘ great Abe Rosenthal, here) in the Bradlee-Graham vs. old boy network paradigm shift.

The Post is not a bad movie. There’s a plot, benign characters with a sense of purpose and clear progression. But what drives the tale of reporting the Pentagon Papers in defiance of the state and the recent history of a whistleblower and those who amplified his whistling are too obviously and conveniently — and much too histrionically — downsized and revised to depict what should be spine-chilling drama. And isn’t.