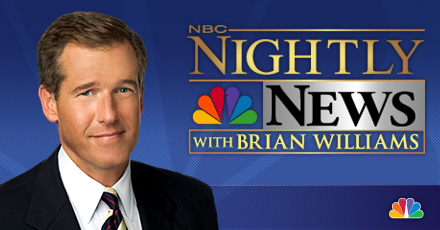 NBC Nightly News anchorman Brian Williams apologized for falsely recalling events during an incident in 2003 during the Iraq war in which he had asserted that a U.S. Army Chinook helicopter he was traveling on was under fire and shot down by the enemy until rescued by an Army unit. It turns out that the aerial vehicle may have been under fire (though this, too, is in dispute) and that was about it; the helicopter was not shot down as he had claimed and he was not rescued as he had described (read the Stars and Stripes report here). His false assertions have reportedly been made for years, as recently as last week, and appear, in light of the fact that another U.S. helicopter in proximity was shot down by a rocket-propelled grenade, to have been conflated and/or embellished.

The Brian Williams apology is another setback for the damaged NBC News brand, which has sustained many major mistakes and subsequent apologies from NBC and MSNBC personalities in recent years.

I do not watch Brian Williams or NBC Nightly News enough to judge or gauge his reputation. However, as a journalist, I am inclined to grant Williams the benefit of the doubt; it is conceivable that being on a vehicle under siege in combat 12 years ago became conflated in his mind with another vehicle which was shot down, especially given his admitted enthusiasm for acknowledging a heroic U.S. Army, which is garnering new appreciation in the wake of the commercial and critical success of American Sniper. I know that Brian Williams, who recently interviewed Edward Snowden, appears regularly on the NBC News joint operation MSNBC and whose daughter recently appeared in NBC’s recent live musical version of Peter Pan, is a former fireman. His claim to be motivated by a desire to recognize heroic action seems sincere.

The real problem with today’s broadcast journalism is the rampant subjectivism, which the Comcast-owned NBC News practices with abandon. Generally, Fox News trivializes, sensationalizes and minimizes the news, while CNN avoids controversy at the expense of reporting facts and lets left-wing bias into its programming, and MSNBC, led by NBC News, is practically an organ of the New Left presidency. While a 2013 report by the Pew Research Center found MSNBC (which has still not corrected its mistake about Ayn Rand) to be the most opinionated, least news-oriented cable news channel, and another study found it wildly biased for Obama, the channel also fired leftist TV talk show host Phil Donahue, whom I interviewed last year, for fear that his principled opposition to the Iraq war would harm its political influence, despite Donahue’s top ratings. Both NBC News and MSNBC employ numerous former and current government workers, political pundits and influence peddlers and their relatives, often without disclosure, such as Alan Greenspan’s wife, Andrea Mitchell, though broadcast news is similarly guilty as an industry.

With news driven by who, not what, there is to know, someone in a prominent position such as Brian Williams was bound to slip and come undone. The anchorman came of age following the highly touted Tom Brokaw, author of the dubiously titled Greatest Generation and embodiment of an influence peddler who made a career of cozying up to those in government power, and Williams has followed in that same path of personality-driven news, which is to say pseudo-journalism. He is not known for breaking news. He is not known for original, cohesive reports or groundbreaking investigations. He gained an exclusive interview with whistleblower Snowden last year and did a decent but not exceptional job. He Tweets, jokes, cajoles, goes all over TV, especially NBC TV comedies and MSNBC, promoting himself and his bland, short, mediocre Nightly News and he became visibly associated with his daughter’s high-profile appearance as NBC’s Peter Pan. None of this evokes Harry Reasoner, Mike Wallace or Walter Cronkite or great broadcast journalists.

It’s not entirely his fault. The line between TV personality and TV journalist is blurred if not eviscerated as journalism has become subjective, not objective, and he is probably encouraged to push himself rather than his ability by the government-favored cable utility that employs him. In a vapid, cynical culture in which a public that favors sneering over reporting does not differentiate between facts and fiction, it should surprise no one that the nation’s top TV news personality doesn’t, either.