Having partly reviewed and previewed, I’ve now seen every episode of Hulu’s 10-episode microseries based on The Looming Tower by Lawrence Wright. The program traces the rising threat of Islamic terrorism in the 1990s and the derailment of the FBI and CIA from preventing it. The title invokes the twin New York City skyscrapers destroyed in the 2001 attack on the United States. These buildings loom like giant ghosts. 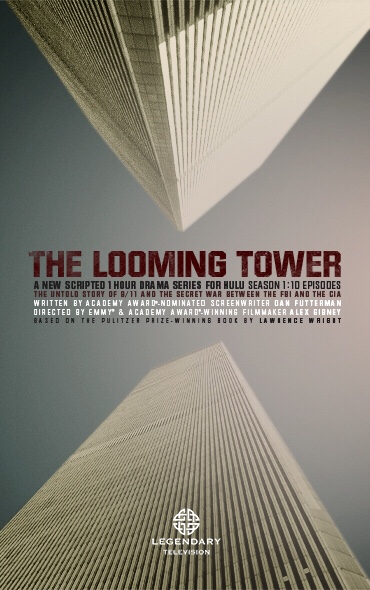 The Looming Tower dramatizes American appeasement, evasions and contradictions. This show is a docudrama, which is to say that it dramatizes key assertions, facts and documentary evidence of the federal government’s total corruption and incompetence, with the exception of the FBI’s John O’Neill (Jeff Daniels, Steve Jobs). As such, this is pure naturalism, so don’t expect any happy endings or silver linings as have been depicted in previous Islamic terrorism-themed productions. As any proper series or movie about Soviet Russia, Nazi Germany or the Holocaust must account for evil and maintain an appropriate tone matching mass murder, The Looming Tower projects the requisite seriousness for the subject matter. In every episode, the cumulative effect builds not on what will happen but how what will happen will be evaded by the U.S. government.

In this case, the fault lies chiefly with the Central Intelligence Agency (CIA), which hoards its data collection, though the national security adviser Condoleezza Rice also bears culpability, as I already knew. The FBI and the rest of the Bush administration does, too, insofar as they deliberately acted with malice toward the very idea of national defense against Islamic terrorism. One of The Looming Tower‘s assets is its depiction of the entire government seeking to avoid, deny or ignore Islamic terrorism or, worse, use it to gain power. This problem has only gotten worse; they’ve dropped the ‘Islamic’ and thus avoid any admission of what moves the enemy.

Unfortunately, insidiously, this problem also infects The Looming Tower. By slowly but purposefully featuring dual tracks of religion in O’Neill’s conflicted Catholicism and his protégé’s occasional invocation of Islam — FBI agent Ali Soufan, portrayed by Tahar Rahim (Soufan also produced the series) — The Looming Tower minimizes the cause of 9/11: religious fundamentalism. The series would have been better off dropping the religious subplot, which adds nothing to the series, and sticking to the facts of what happened, what didn’t happen, and why. Observant Moslem agent Soufan’s using Islam and the Koran to send a terrorist on a guilt trip simply isn’t compelling. Even if, as portrayed, the terrorist Abu Jandal hung his head in shame at Soufan’s Islamic-themed lecture and inquisition, which I doubt, it’s beside the point. The more consistently preached and practiced version or interpretation of Islam is what motivated the hijackers to attack the Twin Towers. The Islamic jihad’s only spread farther since.

As depicted, the CIA’s Martin Schmidt (Peter Sarsgaard) tries to stop the catastrophic attack in advance, as does O’Neill, who was murdered in the Twin Towers. O’Neill had just taken a job as the World Trade Center’s security chief after being pushed out of the FBI. Why? He had offended the American ambassador to Yemen during an investigation of the bombing of the USS Cole. Schmidt’s power-drunk protégé, icily portrayed by Wrenn Schmidt, lied to Congress about her knowledge and actions pertaining to the hijackers. Certain FBI agents, too, are contaminated by evasion of Islamic terrorism and lust for getting status and prestige from concealing data.

The hero of this horror story, O’Neill, went down with the collapse of the World Trade Center, which should have been portrayed and isn’t. Like any dramatization of the National Socialist or Communist mass murder, any honest depiction of 9/11 ought to show the carnage, suffering and horror of what nearly 3,000 Americans, including the man who all but predicted the attack, faced on Black Tuesday. As O’Neill, Daniels is excellent. He’s never out of character. His idealistic cop is always hard driving and thinking ahead, until the end of his life. As Richard Clarke, the only government official decent enough to admit failure and apologize to the American people, which is more than Bush, Rice and Cheney ever did, Michael Stuhlbarg (The Shape of Water, Call Me By Your Name) is good.

But Clarke, Soufan and O’Neill, who by this account sought a proper and meaningful defense of America, are a contrast to most of those working for the government as portrayed in The Looming Tower. By and large, and this is the impact of Legendary Television’s 10-episode series, the women and men of the FBI, CIA and White House lust for power. They do not choose to think. They chose to evade thought at every turn, in every moment, at each crucial opportunity to defend the nation against attack. As the final scene ends in this gripping portrayal of American appeasement of Islamic terrorism, whatever its flaws, I was reminded of the gloomy truth that the U.S. has become less free since 9/11.

Ayn Rand once said: “The human characteristic required by statism is docility, which is the product of hopelessness and intellectual stagnation. Thinking men cannot be ruled; ambitious men do not stagnate.” The Looming Tower captures this sense of despair, loss and nothingness. The series affirms that America is doomed to statism, and that, unless we put more men like O’Neill in charge, Americans have every reason to expect more mass death. In its lazy, unfocused, range-of-the-moment, partying, self-congratulating and shuffling law enforcement and national security complex, America’s government reflects the people Americans have become. Today’s is the government the people, if not O’Neill and those who go against the status quo, deserve. The Looming Tower rightly dramatizes this docility in stark, ashen gray.