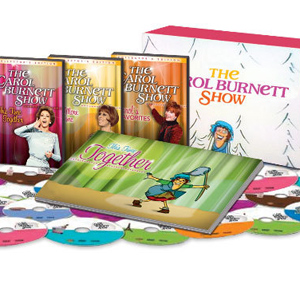 I have mixed feelings about The Carol Burnett Show, which ran on CBS from 1967 through 1978, and a sample – a small sample – of Time Life’s new DVD collection, dubbed The Ultimate Collection ($99.95 for 25 episodes on 11 discs or $199.95 for 50 episodes on 22 discs), reinforced what I had concluded as a child watching her variety show: Carol Burnett is an enormously talented comedienne (and actress) whose ultimately uneven TV program featured some hilarious and also tragic comedy.

Some of the sketches and songs and dances are too silly or too painful to watch. I recall the Mama and Eunice skits as too dark and depressing (a syndicated spinoff lightened things up), built upon a disturbingly abusive relationship. Some of the show is simply striking for its place in history, featuring a one-woman artist and Broadway star with an uncanny ability for comic timing who controlled her own show when that wasn’t done. Some of it, such as her highlight, the Gone With the Wind spoof known as “Went With the Wind” which cleverly reframes white co-star Vicki Lawrence as Cissy as against Butterfly McQueen’s slave girl Prissy, is excellent.

I can’t honestly recommend this expenditure except for diehards, TV and comedy historians and archivists and others with reason to watch and rewatch. I’ve personally grown more interested in Ms. Burnett, an incisive performer who has endured the loss of a child, with time and I think she will be more fondly remembered than this 11-season show, which was born of an obscure contract provision which Carol Burnett was smart enough to exercise. My exposure to three mid-1970s’ episodes and a few extras did not impress – absurdist comedian Steve Martin’s schtick does not age well and congenial Ms. Lawrence’s vocal skills are lacking – but I wonder if the rest of the series, with lost gems such as appearances by the great Sammy Davis, Jr., is better. A bonus bit I previewed with Vicki Lawrence, Tim Conway, Lyle Waggoner and Carol Burnett sitting in directors’ chairs chatting about the show – including, strangely, how difficult it was to work with their late co-star Harvey Korman – rambles, gets facts wrong and lacks chemistry. All the major bits appear – the popular Mrs. Wiggins skits grew tired – according to press notes, and musical numbers such as a tribute to silent films featuring Roddy McDowall are well done.

Not unlike her sad character Eunice, I can’t help but think that Carol Burnett, a dynamic singer and presence who powered the show’s most indelible acts, from sad cleaning woman to TV’s funniest lady in any variety of roles, was born to be a bigger star than the times allowed. From Once Upon a Mattress on stage to Annie‘s Miss Hannigan on film and stealing the animated show in Horton Hears a Who, Carol Burnett has performed, lived and done it all. In retrospect, her skills seem larger than her own show.