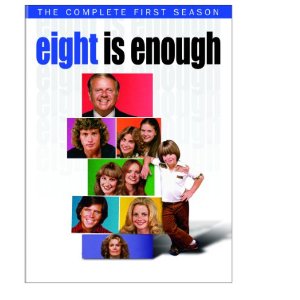 ABC’s Eight is Enough (1977-1981), based on columnist Thomas W. Braden’s (from CNN’s original Crossfire) book Eight is Enough, premiered on March 15, 1977 and went up against Good Times and, later, The Jeffersons. It ran for five seasons. The first season, co-starring Mark Hamill (Luke Skywalker in Star Wars) in the pilot as first-born son David to parents Tom and Joan Bradford (Dick Van Patten and Diana Hyland), just came out on DVD. Hamill was replaced by Grant Goodeve as David in subsequent episodes and Goodeve, who later played Steven Carrington’s partner Chris Deegan on ABC’s Dynasty, sings the series’ infectious theme song featured in seasons three through five.

25 years after its debut, Lorimar Productions’ one-hour Eight is Enough still sounds more ridiculous than it is. The notion that a newspaper columnist could afford to support eight children (ages 8 through 23) on a journalist’s salary – more preposterous today than it was in 1977 – is one thing, but there’s also the fact that few of these eight children (from oldest to youngest: David, Mary, Joannie, Susan, Nancy, Elizabeth, Tommy and Nicholas) look alike. The DVD contains an error, repeating end credits from the same episode – in which Tommy Bradford (Willie Aames) gets a crush on a character played by Charlene Tilton (who played Lucy Ewing in Lorimar’s Dallas for CBS the following season) – after several episodes.

That the lead actress, Diana Hyland, appeared as the family’s matriarch in just four episodes before getting sick with breast cancer (she died days after the first episode aired) is still terribly sad; her character, mother Joan, is one of the best things about this first season. She comforts her children, if not always her husband, supports radical new steps the children take and breaks out of being a housewife to get a job – as a photographer – when that was not an easy thing for a married mother to do. Her character has died by the start of the second season (fall 1977) and her widower, Tom, later marries Tommy’s tutor, a woman named Sandra Sue Abbott (Betty Buckley), who inexplicably goes by the nickname “Abby”. But that and more comes later. The first season is where it begins.

The series takes place in Sacramento, mostly in the Bradfords’ large, bland white house with fake shutters and what looks like a Chrysler/Plymouth station wagon (and sometimes a banana-seated bicycle) in the driveway, which empties onto a dirt road in California’s capital city. The best episode, “Hit and Run,” involves Tommy having to ‘fess up to breaking a window at the local Catholic Church, while Joannie falls for a real estate developer and gets in over her head, and Elizabeth games the system for prom dates as Tom Bradford is dogmatic against a property development. The plot lines combine in a well-written story of facing facts and coming clean about one’s mistakes. Janis Paige co-stars as Tom’s Auntie Mame-like sister Vivian – “V is for Vivian” – in another of the premiere season’s best. Neither as light nor as breezy as later seasons, Eight is Enough holds up well enough to “fill our lives with love.”