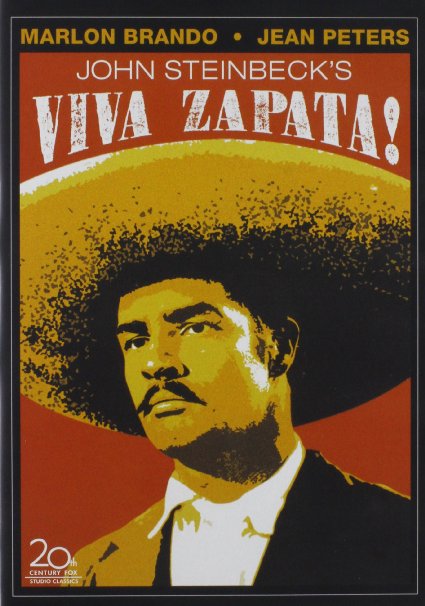 Elia Kazan’s Viva Zapata! (1952) starring Marlon Brando and Anthony Quinn, is another of his brilliantly conceived and executed character studies, a penetrating movie with an excellent script by John Steinbeck (The Grapes of Wrath). I had the pleasure of seeing it for the first time in the venue for which it was created—the movie theater—at the 2015 TCM Classic Film Festival. The picture was introduced by the late Mr. Quinn’s widow, Katherine. More on this later.

This thoughtful picture begins in a dictatorship, when a small group of Mexican peasants comes pleading to el presidente in an annual publicity stunt. Every man is humbled before the officiously puffed-up thug. Except one man (Brando) who coolly refuses to go along with the herd. He speaks up. When he does, the others step aside.

But he is heard—what he says, which is about property rights and liberty, is less important than the fact that he dares to say it—and his act of defiance is noted. The head of state takes notice of his name. He is marked for persecution by the state. His name is Zapata. As Kazan does in so many of his post-Congressional testimony films, such as On the Waterfront (1954, also with Brando as the one against the many), America, America (1963) and the underappreciated Man on a Tightrope (1953), he depicts a lone man who takes on the world.

Viva Zapata! is centrally about what happens to him when he does. But, in a deeper sense, and Elia Kazan is an ingenious filmmaker in social commentary, this seminal film is about what happens to the world when a man acts against the predominant ideals on principle. And, though it is set and contained in the southern part of North America, this is really and purely a movie about the United States of America, though it is universal, too.

Initially, the swaggering Mexican freethinker, who attracts a woman of means (Jean Peters, excellent in the role), declines to be “the conscience of the world”. He simply fights, he says, accompanied by his trusted brother (Anthony Quinn in a breakthrough performance), for justice. The government is robbing and stealing land from individuals—with Steinbeck, the collective is emphasized over the individual—and anyone can see that this is wrong, he reasons. Brando’s Zapata wants to be worldly, civilized and part of society; he is not a misanthrope or some tortured cynic or anarchist. He actively courts Peters’ feisty maiden, though he does it on his terms. When he sees an act of reprehensible injustice, he is moved to act and he does.

When he does, something happens: the many follow the one—the one who thinks for himself—though, in a powerful scene, they do so not as a mob. They follow one by one; young, old, man, woman, child. The people, too, want to be free.

Emiliano Zapata’s rise to Mexico’s presidency is less involving than its meaning and consequent impact. In black and white, with a distinctive cinematographic approach that matches the history of the period, his illiteracy and, more crucially, his desire to grow and learn, are dramatized in plain pictures, dialogue and action. His tradeoffs, betrayals and alliances shift and converge with subtle character traits and men’s choices shaping the plot. His slovenly brother (Quinn), his comrades, his woman (Peters) and, tellingly, his partner, Madero (Harold Gordon), who blankly insists that everything is “going to be alright” the way today’s ignorant and evasive intellectuals do, represent each type of person. Kazan draws each into the slowly swirling storm of revolution, making Viva Zapata! utterly absorbing.

The title means something, too. This is a man who is strong not merely in body. He is muscled and fit and arrogant in everything he does, that’s true. But it is earned and he is searching, always striving to be his best. His rational mind is his best asset and the movie is seeded with this theme—that the man of the mind is man at his best—in particular with a reference to the difference between the jug and the vase, so watch what happens to both. “Liberty is not [just] a word,” he says at the height of his power, if not his influence. He means it.

The world’s changes happen slowly, over time, and he senses this, too. When Zapata faces his own fallibility, at the risk of death, the revolutionary must make an agonizing choice between blood and tradition and his highest ideals. The choice Zapata makes is the choice each man faces, especially now, with every freethinker endangered by men of faith and force. With depth and reason, the timeless example of what makes a man strong—as against what makes people seek to be led by a strong man—is depicted in indelible scenes on a white horse, which symbolizes lost innocence and a beloved hero. “How do you kill an idea?” Someone asks, echoing Victor Hugo.

Viva Zapata! by Elia Kazan dramatizes an answer that calls upon man’s greatest revolutions—American, Industrial—and dares to ask for more…

In the most fascinating interview at the Classic Film Festival, Mrs. Anthony Quinn, Katherine Quinn, who founded the arts educational Anthony Quinn Foundation, spoke about her late husband, who won Oscars, including one for his role in Viva Zapata!, and studied architecture with Frank Lloyd Wright. Though the exchange was too short, Mrs. Quinn recalled that he hated talking about the craft of acting because he was a man of action who held his approach to his work as an internal, private affair. She also said that, while he liked working with Kazan, and with director David Lean (who directed Quinn in Lawrence of Arabia), he didn’t care for modern directors, whom he regarded as “traffic cops” because they didn’t really direct the actor. My favorite part of the discussion was Katherine Quinn’s response when it was pointed out that Anthony Quinn was “the first Mexican-American…” etc. to win an Oscar. She courteously cut in and explained that her husband rejected the importance of that non-essential fact; he simply, she said, wanted to be his best as an actor. He was and, in Viva Zapata!, it shows.