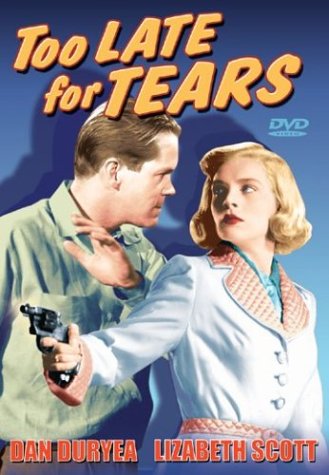 This film noir classic with a femme fatale played by Lizabeth Scott (who apparently hated the movie) is a shocking portrayal of a diabolical woman literally on the manhunt.

The late Miss Scott, whom I recently discussed with Leonard Maltin and Robert Osborne, was an actress with range and talent, not just looks, and this is one of the roles for which she is most widely known. The Los Angeles-based Too Late for Tears (1949) was screened twice at this year’s Turner Classic Movies Classic Film Festival due to popular demand. According to its restorer, it was allowed by the copyright owners to fall into the public domain, leading to bad video quality and fewer showings. The restored print is scheduled to premiere on Turner Classic Movies this summer.

Here, Lizabeth Scott is a wicked wife who never loses an opportunity to cash in on the unearned. It’s a subtly layered performance in a limiting, constricting role that’s not her best. In it, she is drawn and cool as Arthur Kennedy’s wife. When a suitcase stash of stolen loot shows up, she does anything to keep it and I mean everything. With crisp LA locations from Grauman’s Chinese Theater to Union Station that fit the plot and her measured deliverance of hokey lines, the audience somehow buys the whole thing and it’s surprisingly easy to get caught in her murderous drive to keep the cash. Add an alcoholic lowlife (Dan Duryea) who stole it in the first place and the conflict cuts both ways, with this fast-thinking dame so plain about her scheme in film noir’s hard, man’s world, it’s almost tempting to root for her. Scott, who worked previously with director Byron Haskin on I Walk Alone (1948) with Burt Lancaster and Kirk Douglas, delivers a line about having been poor that provides the picture with plausibility.

Duryea’s lout starts calling her ‘Tiger’ at some early point in the plot, setting up one of the movie’s best lines, and everything comes to a climactic showdown with Don DeFore, who’s paired with Kristine Miller as the good people in pursuit of the truth and justice. Too Late for Tears is a tad too much in spite of Lizabeth Scott’s turn and it feels like some of her best scenes may have been cut out. Nevertheless, she makes the most of a brutal role, originally assigned to Joan Crawford with Wendell Corey in Duryea’s role and Kirk Douglas in the Kennedy role, according to the Film Noir Foundation’s Eddie Muller, who funded a complete restoration, which he introduced at TCM Classic Film Festival‘s showing at Hollywood & Highland. Though this genre is not my favorite, it is extremely influential. This film shows why.

Too Late for Tears, written by Roy Huggins, mentor to the late Stephen J. Cannell, co-creator of The Rockford Files with James Garner and The A-Team, premieres on TCM on July 17, 2015. Click on the image to buy the DVD.