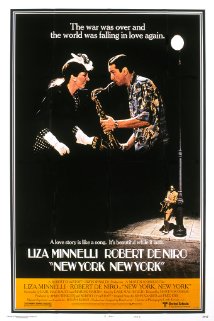 New York, New York is director Martin Scorsese’s flawed and haunting story in musically-pegged pictures centering upon two artists. Robert De Niro (Little Fockers, Hugo, Last Vegas) portrays a narcissistic saxophonist who is both wild and talented and totally grating. Liza Minnelli (Cabaret, Arthur) plays a singer. They meet after World War 2 ends as newspaper headlines proclaim victory over the “Japs” and New York City erupts in celebration, tossing swastika-emblazoned flags around in mockery of the vanquished Nazis. This is prelude to the film’s sense of foreboding that postwar elation masks deeper wounds from a world at war.

The 1977 movie, released at the height of Minnelli’s and De Niro’s careers as Scorsese (Alice Doesn’t Live Here Anymore, Raging Bull, The Departed) was rising, is like an overlong, epic poem to the artistic spirit of youth. Minnelli had survived her mother’s maudlin end of life, had a meteoric hit in Cabaret (1972) and De Niro had registered as an up and coming ethnic actor among the new, vulgar Hollywood types—Hoffman, Nicholson, Pacino—in Scorsese’s Taxi Driver (1976) and New York, New York was supposed to be huge.

It’s both easy to see why it bombed and why it might have been a hit.

The United Artists movie is grand, with a score by Cabaret and Chicago composers Kander and Ebb, cinematography by Laszlo Kovacs (Five Easy Pieces, Paper Moon, Mask) and the producer of Oscar’s Best Picture for 1976, Rocky. But it is manic, disjointed and too broad like most Scorsese pictures and the De Niro character, Jimmy Doyle, in particular, is excessive. Jimmy is the prototypical musician, a stand-in for every artist, especially the male artist. He is charming, good-looking, talented and all kinds of bad news waiting to happen. But in an instant from a stair step, Jimmy the hustler sees a beautiful couple dancing under the elevated train and catches a glimpse of the romantic and musical in life. He spots the couple in movement and light and it’s like a work of art in motion. Such a sight could heal whatever wounds he bears. In any case, he wants the life he imagines he sees.

In Francine Evans (Minnelli), he goes after it. She’s initially impervious to his dimpled, gleaming charm, so it’s clear that wide-eyed Francine is different than the other girls he sets for conquest. All Jimmy wants in life, and he tells it to Francine, is music, money and sex, pretty much in that order. Francine concurs, finally, after meeting cute in a nightclub played by an orchestra, then in a taxi cab and, spontaneously, again at an audition where the hothead sax player is prone to pop off. What propels New York, New York is its sharp capture of the dance, tension and conflict of two people—two artistic people—in love. For over two hours, it is enveloping, aching and bittersweet.

Naming the romance falls neatly to Francine, who observes that “one of the nicest things in the world is waking up knowing someone loves you.” Minnelli shines in the role. It’s really her movie.

All of this happens (when the shows aren’t on the road) in New York, amid musical bandstands and set pieces, moods and magnificence in jazz, from Harlem to the recording scene. Everyone is surrounded by paintings, songs and instruments, immersed in the hard work of making art, with writers, musicians and other attendants that make up show business. New York, New York depicts the musician’s madcap life in snowbound marriage proposals, greedy kisses in the rain and the ever competitive drive to perform and connect with bandmates, audience and material. It’s all there, tethered to whether Jimmy and Francine, like the couple in La La Land, can love each other and make a living in their art.

A drunken fight ensues and, in the De Niro character’s denouement, the reality strikes a major chord. For Minnelli’s Francine, she sees herself in her eyes for the first time to the strings of jazz guitar. The grand finale plays to Minnelli’s best Kander and Ebb songs including the megahit “New York, New York”, written for this thoughtful, stylish movie, proving what her stage and television audiences already knew about this powerhouse entertainer who refuses to fall down. In Mr. Scorsese’s story-within-a-story-within-a-storybook ending, with Liza playing a moviehouse usherette, the artist integrates with the art, this time in reality. So, while New York, New York presents a false dichotomy between the romantic and the realistic, and it is tedious in stretches, it deals in grand notions and ideals in music and pictures. Much of the movie is striking and seeing Liza Minnelli put on the show toward the end still packs a wallop as big, grand and fabulous as New York City.

Martin Scorsese’s movie about making money while making music and making love is mixed with real power and insight.