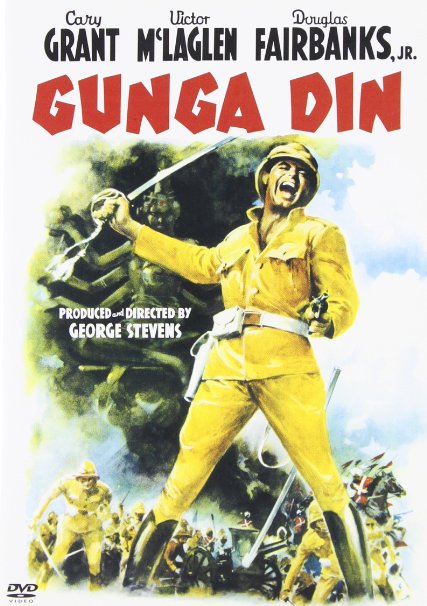 One of the greatest war movies and another reason besides Gone with the Wind and The Wizard of Oz why 1939 is a legendary year in motion pictures, Gunga Din, played at Sid Grauman’s Egyptian Theater for TCM’s Classic Film Festival. It was introduced by Oscar winners Ben Burtt (Lincoln, Star Trek, Super 8) and Craig Barron (Hugo, The Curious Case of Benjamin Button, Captain America, Terminator: Salvation) in cooperation with the Academy of Motion Picture Arts and Sciences.

Though TCM tagged Gunga Din incorrectly as an adventure film, this unusually moving and humorous adaptation of Rudyard Kipling’s epic poem of the same name is a character-driven story of friendship which ultimately, like American Sniper, depicts man at war, dramatizing what makes a man’s character. Originally assigned to director Howard Hawks (Red River, Rio Bravo, The Thing), it is directed by the great George Stevens (Shane, Giant, A Place in the Sun). Written for the screen by Ben Hecht and Charles MacArthur, the action pits three smart aleck British soldiers (Cary Grant, Douglas Fairbanks Jr. and Victor McLaglen), accompanied by a loyal Indian waterboy (Sam Jaffe), to fight barbaric religious fundamentalists in northern India.

The result is both light and gripping. The RKO studio’s special effects department, as Burtt and Barron pointed out while wearing pith helmets and providing drone-based footage of the Lone Pine, California location where Gunga Din was filmed, were ingeniously exploited to replicate the Khyber Pass. Shot near the Golden State’s Mount Whitney and Lake Sherwood in Ventura County during a 10-week schedule, the plot’s hard core is serviced by crackling, witty lines delivered by the picture’s masculine leading men.

Gunga Din forewarns with its opening shot of a vulture and before long the colonial soldiers are venturing into a village where they are besieged by vicious natives. Amid the wisecracking, Cary Grant’s character kills with his bare hands and, for this picture’s jaunty reputation, its subtext of life and death is always on display. This is what drives Douglas Fairbanks, Jr. who still elicits swoons in a packed movie palace audience, to heed his fiancee’s (Joan Fontaine) pleas to exit military service and get on with his life. His character’s imminent departure just as one of the British army trio falls into the belly of the beast with a diabolical Indian guru raises the stakes of the plot from the tension of shifting camaraderie in banter to the very essence of heroism in action.

As one of the men puts it in one of many great lines, referencing by implication that each soldier labors, marches and fights only in order to live for his own pursuits, “I’m a man first.” This is a short but winning sentence; a harsh, firm and swift rejection of the halfway, the approximate, the not-quite, which is everywhere in today’s approach to war (dramatized in American Sniper). That blistering line, which I’m glad to say drew applause, propels the powerful, and most meaningful, portions of Gunga Din.

The nature of the enemy is, in one of their own’s words, that of an “ugly little savage” complete with beheadings and the idea that they kill for the sake of the kill. As the waterboy acts to gain and keep a more noble status, as in Kipling’s poem, with the Western invaders in peril, Cary Grant as he is rarely seen states the film’s raw and truthful theme: “Here we are and this is it.” I haven’t experienced such rapt war movie silence in a movie theater—and the Egyptian was filled to its 600-plus capacity—since I saw grown men reduced to sniffles in American Sniper.

When distant bagpipes sound as the mystics of muscle slither, pull up and cower to ensnare the Brits, in skillful moviemaking which ranks with Zulu, Battle of the Bulge and other great war scenes, something extraordinary, genuinely extraordinary, happens which forever sears into the heart and melds into the beat of the drum corps, like a heartbeat so strong that it seems to keep on beating after it stops. Referencing Hannibal, Caesar, Napoleon and Alexander the Great, Gunga Din combines every line of writing, direction of drama and special effect into a moment of glory. Final scenes, like the soldier’s last breaths, with tears depicting man at his best, for a change, wrest from one’s enjoyment of humor the wisdom which lies within an act of bravery. Gunga Din is an awesome, honest and breathtaking portrayal of one great man’s glory at war.

Click on the image to buy Gunga Din on DVD.