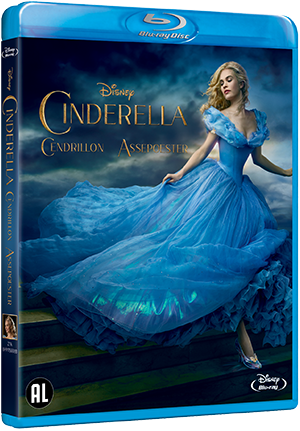 The DVD features a short feature on the movie’s animals, such as horses, chickens and mice, and the animated short that preceded Cinderella during its theatrical release, Frozen Fever. The Blu-ray includes these and also the 20-minute A Fairy Tale Comes to Life with brief interviews with major cast members and director Kenneth Branagh, writer Chris Weitz and producers David Baron, Simon Kinberg and Allison Shearmur in addition to other designers and production crew. The feature is alright, though it does not sweep over the whole picture as it should. I do not think Disney appreciates this picture for its full value.

Mr. Branagh himself downplays the film, which caused some controversy among feminists when it was released, as a light and enjoyable indulgence. There is no mention here, too, of the wonderfully romantic score by Patrick Doyle (read my review of the soundtrack here) among the features. A costume bit involves classical music from The Nutcracker which isn’t used in the 105-minute Cinderella.

The best Blu-ray extra—the best of the whole package besides the movie—is the 11-minute Staging the Ball, which breaks down one of the most breathtaking scenes in Cinderella. The two leading actors, Lily James as Cinderella and Richard Madden as the Prince, comport themselves to the palace filmmaking and so does everyone else who comments on the ballroom scenes, with adoring angles, gestures and framing. Relishing details, Kenneth Branagh and company explain every aspect from lighting the candles and building the set on the James Bond lot to the gown’s 10,000 Swarovski crystals and dance rehearsals. James describes the aura as “lightness and elegance” and it is beautifully deconstructed here. An alternate opening, which forges a stronger bond between the farm animals and the girl’s family before the stepmother (Cate Blanchett) moves in, is very good. Disney restricts the rest of Mr. Branagh’s five deleted scenes to its Disney Movies Anywhere exclusive, the code for which is included on the box.

This is a movie to get lost—even become immersed—in, as Walt Disney might say, and those inclined should do so without reservation. Boys and girls alike should see it with the whole family. Cinderella is that good and that rare and unusual among today’s pictures. Its grand, romantic style is suited to its warm, intelligent script. Despite the denial and modesty with which it is presented, Cinderella is lovely, moving and magnificent all at once and its transfer to Blu-ray delights in high-definition.