A new documentary by director Joe Berlinger is the best orientation I’ve seen or read of the November 1959 mass murder depicted in In Cold Blood (1966) by Truman Capote. Cold Blooded: The Clutter Family Murders, which aired in two parts last week on SundanceTV, comes in four, 42-minute parts on iTunes. The thoughtful series is compelling and, surprisingly, life-affirming. 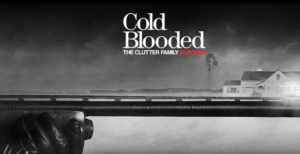 Tracing in a clear, concise but mercifully well-paced, conversational and cohesive narrative, Cold Blooded lays out the chronology, motives and steps of the two criminals who broke into the Holcomb, Kansas, home of Herb and Bonnie Clutter. The criminals were looking for a safe that one of the killers had heard or fantasized about while listening to tales about the renowned, skilled farmer Herb Clutter in prison, though rape may also have been a major motive. What followed the break-in, if you don’t already know, is thoroughly examined.

However, if you do know how 15 year-old Kenyon Clutter, 16 year-old Nancy Clutter and their parents were executed, and the murderers investigated, caught, tried, convicted and sentenced to death, this notorious slaughter gets a fuller, more nuanced and rational treatment and you’ll probably gain a lot of new knowledge. Cold Blooded is not one of those brash, vulgar, deep-voiced or sensory-overloading cable television shows that tease and sensationalize death for shock’s sake. Cold Blooded covers the case made infamous in Capote’s absorbing In Cold Blood and the subsequent 1967 movie adaptation (which I’ve reviewed and found lacking), but this series revolves around the exclusive, spellbinding and largely untold tale of the Clutter family.

And that makes all the difference.

Cold Blooded excels as objective reporting because veteran documentarian Berlinger — a real documentary filmmaker using documents, not primarily an activist with an agenda confining itself to perceptual material such as pictures — weaves facts, logic and history into a televised tapestry. His expertly conceived work touches on, accounts for and contemplates each and almost every aspect of this mid-20th century crime, which launched Capote’s career in earnest even as it destroyed the talented writer, catapulted the true crime genre and forever melded fact and fiction for better or worse (those of us inclined to opt for ‘worse’ will not be disappointed, yet Cold Blooded manages this without denigrating Capote).

Among Cold Blooded‘s exclusives: audio and video segments with the two surviving Clutter kids who’d moved out of the house before the murders and consented to these interviews on the condition that their privacy be paramount; other relatives, friends and the son of investigator Alvin Dewey. Crisp, not gimmicky, photography, brisk, not fast, pacing and carefully labeled archival footage add to the sense of realism through reflection and selective recreation of the crime. Berlinger found and uses See It Now (1952) clips with Mr. and Mrs. Clutter from an episode of the CBS News program.

Key facts are reported in scrupulous detail, from killers Perry Smith’s and Dick Hickock’s brutal and abusive backgrounds, which both include devastating physical harm including the beating of a boy’s penis by a nun and a major head injury. From Mexico, Iowa, Las Vegas, Barstow, California and Sarasota, Florida to precise retracings and reports in Olathe, Kansas City, Garden City and other Kansas towns and cities, including Holcomb, of course, Cold Blooded generally addresses crime and punishment essentials, though some aspects are underexplored.

The killers are not overexamined, which is typically the case with the Clutter murders, and the same goes for Capote, a flamboyant and intelligent writer who became an alcoholic and died at age 59 in 1984. Capote’s research in Kansas with To Kill a Mockingbird author Harper Lee is covered, too, as well as the 1967 movie directed by Richard Brooks starring Robert Blake, who, like O.J. Simpson, was later accused of murdering his wife and found by a jury responsible for her wrongful death.

Berlinger’s ability is on full display. He perfectly paces the segments. Interviews with persons associated with the case, whether they’ve known the criminals, prison, defense, prosecution, police or intellectuals, are sensitive, revealing and insightful. Titles are clearly marked with names and dates which last longer than a half-second. Several interviews are striking, poignant and inspiring. One Clutter relative kept a journal. Reading from it, the relative shares remarkable and poetic elegies. Others possess that distinctly American Midwestern sense of justice. A cemetery caretaker offers simple and profound thoughts. Capote is neither deified nor caricatured, as is often the case.

Nancy Clutter’s boyfriend, who was a suspect, tells in a wounded voice his tale of intense, lifelong alienation and deep, abiding loneliness. But he returns later in the series to offer an unyielding and highly moral, even sacred, memorial tribute which rightly honors the dead and puts this horrible crime in a proper perspective. Berlinger lets the audience exercise their own judgment. This makes Cold Blooded an aching and overdue story about the good, decent and innocent victims of a then-newly emergent, partly thanks to Capote, type of American crime which never came to an end: the roving, random mass murder, from the hippie Manson killing of the productive for being productive in 1969 to last month’s unsolved slaughter of the happy for being happy in Las Vegas. In this purposeful recounting and powerful remembrance, facts, evaluations and evidence provoke the audience to contemplate this historic, evil crime and think about what’s gone wrong and why.

Putting the exterminated Clutter family in fuller view, Cold Blooded doesn’t let the viewer turn from injustice — which is the least the innocent and the living deserve.