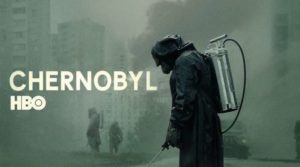 As gray, bleak and lifeless as a honest series about socialism and its more consistent altruist-collectivist application, Communism, in practice must be, the five-part miniseries for AT&T-owned Home Box Office (HBO) stands out for depicting bureaucracy as a deathtrap. Chernobyl taps the Soviet and Russian sense of life, which is essentially anti-life.

But it does so strictly and only in minuscule measure. Upon a young technology co-worker’s recommendation, I bought and watched this series. I find Chernobyl’s excellent acting, visual and production values completely immersive and engrossing. You probably will, too. It’s striking for both its implicit and explicit honesty about socialism. This is so true that it is tempting to evaluate HBO’s series as a breakthrough.

Chernobyl is not quite that good. Socialism is spreading in the United States as a dishonest socialist presidential candidate exploits America’s workers’ fears into believing that a wealthy, old New Englander can loot the wealthy and spread the loot to give everyone clean air, good medicine and a college education. So, it’s refreshing to watch and reassuring to know that a major miniseries counters the fraudulent pseudo-curmedgeon with a dramatization of the truth that socialism, like radiation poisoning, destroys the individual and, left untended, kills everyone.

If you know about the spring 1986 nuclear disaster in Communist Russia — the only major nuclear meltdown in history — then you’ll enjoy Chernobyl more. If you don’t, as my young colleague did not, you may be inclined to think that the truth-based Chernobyl’s a work of pure fiction. This is especially so if you’ve come of age post-Earth Day. If so, you’re part of generations that’ve been subjected to nearly 50 years of relentless environmentalist propaganda falsely blaming the wealthy, business, capitalism, America and industry for mass death, disease, pollution and natural disaster.

With key roles in strong performances, Chernobyl shows otherwise. The scientists whose knowledge under the Union of Soviet Socialist Republics is powerless, to invert the meaning of Francis Bacon’s famous quote, try in vain to contain, alleviate and convey the damage after a nuclear plant explosion caused by incompetence, bureaucracy and faith in the welfare state. Emily Watson (War Horse, Angela’s Ashes, Anna Karenina) and Jared Harris (The Curious Case of Benjamin Button, The Notorious Bettie Page, General Ulysses Grant in Steven Spielberg’s Lincoln) excel in these roles. There’s also a fireman and his wife, various Communist Party thugs, from idiotic plant chiefs to security goons, and Skarsgård as a top Communist Party thug.

As is evident everyday in Hong Kong, North Korea, Venezuela, Cuba and China, any one who’s a member of the Communist Party is what amounts to a thug, so I’m going with that term because it is true. And part of the problem with Chernobyl, as shocking as this may sound to fans and admirers of Chernobyl, is that Chernobyl doesn’t fully account for this fact.

In ways large and small, the series shows what it means to be a Communist or socialist, often with precise and profound attention to detail. The nuclear power plant known as Chernobyl was, in fact, the Vladimir I. (for Ilyitch) Lenin nuclear power plant. As if to remind the audience that the horror movie-like story of Chernobyl begins with the monster who promoted self-sacrifice and socialism, Lenin’s portrait, depicting the evil philosopher whose ideas made possible the bloodiest dictatorship on earth, looms over every episode of Chernobyl.

But those who mindlessly carry out his mission of monstrosity don’t get called out. Certainly, they get implicated, and this includes, again, refreshingly, the chief Communist of the Eighties, the dreadfully overpraised New Left hero, Soviet premier Mikhail Gorbachev, who appears in Chernobyl in key scenes marking the dictatorship’s errant, slow, delayed, deliberate and utterly horrifying response to the nuclear meltdown. Gorbachev, darling of the left, the press and everyone in the West, including to some degree unfortunately Thatcher, during and after the collapse of Soviet Communism, was a Communist. To his credit, he noticed that Communism was collapsing under his dictatorship. But Gorbachev was a Communist dictator. Like a janitor who’s the only one left in the building to mop up the mess of a Department of Water and Power system failure, Gorbachev merely managed the end of a dictatorship. Chernobyl shows this, demonstrating that Gorbachev was merely more calculating and publicity-savvy. That this Communist dictator knew he’d be better regarded by avoiding total loss of life, stature and decency is rightly regarded as secondary.

Chernobyl does not put Gorbachev or any of the Soviet Communists in their place, however. For its taut drama, suspense and spot-on portrayal of the insidious philosophical and existential poisoning of an entire country, Chernobyl not only doesn’t get around to rendering moral judgment of the union of concerned scientists and Soviet socialists — it barely scratches the surface of Soviet mass murder, coming closest in a scene with a woman milking a cow — Chernobyl makes the dictatorship’s moral premise, altruism — the idea that the individual exists to serve Others — a source of heroism.

In dramatizing Soviet divers, miners and Lenin plant workers, and those who love them, to the extent it is possible to love someone while living under a dictatorship, Chernobyl holds sacrifice as the moral ideal, leaving the Chernobyl disaster’s — and Soviet Russia’s— cause perfectly in place. Not a single scene implicates altruism or self-sacrifice as the toxin that poisons the plant and the country. Chernobyl unfolds with adherence to the cold, miserable and vacant representational recreation of Soviet Ukraine and, especially, Moscow. Its soldiers, KGB agents, committee members, lines, housing projects, cars, streets and red star-emblazoned machines reek of an entire population of humans steeped in ignorance, despair and total misery. Mazin’s series demonstrates for the thinking viewer what, how and why socialism makes everyone rotten, corrupt and depraved. This is especially true in an unnerving subplot with Barry Keoghan (Dunkirk, Life’s a Breeze, The Killing of a Sacred Deer) as an innocent soldier who, with two comrades, is assigned to terminate post-disaster contaminated animals and pets in evacuated zones.

Chernobyl can’t come close to fully dramatizing the horror of Soviet Russia. The mass death, including the long, drawn-out, slow, waiting-in-line-to die-slowly-by-radiation-poisoning, which is the perfect metaphor for Soviet Russia, of this socialist state is impossible to fully capture. Tens of millions were slaughtered. The makers of Chernobyl seem to grasp this on some level, with end titles that admit that no one knows how many died from the 1986 nuclear disaster.

Whatever its flaws, this series, which is best seen as an intellectual, fact-based horror miniseries, not as a deeply contemplative TV program, merits serious attention. In an era in which voters in the greatest nation on earth may be on the verge of electing a socialist president who chose not just to visit but to honeymoon and sanction Communist Russia after the Vladimir Lenin nuclear meltdown, Chernobyl rumbles and hums with fact-based foreboding of the horrifying past as chilling prologue.