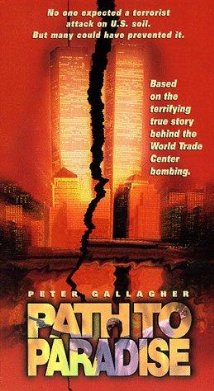 A story of its time, with indictments of individual liberty and with apologies for Islam, the made-for-cable Path to Paradise: The Untold Story of the World Trade Center Bombing is an otherwise capable account of what led to the February 26, 1993, Islamic terrorist attack on the Twin Towers before Moslem jihadists brought them down and mass murdered nearly 3,000 people eight years later.

What’s essential to know about this picture, which premiered on premium cable channel Home Box Office (HBO) on June 14, 1997, is that it aired after the first major Islamic terrorist attack on the U.S. mainland though before the worst act of war in U.S. history. Both assaults were initiated by the same idea-driven fundamentalists and against the same primary target that would be forced by faith-based monsters to collapse on September 11, 2001. This provides a unique context in which to examine HBO’s telefilm as a fact-based TV drama with enough time and distance from both strikes on the two towers.

As with almost every film about Islamic terrorist attacks ever made, Path to Paradise is bad on framing the enemy’s philosophy and better on recreating dramatic tension. Historians can see and judge for themselves, and there is a significant library of movies to study, that movies about acts of war by jihadists diminish the role of jihad – the Islamic faith’s tenet that life is an unending political struggle and one must wage war on the infidel – in direct proportion to the proliferation of the siege. For example, the earliest pictures about attacks on Americans on planes, ships and diplomatic missions explicitly name and identify, and often explore, Islam as the root of radical Moslem motive to strike down the infidel (anyone associated with the West). As recently as 1996, with Stuart Baird’s excellent Executive Decision starring Kurt Russell and Halle Berry, deeply religious Moslems are rightly depicted and named as seeking to destroy the West with catastrophic acts of war.

Path to Paradise, which co-stars Marcia Gay Harden, is, as its title suggests, focused on what motivates Islamic terrorists to commit mass murder, which they did on that winter morning in lower Manhattan, blowing up a rented van, injuring 1,000 and killing six people. Here, Peter Gallagher (the film’s best asset and in one of the actor’s strongest performances) portrays FBI Special Agent John Anticlev recounting in retrospect how he and NYPD Detective Lou Napoli (Paul Guilfoyle), who were part of a joint task force on counterterrorism in the New York area, tried to catch and stop the Moslem radicals before they struck. After an assassin (Shaun Toub), who follows the commands of a blind jihadist sheik (Andreas Katsulas), murders a rabbi, it’s the good New York cops versus the bad and incompetent cops, who refuse to judge Islamic terrorist videos and writings – one translator dismisses the hateful, anti-American ideas as “Islamic poetry” – and the terrorists only fail to bring down the twin skyscrapers through their own errors. Aided by an Islamic bomber (Art Malik) who sails through U.S. immigration despite being in violation of the law, the terrorists come, go and attack as they please.

This leads the Gallagher character to conclude that freedom of religion is the problem, a barrier to stopping crime and acts of war. But Path to Paradise repeatedly demonstrates and dramatizes to the contrary in spite of itself, showing that a nation up to here in Big Government with layers and layers of controls and bureaucracies is at the mercy of those who follow rules. In an early pre-Mom role, actress Allison Janney appears as a policewoman who properly ridicules the incompetence of the federal government in fighting Islamic terrorism. So much of what’s depicted here, and this telefilm aired years after the 1993 attack, prefigures the government’s total dereliction of providing a national defense.

After the rabbi was gunned down by a jihadist, for instance, a government spokesman rushed to judgment and declared that there was “no indication at all” of a jihadist conspiracy, just like today’s government spokesmen do about Moslem attacks on the U.S. at Fort Hood, Boston and Benghazi. The police statement was made when evidence indicated that the opposite was true.

It’s tragic, too, that Marcia Gay Harden’s FBI agent deadpans to the informant that “the FBI doesn’t get to Libya much,” when he comes clean about the blind sheik’s jihadist plots in Africa (the Obama administration supposedly sent the FBI to Libya to investigate the 9/11/2012 attack on Americans at Benghazi). The reality that the plot to destroy the West and take over the world for barbarism is winning is undeniable as the informant talks about plans to remove Egyptian dictator and U.S. ally Hosni Mubarak. Like so much of what’s depicted in Path to Paradise, that happened months and years ago.

Nothing is so obvious, of course, as one watches this movie, as the fact that the Twin Towers would soon be downed and Islamic law would spread across the globe, gather power and topple country after country from Algeria to Iraq (now emerging as a new caliphate) as forecast by the lone voices against jihad who are deemed too harsh, extreme and pro-Western. Structured like a police procedural, the 90-minute Path to Paradise doesn’t get into the more detailed plot points, including what biological agent may have been prepared for or laced in the 1993 World Trade Center bomb, but it is an excellent example of what powers up the jihad and allows it to spread, fester and annihilate. In fact, unintentionally, the picture’s end credits punctuate the point that appeasement of jihad – the West’s refusal to name, identify and destroy state sponsors of Islamic terrorism – is ending America from within: a disclaimer as the towers still stand while the credits roll reads: “While based upon actual events, this film portrays the actions of a small group of individuals. It does not reflect the beliefs of the majority of Muslims and Arabs.”

How do the 1997 filmmakers know what they claim to know about the beliefs of most Arabs and Moslems? Blank out. Public opinion polls are not cited as evidence, not that polls are permitted in religious dictatorships that dominated the Arab world, then and more so now.

With the Arab world from Africa to Asia disappearing into a barbaric caliphate rising against the West, the assertion that most Moslems are peaceful cannot be accepted without question. The towers are destroyed. The Pentagon has been attacked. The rights of the individual are under siege from an omnipotent American state rising in proportion to the rise of jihad and not a single counterrevolution against Islamism has taken root in the Arab world.

Path to Paradise despite the drawbacks provides an account of how the looming empty spaces and spreading darkness came to be.