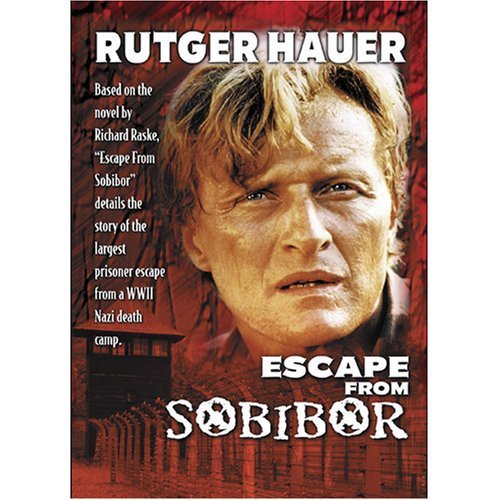 German SS and Nazis constructed the top secret death camp Sobibor in the spring of 1942 along a railway line in a remote, wooded region of Poland. The gassing of Jews arriving by boxcars began in May 1942, according to historians. The Holocaust Museum writes that “Nazi Germans ordered the Jews into the barracks and forced them to undress and run through the “tube,” which led directly into gas chambers deceptively labeled as showers. The women’s hair was shorn in a special barracks inside the “tube.” Once the gas chamber doors were sealed, in an adjacent room guards started an engine which piped carbon monoxide into the gas chambers, killing all those inside. The process was repeated with the next freight cars.”

But on October 14, 1943, Jews fought back, waging all-out attack on the slavemasters and ghouls by carrying out a bold, impossible and vicious revolt in which many escaped to freedom. Before he died, writer, teacher and historian John David Lewis recommended a British movie (read the full interview here) about the daring death camp rebellion, Escape From Sobibor, which was televised on CBS in 1987.

Nazis and their allies killed at least 167,000 people at Sobibor. Those who organized the resistance group in the late spring of 1943 meticulously planned their counterstrike, plotting to surreptitiously eradicate key SS officials and start an uprising. The 2-hour film is a gripping dramatization of their heroic story. With a teleplay by Reginald Rose, based on the book by Richard Rashke and other source material including an unpublished manuscript, and directed by Jack Gold, Escape From Sobibor is must-see viewing for Jews and all people who are persecuted, oppressed and longing to live in freedom. It is the anti-Schindler’s List. This is because the Jews portrayed here are depicted fundamentally as individuals – not as a tribe – who fight and run for their lives. In fact, the most tradition-bound and faith-based among the prisoners are depicted without casting aspersions as passive and ready to die.

The opening takes place on a bright day with flowers and sunshine and innocent people painting what might be one’s home. But soon the camera comes to a cold, gray pole that rises and rises until one sees that this is a flagpole upon which the hoisted flag bears the mark of the swastika and the innocents are slaves who are marked for duty to the Aryan race and National Socialist state. After a failed escape, men are shot. Leon (Alan Arkin) flinches at the sound of a gunshot. Certain Jews are spared the gas chambers if they work a trade in order to serve those who commit the mass murder. Some Jews known as kapos do so willingly and some are better than others. Leon, who has lost his wife and children, leads them into what for some may become the great escape.

Getting off the boxcars, families are separated. Property is abandoned, to be seized by the state. A single old Jew disembarking from the train walks up and strikes a Nazi in the face and instantly it is clear that this death camp is different; here, Jews are not all passive, compliant pacifists who take obedience on faith. Some are exceptionally spirited in spite of the black smoke and what they sense or know it means. That they shudder in the shadows of mass death is proof of life. Some grasp this fact and a band of men, women and children bond. A few speak up to lead. A resistance forms.

“The better your behavior, the easier your stay here,” they are told by the Nazi government types, who order the Jews to obey, get in line and just follow orders. But quickly the individuals are introduced as individuals: Luka, Samuel, Yitzhak, Shlomo, Tolvi, others. Later, a blond Soviet Jew named Sasha (Rutger Hauer in one of his best performances) is imprisoned here with other Russian Jews. Arkin’s Leon eventually recruits eager, steely Luka (pitch perfect Joanna Pacula) with the deep set eyes to provide cover as they scheme to create an impossible liberation. But first there is the nonstop agony, grayness and death as kapos carry a whip, killer dogs bark at night and Leon breaks it to newcomer Yitzhak that “the fire is the funeral” and the black smoke signals death. As the men talk, grope and plan, Luka looks out the window at the cluster of huddled Jews and begins to understand.

Escape From Sobibor is distinctly British, not Hollywood, and its production is made for television. This means that action is earned, as in a miniseries, and resistance grows in each individual character slowly, in time, as men and women seek to better grasp what is reality, how to know, who to trust, how to feel, where to speak freely, why they bond and when to fight back. When some Jews rightly spew anger at kapos who get favored treatment and the Nazi-favored Jews spew back, Leon, the death camp’s moral and life force, steps in to enunciate the picture’s theme. Breaking up the conflict, he asks: “why do we fight amongst ourselves? If we have energy to spend, let us spend it against those who have reduced us to this.”

This is the tale of how they do.

For their part, the Nazis are as small and sadistic, and, surprisingly realistic, as such monsters have to be, commanding Jewish prisoners by force to imprint a snake in gold and tearing at each other with petty little hatreds such as whether it is permissible to use Jews for sex before they are gassed. “How many Jews did you gas today?” One of the fat, disgusting bastards asks one of the more efficient, punctual Germans, trying to put him in his cowardly place. But there are merely rungs of hell in Sobibor and the movie inches toward the moment they are about to burn.

“The best revenge is for you to survive,” one Jew tells another, as yet another failed escape leads to a doubling in executions with a diabolical twist that sparks the story’s shocking and honest solution to the problem of being “chosen” as Jews in this context. In this dank place near the river, Jews did not wait for God, prayers, traditions or fate, luck or a good German to get them out and when a good-looking Jewish man in love says “yes I can” and his beloved steps forward not to object to his risking death but to offer a superior weapon with which to kill, Escape takes on an urgent and unyielding suspense that can only be described as utterly absorbing. “My name is Herschel Zuckerman and don’t you forget it,” one Jew says as he does what must be done. In slow, small steps and segments and unplanned events that intervene with this impossible attempt to flee totalitarianism for freedom, the chosen that choose to resist, fight and kill use ladders, axes, guns, knives and anything within reach to disembody the death camp apparatus by disabling its brains foremost. Bloodied but unbowed, cutting through wires in front of wires and braving mines that blow their comrades apart, man, woman and child thrust, kill and run for their lives in an unforgettable Holocaust drama that should be seen by everyone so they know these heroes were real and once existed in a world now dominated by zombies and pod people.

Together, kapos and Jews run into the woods, valiant unsung fighters of Sobibor who have been overshadowed by topically and thematically inferior cinematic works of pain, misery, tradition, collectivism and playing for time. Escape From Sobibor finishes with a powerful narration by the late ABC News journalist Howard K. Smith, who began with a newsman’s introduction to this dark part of history and the words “this is that story…” and ends with tales of Jews who lived their lives in Connecticut, Israel and Santa Barbara (also, the Soviet Union, which is another, much worse horror story). The telefilm, brought to my attention by a passionate and inspiring war and history scholar who evoked the mythical 300 spartans, concludes as it commences, putting the rousing classical music set to enslavement and death in its proper, rightful context: liberation and life.