The newest episode of Rocca’s podcast, Mobituaries, begins with the story of a New York woman who, over 100 years before individualist Rosa Parks refused to be persecuted based on her race on a Montgomery, Ala., bus, demanded justice after being forcibly thrown off a segregated streetcar in lower Manhattan.

In fact, I learned that the woman, a black schoolteacher named Elizabeth Jennings, sought legal aid from a future president of the United States to sue the rail company for breaking the law. What’s more, her father, an inventor and businessman, enlisted others by waging a crowdfunding campaign for his daughter.

Jennings, who had additionally been physically assaulted during the crime by both the streetcar’s conductor and a New York City policeman, focused on a fundamental legal challenge which led to integrated transportation in New York. Her lawyer, Chester Arthur, was an abolitionist. He became an American president. 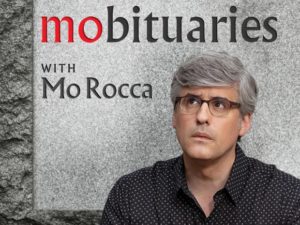 I also learned about an Ohio historical marker honoring the first African-American major league ballplayer who is not Jackie Robinson. What in Toledo, Ohio, is now called Moses Fleetwood Walker Square is dedicated to the Negro catcher who broke the color barrier when the Toledo Blue Stockings briefly joined the majors in 1884. Rocca details Walker’s little-known story.

Rocca tells another story about an early Hollywood filmmaker, a woman named Lois Weber, whose movies were both successful and unusual. He explores a birth control-themed picture this highly paid director made, how she may have leveraged her status to achieve success and that she became the mayor of Universal City, which today is still home to a major movie studio — one which released Green Book and Get Out and is owned by Comcast.

What I like about Mobituaries, in particular this episode, is the curious, easygoing and investigative manner in which Rocca discusses, interviews and goes by facts. With an enthusiasm one rarely hears on today’s broadcasting, especially modern programs including podcasts, Rocca examines each individual as an individual and provokes serious thought. He expends the right amount of time, effort and energy on certain facets and details. He doesn’t overstate certain aspects. Rocca emphasizes each individual’s achievements — for example, that Jennings’ father was a wealthy businessman who had been granted his own patent — in terms of what is essential.

Also, Rocca reaches a logical conclusion, while allowing the listener to judge for himself. In this case, as the period of time known as Black History Month begins, he cautions against overemphasizing who’s the first this or that in a given field of endeavor. Clearly, but gently, his implication is that such emphasis comes at the expense of the truth.

Never has this been a more relevant cautionary note.