The light, inconsquential Victoria & Abdul steps around its most pressing questions to deliver two solid title performances in what is best described as a going of age picture for Focus Features (a Comcast company, as the audience is obnoxiously reminded in opening titles). The story of a bond between an Islamic Indian servant and the queen of England romanticizes both multiculturalism and monarchy in a lilting, interracial fantasy which is both limited and relatively innocuous. 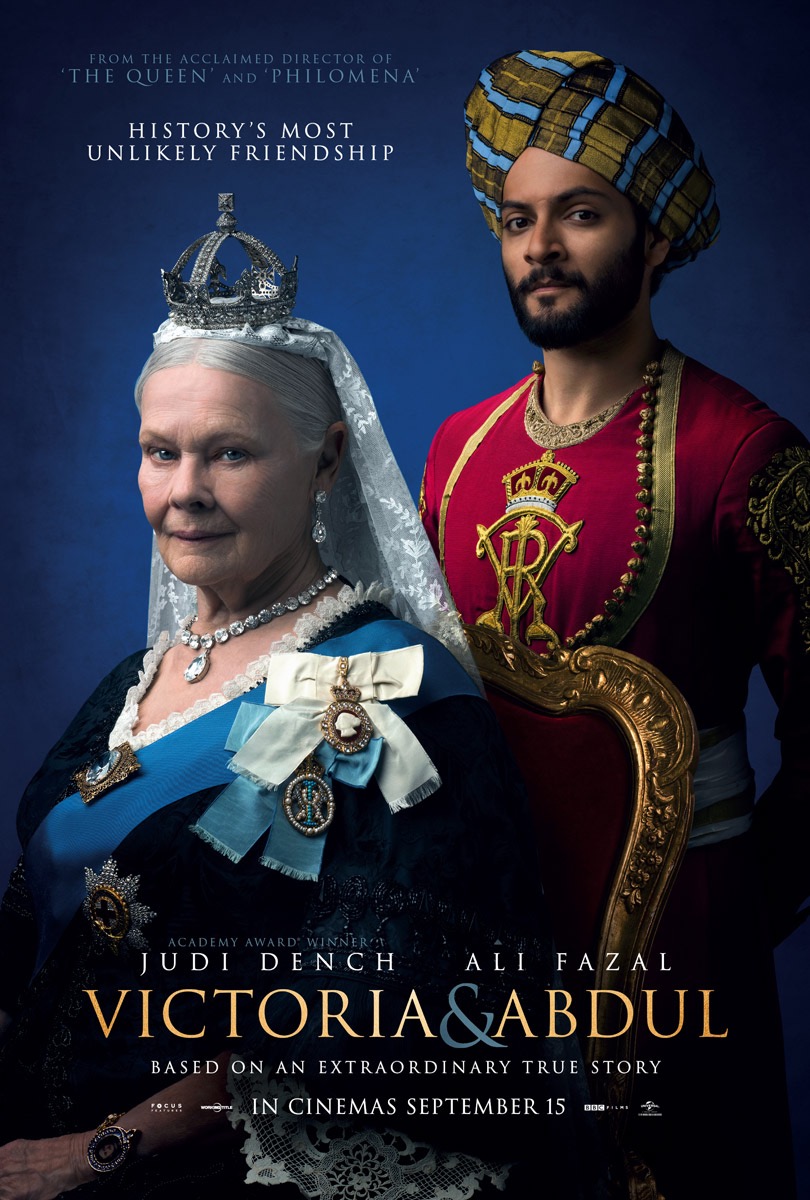 Written by Lee Hall (Billy Elliot and War Horse), Victoria & Abdul is almost entirely crafted in its poster, title and tagline that this is history’s most unlikely friendship. I kept waiting for the reason why as I was drawn into this exotic Asian world of the man summoned to serve the monarch. Without much to go by, Queen Victoria, portrayed by Judi Dench, who played the same queen in Mrs. Brown, and Abdul Kareem (Ali Fazal) are prisoners of their cultures, really, and they find in each other a range of shared values.

At least that’s how they are depicted in this adaptation of a book apparently based on the discovery of Abdul’s writings, though the opening credits also warn that license has been taken with their story, too. As it is, the old queen who feels like a silly old woman until the handsome young Indian looks upon her has lived most of her life. She slurps her soup, tears at her meat and gets a bit piggish with her dessert. But Queen Victoria is essentially dazed and dormant, literally sleeping and snoring when she first appears, until the warm, inviting gaze of the poetic coin-bearer enters her sheltered, scheduled life. When she brings him and his fellow Indian traveling companion, Mohammed (Adeel Akhtar), on board, it’s almost immediately like a geriatric Roman Holiday.

Directed by Stephen Frears (The Grifters, Florence Foster Jenkins, Mrs. Henderson Presents, My Beautiful Laundrette, The Queen, Philomena), who understands good humor, deft dramatic details and, above all, directing Judi Dench, whom he has directed in five movies, the cinematography, song and dance are as entertaining as one might expect. Thomas Newman’s musical score is among the best assets, as is the late Tim Piggott-Smith (Alice in Wonderland, Creedy in V for Vendetta) as Henry, one of the less caricatured royal attendants, who quite predictably do not accept Abdul.

For his part, Abdul from the outset knows English better than the English do. He’s eager to serve the queen, and eager to continue serving, after being instructed that essence of service is “standing still and moving backwards”, one of the better lines in Victoria & Abdul. Abdul is wide awake and ready to awaken Victoria from her slumber. It is hard not to like Abdul, except that he’s a blank slate, taking the 81-year-old woman on walks among the tree-filtered sunshine while he talks in bromides and tells her when she opens up that “we are here for the good of others”. He knows that she seeks knowledge and he steps up to provide it and, when it becomes clear that he’s Islamic (in a generic way) and keeps other secrets, he quotes the Koran and adopts the infidel and her country more or less as his own. As he quotes Rumi, teaches her Urdu, and, in a memorable scene, is enchanted by Puccini, Abdul trades as well as he’s able.

As a Moslem, Abdul is unholy, self-centered and inconsiderate. Taking in stories of Medici, he offers his own thoughts on art, the Taj Mahal and the Peacock Throne. He kisses and dances with the queen, who falls in love with love again while singing Gilbert & Sullivan and, tellingly, Abdul ignores Mohammed to whom he promised a quick return to the homeland. For her part, the queen disavows her staff and family and describes a burka as “splendid”. This is when it becomes clear that Victoria & Abdul amounts to benign playacting between two prisoner-impostors in a game well played. Victoria really may turn out to be a silly old woman out for a good time.

With a fatwa or Islamic death decree against the queen, disease and knighthood at stake, Victoria & Abdul could be much richer than it turns out to be. To its credit, and Victoria & Abdul is closer in theme and tone to Florence Foster Jenkins, Frears’ movie depicts what he called in an afterwards interview the “ridiculousness of royalty”. But skirting contradictions detracts from the movie’s intended sweetness. After all, there is nothing splendid about a woman being covered in cloth from head to toe on the premise that woman must be concealed because man is mindless. Or that a person with a crown can “have one billion citizens” after 62 years in office or that Abdul’s life is ultimately anything but deeply sad and subservient. But these two gamers forge a bond as true as possible, amid the magic of snowfall, as the pair trade gentle, deliberate breaths, his for the promise of her — and hers for the fact of him.

An interview with director Stephen Frears and Judi Dench after today’s screening at the ArcLight Hollywood was the usual mix of generic, fawning and flawed questions (for instance, Ms. Dench had to correct the interviewer, who apparently thought Frears directed her in Mrs. Brown) and silly audience antics. But seeing this grand movie star and her extremely talented director was worth the hassle and indignity.

Dench, who looks fabulous, discussed her contention that Queen Victoria was depressed at that later stage of her life “because there weren’t any more treats on the way”, as she put it. Victoria wrote up to four letters a day to Abdul, who, Frears wryly pointed out to laughter, was mere steps away in the royal palace. To one audience member’s question about what she’s learned during her marvelous career, Ms. Dench replied that she’s learned that she now grasps the truth about acting that less is, in fact, more, as in better, which she added she did not know when she was playing Ophelia on stage when she was 23 years old. And she also said that the camera picks up the thoughts in your head. After Frears, an excellent director with whom it’s clear she shares a deep connection, answered that he could not have conceived that he’d be sitting in an ArcLight Cinemas Q & A when he was young because he was constantly “terrified”, his leading actress jumped in and urged the audience to embrace the terror.

“Turn fear into a kind of petrol,” she said. Judi Dench commented regarding a question about locations in Victoria & Abdul that she loved the cold, wind and wet of Scotland. She interjected that the lack of sex after Mr. Brown died led to Queen Victoria being relegated to food as her only joy which was why the queen was obese. The actress who played Queen Elizabeth in Shakespeare in Love, an eccentric artist in Tea With Mussolini, damaged Agniss in Lasse Hallstrom’s The Shipping News, greedy Ursula in Ladies in Lavender, a predatory lesbian in Notes on a Scandal, Annie Hoover in Clint Eastwood’s underrated J. Edgar, title characters in Frears’ Philomena and Mrs. Henderson Presents, a boss in several 007 films and the glorious old diabetic radical Armande in Lasse Hallstrom’s enchanting Chocolat, emphasized that she is certain that Abdul prolonged the queen of England’s life.