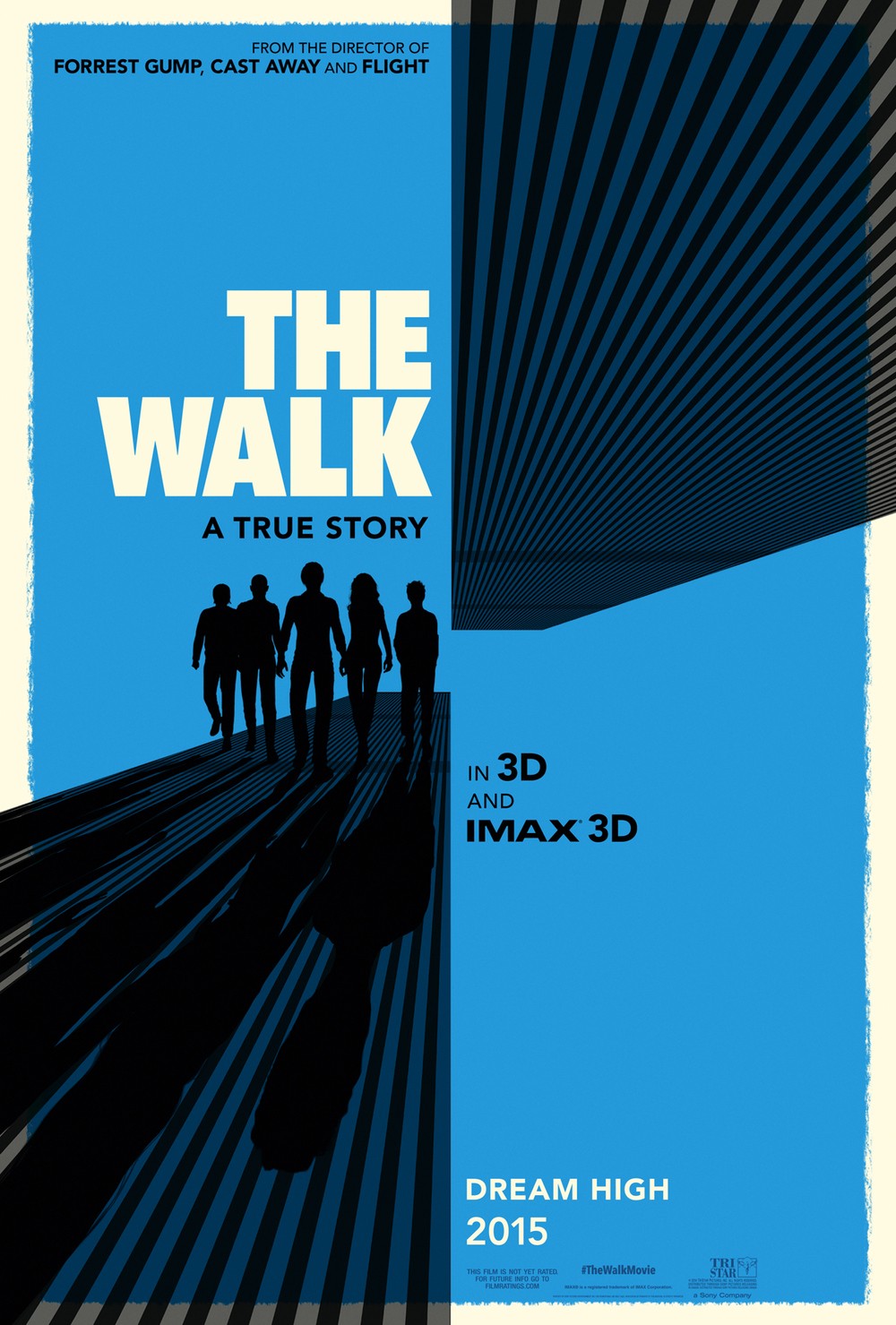 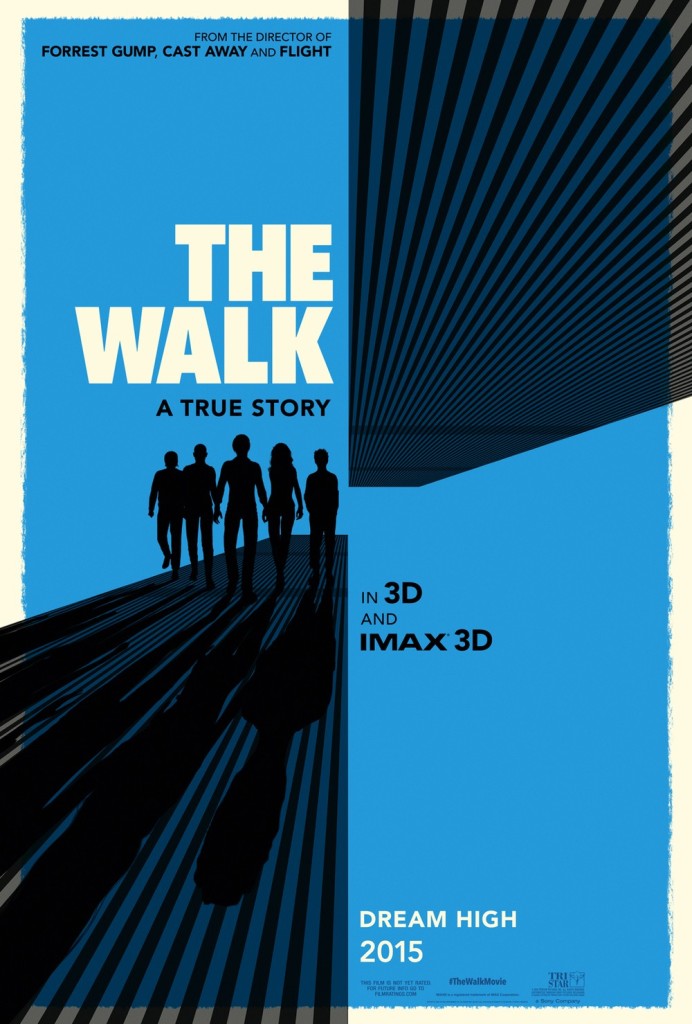 Director Robert Zemeckis (Back to the Future, Forrest Gump, Flight) perfectly applies his fascination with technology to storytelling in The Walk, which is one of the year’s best pictures.

On one layer, this is a light, whimsical movie about an acrobat taking his acrobatics seriously to prove an important point about human potential to the whole world. The visual, first-person narrative from the Statue of Liberty’s torch and other fanciful touches are part of the performance. Mr. Zemeckis, who also co-wrote The Walk, drives his idea of what one might call a performance artist’s creative need to act out over and over. Executed on the world’s tallest skyscrapers, a true story based on a high-wire walk by French acrobat Philippe Petit, it doesn’t get old and it doesn’t get in the way. As with any practiced, crafted and tuned live performance, the flourish enhances the daring act.

That the skyscrapers—and Mr. Zemeckis comes from a great American city of skyscrapers, Chicago—are the twin towers of the World Trade Center (1973-2001) make the events depicted in this groundbreaking movie more enticing.

Seen by this writer at Sid Grauman’s Chinese Theatre on Hollywood Boulevard in IMAX 3D, The Walk begins as the tale of a boy who seeks to create his own “sacred space” in a circle on the sidewalks of Paris. Of course, this puts him at odds with police and his own parents, who neither support nor understand his strange pursuits. Philippe (Joseph Gordon-Levitt) mimes, juggles and, eventually, walks on wire. It is his passion to command an audience’s attention to certain aspects of reality as he recasts them. Philippe performs magic. He rides a unicycle. When he sees a picture of the World Trade Center under construction in New York City, he makes up his mind—he calls seeing the photograph “providence”—about embarking upon his greatest adventure.

As Philippe plans his trespassing crime, he sees walking on a wire between the Twin Towers as a defining part of his own, personal journey. So he sets out to practice his skill at a circus, where he enlists the aid of a seasoned high-wire performer (Ben Kingsley), who becomes Philippe’s mentor. Here, too, he breaks away from tradition and his insistence on doing things his way leads to other complications. As Philippe loses support from blood relatives, he gains support from those related only by their shared passion for their own values, such as singer Annie (Charlotte Le Bon, The Hundred-Foot Journey) and photographer Jean-Louis (Clément Sibony, The Tourist). “I want to know more,” Philippe says at one point in The Walk. His chosen friends and master help him learn to acquire new knowledge.

The camaraderie is infectious, as Philippe attracts an audience, makes mistakes, expresses fleeting moments of doubt, falls and learns how to relax into the high-wire act. In the process, he becomes the ultimate live performer, appreciating his own choices, audiences and themes and gauging how to assess the potential for distraction, danger and the risks of the fears of others. For example, one of his team members has a crippling fear of heights. Philippe, in dealing with his own fear of losing the lad, leads by example to provide the right measure of confidence in his own ability. With Mr. Kingsley’s circus ringmaster looking on while dragging on a cigarette in an elegant holder, Philippe studies cable thickness and load strength with the precision of an engineer. No detail, lesson or fact escapes his notice or accounting.

He is a cunning criminal; a foreigner plotting to intrude upon the World Trade Center for subversive purposes, and with a van full of foreign accomplices no less. No one who knows the history of the Twin Towers can ignore the stark similarities and differences in his crime and the acts of Islamic terrorist mass murder that would blast and ultimately take the skyscrapers down in 1993 and 2001. Philippe practices on the Cathedral of Notre Dame in Paris before he comes to lower Manhattan for that exceptional act in August of 1974, and, in a sense, the closest he comes to having a religion is his steely conviction in himself and in the power to master his mind and body here on earth, strictly on his own terms and for his own sake.

The attempted coup is, as recreated by Mr. Zemeckis with amazing clarity and realism, body-tingling, nerve-wracking and breathtaking. The practices take place to Alan Silvestri’s jazz score. The act itself happens in silence or with music that matches its sense of the sublime. “The outside world starts to disappear,” Philippe recalls of his day on top of the world. “I feel the wire supporting me with the towers supporting the wire” and, in an instant, at the birth of the rising steel skyscrapers soaring into the clouds, the Frenchman who juggled for money on the sidewalks of Paris enacts something both beautiful and defiant in perfect unity with nature and the manmade. The Walk is meant for this moment, and everyone, especially Gordon-Levitt, cast and the special effects crew led by Mr. Zemeckis, lets it linger in wonder and amazement for a spectacularly powerful climax in cinema.

The Walk is that soulful. Who better than an independent Frenchman standing on top of France’s gift to America to stir the spirit of free enterprise that built the greatest nation on earth? Petit, who, in reality, called for the World Trade Center to be rebuilt, reduces his accomplishment’s metrics to its essential meaning in the beginning of The Walk. He speaks of a choice between life and death. This is the unspoken, fundamental contest between the World Trade Center acts of 1974 and 2001. The Walk, in two parts playfulness and precision, depicts peace and serenity as the proper reward for honoring the manmade upon its creation. Philippe Petit put an acrobatic accent on two great symbols of American capitalism; Robert Zemeckis brings the performance and its exhaustive practices gloriously to the screen.

If it achieves nothing more than this, an exact recreation of the single most life-affirming moment in the World Trade Center’s brief history here on earth, The Walk, which does what America should have done and rebuilds the Twin Towers, is worth every second of its two tantalizing hours.