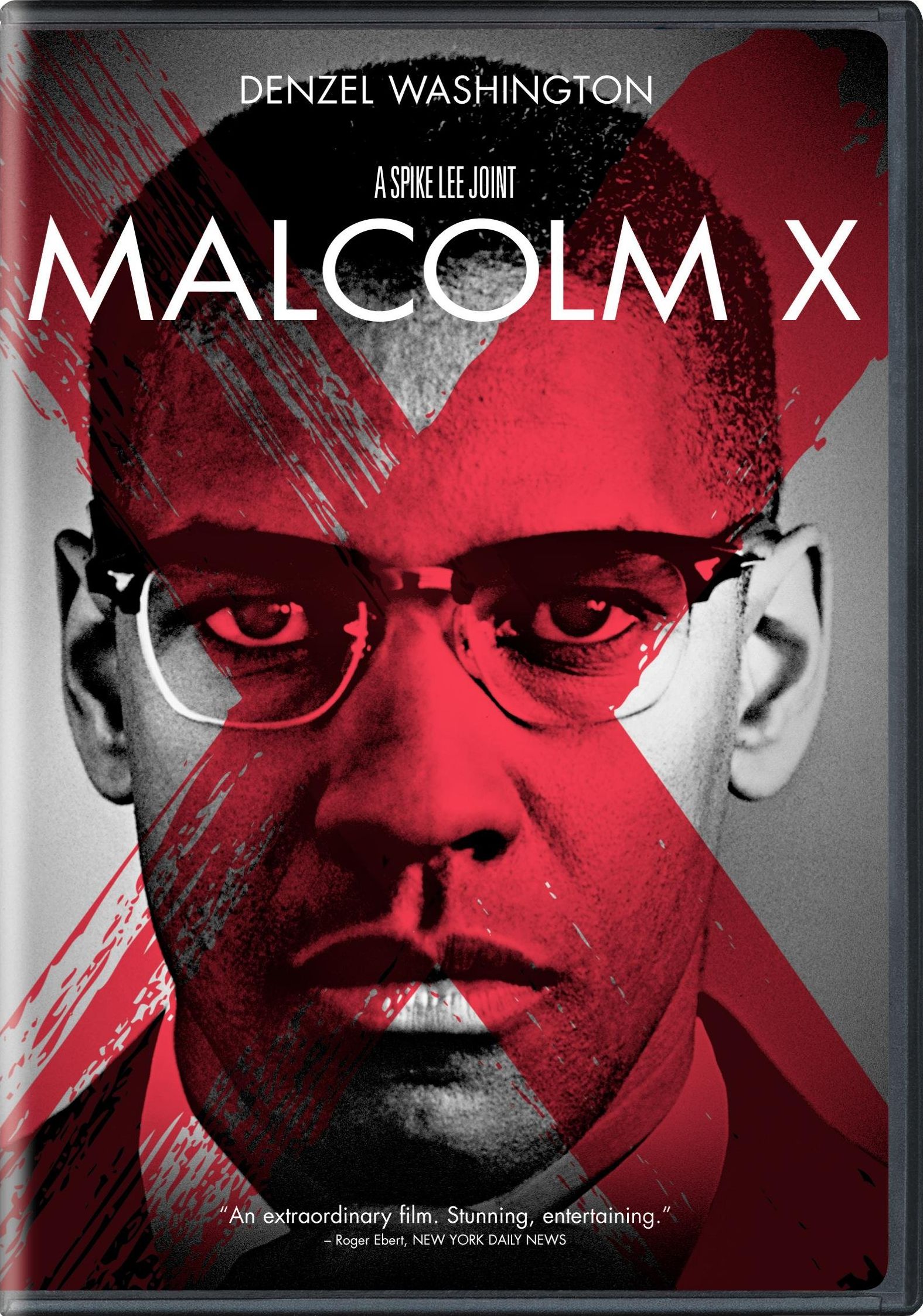 This phrase asserting that the ends justify the means, a rationalization for tyranny throughout history, is the movie’s theme. Lee capably gives “by any means necessary”, which gained acceptance among black supremacists with the Black Panther movement during the rise of the New Left (Black Panther founder Bobby Seale is featured among this cast of hundreds), a cinematic flourish. Malcolm X, with Denzel Washington in the title role, is memorably distinctive.

Lee (Do the Right Thing) dramatizes the life of hoodlum Malcolm Little, who converted to Islam in prison, adopted the X and called for racial segregation, in broad but skillful strokes. As with the mediocre depiction of X’s peer, Martin Luther King, in Selma, this movie is fragmented and televisionary, not really epic in scope, and many scenes in the 3-hour movie are superfluous. But as with King at Selma, there is much in his life which is meaningful and from which the true freedom-fighter can gain and learn. Lee’s journalistic approach is often even-handed, though it is also slanted and diminished by racism.

Malcolm X begins with an anti-homage to the famous scene from Patton (1970). An American flag writ large appears. It soon begins to burn. So commences Lee’s movie about x-ing out what America is founded upon, what America stands for, what America means. Blurry, black and white images of a Rodney King beating video that sparked the 1992 Los Angeles riots are seen, clearly establishing this film as more of a statement than a biographical picture.

Biographical fragments are pictured, typically very well, with early flashback scenes of the Ku Klux Klan attacking the Little family’s home near Omaha, Nebraska. Malcolm’s father was a black separatist, too, a fact which is lightly treated, but he carried a gun and defended his family and the parallels to Tea Party activism are numerously unmistakable, though certainly this was not Lee’s intention.

Nevertheless, Little’s attempts at self-reliance, his hatred of government intervention in private lives—”the state agency destroyed my family”—and his admiration for the closest he could find to a man of honor (the always excellent Delroy Lindo) dramatize that his potential was real, his premises and choices were mixed and, whatever the rampant racism of American life, which was real, he had dominion over his own life. As with today’s persecuted Americans, including those targeted such as Tea Party groups by the government such as the IRS, Malcolm Little had control over his own life. Lee shows this. Lee shows that Little chose to be a con man, a thief, a hustler.

Mr. Washington’s smooth, arch portrayal captures the hustle in essentials. The hustle, which is partly an upright attempt to gain value and partly a downright play on putting one over on others, became Malcolm’s stock in trade. This is what he knew. That it morphed into a movement and gave birth to the race hustle—look for its main practitioner Al Sharpton in a cameo—should be noted by today’s cultural students and scholars. The hustle as Americans know it starts here with Malcolm X, who twists the self-made man into the self-made thug-turned-Moslem. It is mixed. It is born of real injustice. It could have gone either way.

Little first chose one way, crime and dishonesty, until he chose another way, which Malcolm X would have the audience believe was motivated by honest pursuit of the good: spiritual peace and honor through a radical, new intellectual import targeting the American Negro: the Nation of Islam.

With Christopher Plummer (The Sound of Music, The Amateur) as a prison priest who serves as the bogeyman—the “white devil”—for Malcolm to use to strengthen his newfound prison conversion to Islam, he slowly applies and integrates his worship of an Islamic deity, Elijah Muhammad, into his thinking, his habits and his practices. He wills himself into the man of faith, one without an ego, without thought. Seeking through Islam to free himself from “the prison of [his] mind”, Malcolm Little chooses to call himself Malcolm X, though curiously Malcolm X doesn’t make much of the name change, possibly because the X designation never caught on.

But Islam did and it is still spreading among non-whites in America, the targeted demographic by African Moslems, whom Malcolm visited in Africa, and it’s spreading to whites, too, as by now everyone knows. Lee romanticizes this particular religion, gently taking Angela Bassett’s meek Islamic woman, with whom Malcolm fell in love, from observant headscarf-wearing Moslem to uncovered housebound birthing vessel with not a trace of personality change other than her saintly concern for Malcolm and her marriage. The children are seen, not heard, and their father is never seen parenting them even for an instant. He’s more interested in giving speeches than in loving his wife or his children. Women are as segregated by the radical black Moslems as the races and this is depicted without judgment, and there is plenty of what would today be called “slut shaming”, again with not a whiff of castigation. Severe condemnation is reserved for whites only; as in today’s leftist circles, Islam and its archaic codes get a pass.

“The key to Islam is submission,” Malcolm X correctly states, so, in this sense, Malcolm X is honest. Malcolm X submits “100 percent”. One of the most interesting aspects of this star-studded movie, which is based on The Autobiography of Malcolm X as told to Alex Haley (Roots) and co-written by James Baldwin (Go Tell it on the Mountain), though his estate asked that his name be removed from the credits, is how it depicts the turn on Malcolm within the Nation of Islam. Led by Elijah Muhammad (Al Freeman, Jr.), ironically evoking charges against the film’s financier, Bill Cosby, Malcolm’s incendiary rhetoric—he stated that he was “glad” JFK was assassinated and that the murder was an act of “justice”—made his ascent more problematic for the cult.

For his part, Malcolm, who agreed with racists such as Bull Connor and George Wallace that people should be judged and separated based on race—”the only thing I like integrated is my coffee”—appeared to have shifted in his thinking after the trip to Africa. Malcolm X shows that he had regressed from being meek, humble and servile to whites while working on trains (“yes, sir”) to being meek, humble and servile to blacks while working in mosques (“yes, sir”). It is also impossible not to notice nearly 25 years after this movie was made that the nations whose black African leaders are depicted in the backdrop of a street rally mural have been subjugated to a barbaric new Islamic caliphate that’s spreading across what was once known as the dark continent; Africa as a symbol for black supremacy has become a breeding ground for the forces of the most brutal religious doctrines known to man.

Most people know what happened to the small-time crook who took up with a white woman and became a man of faith, urging blacks to separate from whites, “get off welfare”, meet with Martin Luther King at Selma—curiously omitted here—and usher in a “time for martyrs.” He was brutally gunned down by black Moslems in Harlem. But his story is part of modern American history and, as I wrote in my review of distinguished black scholar Manning Marable’s epic biography, Malcolm X, any one who seeks to know how America came to be insidiously threatened with Islamic holocaust ought to study this part of history, which is inextricably linked with Americans’ refusal to explicitly name and renounce racism’s source, collectivism, leading American Negroes into philosophies for dying, not living, on earth. As Ossie Davis, who delivered Malcolm X’s eulogy in life and in this film, said of Malcolm X, and he intends this as a compliment: “He didn’t hesitate to die.”

Whatever its flaws, excesses and gaping holes, Spike Lee’s uneven Malcolm X at least dramatizes that Malcolm X, who may have succeeded in ushering in an era of self-sacrifice, didn’t really acquire the tools to live.

The 1992 picture screened with an appearance by the writer and director at TCM’s Classic Film Festival on Hollywood Boulevard. Unfortunately, a dull, unexceptional interview was conducted and Lee never did discuss the essentials of Malcolm X’s experience in life, including Lee’s treatment of Islam and how Islam has manifested in today’s world. There was no mention of the Islamic terrorist attacks on America in 1993, 2001 or 2012, let alone at Boston or other recent acts of war, or the fundamentalist Moslem morality of persecuting the homosexual, the woman and the infidel. Lee did discuss Denzel Washington’s decision to stop eating pork and drinking alcohol, in observation of Islamic practices, and hiring an Islamic camera crew to film certain scenes.

But it is a telling sign that Spike Lee was flatly refused admission to film in Mecca for Malcolm X, proving again that the “religion of peace” grants no peace to the infidel of any color. To his credit, Lee did shoot down a jab at the project’s original director, Norman Jewison (In the Heat of the Night), and came to Jewison’s defense, and he credited talk show hostess Oprah Winfrey with giving him the money to finish the movie when Warner Bros. balked. But, when I called out a question asking if he had read Manning Marable’s excellent biography of Malcolm X (read my review here), Spike Lee, in his New York Yankees’ cap, turned to me and gestured with an equivocal horizontal hand wobble, which is too bad, because the book is better than the movie and he might have gained new insight about an important figure in U.S. history.