Written and directed by Kasi Lemmons (Black Nativity, Eve’s Bayou) with screenwriting and story credit to Gregory Allen Howard (Remember the Titans), Harriet is the first major depiction of Underground Railroad leader Harriet Tubman. This is a labor of love from Lemmons, so audiences should expect music, religion and thoughtful, striking filmmaking.

Stormy skies set the tone, which comes over Bucktown, Maryland in 1849. The pre-Civil War drama gets moving into the gospel, rhythm and blues of slave life with an introduction to the title character, portrayed by Cynthia Erivo, who’s perfect as the runaway slave who became an American heroine. Soon thereafter comes an appearance by Lemmons’ husband, Vondie Curtis-Hall, as a preacher. He’s outstanding (as usual) if underused.

Harriet is not flawless. There’s a wealth of material to assimilate here. Lemmons does an amazing job of pulling it together. My thought is that she probably needs to get more practice and make more movies. 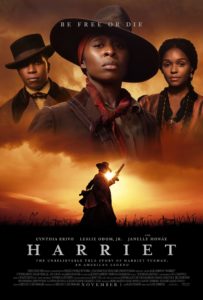 But her Harriet is a triumph. This is because she weaves various known facts about Tubman, including her mysticism, faith in God and illiteracy, certain liberties and three major arcs of neatly integrated pieces of somber, poetic music that hold, fold and seal like flaps of envelopes the painful lessons of the American South’s enslavement of humans. Harriet is prayerfully, deeply musical in this sense. It’s moving and haunting. This is as it must be.

That, how and why the heroine — and Harriet Tubman’s portrayed as a heroine, not some sort of mindless anime-like automaton programmed to wisecrack like one of those female comics characters — chooses to become herself is the picture’s theme. Accordingly, her relationship with her slavemaster’s son, Gideon, portrayed by Joe Alwyn (Billy Lynn’s Long Halftime Walk) as aimless and godless, takes interesting turns.

After the first of many premonitions forecasts her breaking free, the slave woman runs away. She encounters the first of many honorable men and women — white and black — who seek to help her escape to reclaim her freedom. One of them takes the terrified young fugitive in his hands and instructs her: “Fear is your enemy”. As the movie’s tagline indicates, she soon faces and names her fundamental choice to be free or die.

Pennsylvania’s sun-kissed landscape, where she soon discovers the Anti-Slavery Society in the city which was America’s first capital, Philadelphia, shows this driven, hardened former slave the first glimpses of her remarkable future. Yet another stranger in the street takes kindly to her and, before rendering another act of charity, offers advice that, here in the North, she ought to “walk like you’ve a right to …” Despite post-traumatic flashbacks, she does, finding a black man working a printing press and her own, new way in the free part of the country.

One of the film’s most intelligent aspects (besides an insistent depiction of human goodness) is the portrayal of the vast, serious band of political activists known as abolitionists. They were a heroic, though religious, band of men and women who were steadfast in their dedication to abolish slavery. Without them, Harriet Tubman’s heroism, which according to this movie included her liberating over 800 slaves, most in the military battle she led against the Confederacy during the Civil War, would not have been possible.

One of them is a lovely, dignified woman named Marie (Janelle Monae; Moonlight, Hidden Figures) who coaches, teaches and aids Harriet Tubman including in the virtue of the Constitution’s Second Amendment. This is but one of many moving parts in this jaw-dropping story of the individual’s defiance against the state.

Another is the notion of slaves as a status symbol. This fuels and is fueled by the mythology born out of Harriet Tubman’s courageous and brave incursions down South to rescue slaves. Because she makes the dangerous infiltrations in costume, even dressing as a man, she somehow becomes known as Moses. There’s more, as the woman known as Moses faces the abrupt and deadly aftermath of the Fugitive Slave Act, the fact that not every slave wants to do what it takes to be free and a young black man known as Walter (Henry Hunter Hall, stealing every scene) who catches runaway slaves.

Harriet’s fidelity to history is best left to be examined by historians but, based on what I do know about this liberator, one of my earliest heroes in life, the movie dramatizes the essence of her life. A scene in which one who’s seeking to pass as white in drag is questionable at best and Gideon borders on a supervillain though Alwyn’s excellent acting helps.

Harriet is an inspiring dramatization when we need it most of one individual who wanted to be free — an illiterate woman who, as depicted here, correctly captured the smallness of the enemy by rightly denouncing the Confederacy as a wicked, lost cause — and rose to moral righteousness in pursuit of her own happiness.

Harriet Tubman, like Patrick Henry, demanded the right to choose “liberty or death”. Harriet, in wrenching detail and powerful drama, shows that she who chooses to wade in the water toward the properly promised land lives in liberty and her own glory here on earth.