At two hours and 45 minutes, A Hidden Life ought to have been an unforgettable epic given its topic, one man’s refusal to sanction Nazi Germany. Unfortunately, instead, writer and director Terrence Malick’s movie suffers from too many problems. Like Malick’s overly romanticized 1978 farm drama, Days of Heaven, the distinctly cinematic director takes an approach that compartmentalizes the leading couple to the point of detachment. They’re neither sufficiently detailed and realistic to be plausible on the film’s terms nor romantic enough to be as noble as Malick apparently intends. 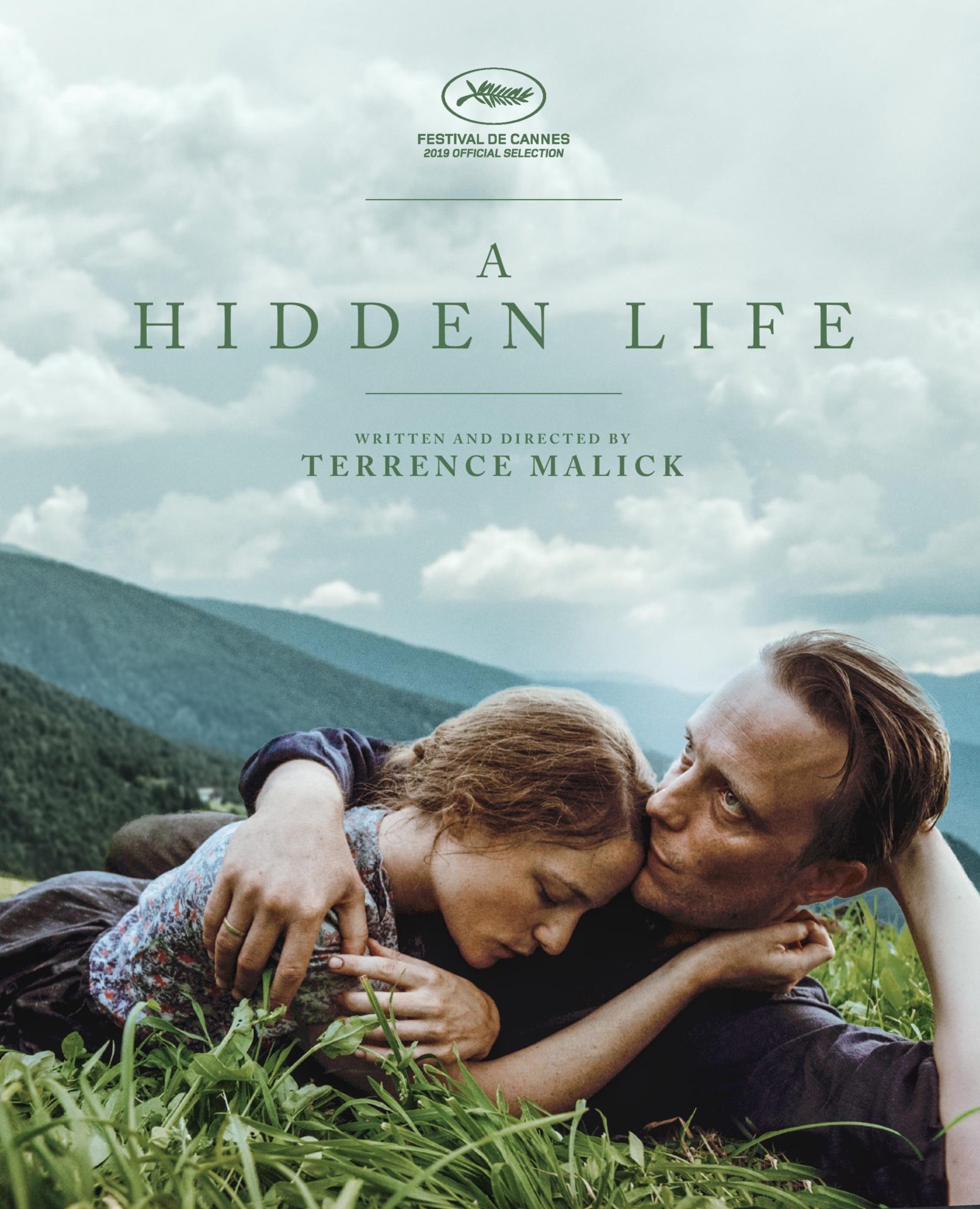 It takes a while to realize that A Hidden Life isn’t as profound as Malick evidently must’ve thought it could, should or would be. My first clue was the audio introduction, which precedes the opening pictures. The sounds of wind, insects and nature envelop the audience. This takes the audience into the setting, which is Austria’s mountain valley farms in 1939. A narrator comes next, speaking in the past tense beginning with an admission of error as black and white footage of the National Socialist acceptance and spread over Germany sweeps over the screen very effectively, demonstrating more or less that the whole of Germany knowingly and enthusiastically accepted the Nazi philosophy.

To anyone who’s seen the trailer or knows history, the quaint Austrian farming village and its young romantic couple (August Diehl and Valerie Pachner) clearly haven’t much of a chance. As in Days of Heaven, Malick lets the couple frolic in the fields, which is mostly what they do and for a long, long time. They’re soon married, with a few kids appearing at an early point, always with the Nazi threat looming but never in clear and explicit terms. By the time husband Franz (Diehl) is called upon to enlist in the Army and swear an oath to the Nazi dictator, which he declines to do, neither he nor anyone in town has really mentioned, let alone discussed, the Nazis; men are off to train, fight and defend Nazis. Women, children and old men are left alone to toil in the fields.

Those left behind still laugh, play, raise pigs and, amid neatly interspersed pictures of Nazis, life goes on. Only Franz objects to the takeover of Austria by dictatorship. That he does so without much of a reason is treated as unexceptional. His opposition is never really named and identified. It’s just something he does that’s regarded by villagers as unusual, then as unpatriotic and by loved ones as unusual, then inconvenient. The Nazi invasion comes without much impact other than the men being drafted and conscripted into military service. Jews never merit mention in A Hidden Life, remarkably. Every aspect of Nazi Austria just sort of happens without much rancor, notice or fuss.

Perhaps this is Malick’s point. But the lack of any exposition of the origin or progression of Franz’s convictions certainly makes more glaring that the leading man never articulates his opposition, which forms the basis for the entire film. The vacuum gets filled, slowly but surely, with faith and religion.

A Hidden Life depicts Austria as lovely and enchanting, with its fields, hills and simple people as God’s country and people, contaminated by the Nazi invaders through very little fault of their own. When Franz asks his “dear wife … what’s happened to our country?” I couldn’t help wondering why it took him so long to ask himself the same question. I also wondered why he and his wife never ask in the present, not the past, tense. That one so resolute in refusal does not ask “what’s happening?” before asking “what’s happened?” strikes me as impossible or unlikely.

As Franz pays the price for a refusal to submit, asking his God-fearing wife to “pray for me” when he’s jailed as she takes comfort in the land’s “wind, wheat and sky”, Nazis try to reason with him to cease his stubborn refusal to renounce his opposition. One of his jailers promises him that he can go free.

“But I am free,” he replies in what could’ve been A Hidden Life’s best line. Malick expects the audience to intrinsically grasp why. Franz’s refusal is less a principled stand than the refusal to put faith in the state above his faith in God, though even this is portrayed as too abstract. Heaven’s light shines upon him, while his long-suffering wife, working the farm and raising her kids with her sister and mother-in-law and being shunned by pro-Nazi villagers, surrounds herself with crucifixes, church attendance, a priest, prayer and pictures of Jesus Christ. For their part, the children are seen and not heard, playing and smiling as if largely and blissfully ignorant of their poverty, deprivation and absent father.

Compounding these problems are the languages of A Hidden Life, which switch from foreign to English in key scenes and transitions. Like its enticing advertisement, and most of the movies Malick makes, A Hidden Life looks like it contains great filmmaking, holding the promise of deliverance and adding up to a momentous epic. Yet, while it thankfully doesn’t sugarcoat the true life based consequences of opposing Nazis, it is too satisfied to take itself on faith.