The newest movie directed by Clint Eastwood, The 15:17 to Paris, is as plain and perfunctory as its title. Screenwriter Dorothy Blyskal oversimplifies the heroes’ decency, mixing in clashing motivations (possibly taken from the heroes’ book upon which this film is based). Mr. Eastwood’s minimalist filmmaking and decision to cast the three American heroes whose story unfolds here puts 15:17 to Paris in a striking contrast to today’s overproduced movies, such as Marvel’s mangled Black Panther, though both movies have conflicted themes in common.

Similarities end there. For starters, unlike Marvel’s movies and like the heroic story of 12 Strong, the extraordinary events depicted in 15:17 to Paris happened. Three Americans chose to act upon their own judgment, tackling an Islamic terrorist rampaging with an arsenal through a train, capturing, detaining and hogtying the jihadist, securing the train and medically treating wounded passengers. The three Americans saying “Let’s go” recalls Flight 93’s American passengers saying “Let’s roll” on 9/11. In this case, saving everyone on board. 15:17 to Paris depicts the Islamic terrorist attack, which is unfortunately never branded as an Islamic terrorist attack, and what made three friends since childhood in California the type of men to shut it down.

That Alek Skarlatos, Anthony Sadler and, especially, Spencer Stone, who portray themselves, went from forgotten middle school students to European hostel heroes tracks back within each individual to mutually shared confidence in being a boy with the world as his to master. This exuberant boyhood is cultivated by the boys themselves, who play war with toy guns, study combat with maps and certain gaming scenarios and think of themselves as worthy in themselves, not as means to the ends of others. Raised by single mothers, except for Anthony, a charismatic black kid whose home life goes unseen, these boys struggle from 2005 to 2015 in today’s government-dominated educational system, which ignores or neglects boys. When switched to a religious school, problems persist and deepen. But Alek and Spencer also meet Anthony, who becomes their playmate and, in a way, mentor. Anthony, the least anxious of the trio, is the one who challenges Spencer, who’s the center of The 15:17 to Paris, which intersperses flashes leading up to the jihadist siege. 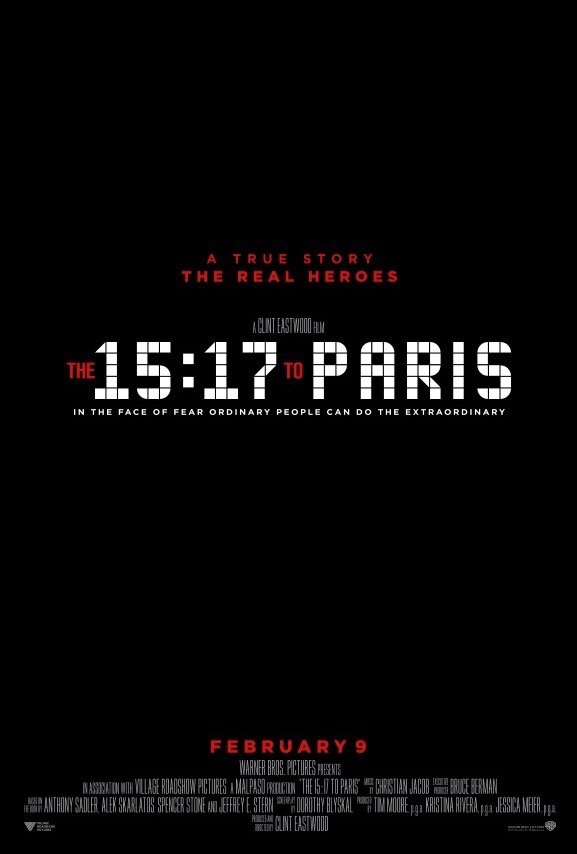 Anthony’s candor is his armor, as anyone who watched his breathtaking accounts of the attack knows. The white boys enlist in America’s military, Spencer seeking meaning in life and Alek, whose mother says she talks to God, driven by legacy. By the time they trek across Europe, they’ve been three decent, productive boys who seek to acquire knowledge, trade and play to live meaningful, enjoyable lives. Whatever fleeting notions and hunches anyone voices, and 15:17 to Paris sends mixed signals, these three move toward action with a sense of purpose. They expend effort. They practice. They fail. But, always, these boys prepare for life as men.

For instance, during an alert at Lackland Air Force Base, Spencer goes rogue. But, in doing so, Spencer shows strength and preparedness. Called out by his instructor, he knows exactly why he chose to disobey orders (and he has a point). Alek, deployed in Afghanistan, becomes the reason his fellow soldiers must divert from plans, endangering the team. But Alek, later visiting Germany, honors an ancestor’s military service, demonstrating a commitment to think, re-think, act and become his best. In a smaller way, brandishing a selfie stick while being a tourist with Spencer, Anthony, too, learns from his mistakes. Each superficially bounces like a rolling stone toward the unseen, the unknown, like many young Americans. But each acts like he knows that he’s taking charge of his life and that he likes and knows that he’ll earn it.

This may be Mr. Eastwood’s point, and movies he directs, such as Sully, American Sniper and Jersey Boys, reflect the idea that Western man is good, decent and honorable. Clint Eastwood is too journalistic and pragmatic to fully dramatize this theme but his movies tend to be good, sometimes excellent.

With the actors portraying themselves coming off as more self-conscious than natural, The 15:17 to Paris is less a docudrama than a stone-faced re-creation. It’s too scripted, stiff and staged. Yet 15:17 to Paris reconstructs their lives and re-creates their goodness, making the climactic terrorist attack by the religious fundamentalist (Roy Corasani) more tense and dramatic. Every encounter in Europe, especially boarding the Paris-bound train when they help an old man, is benevolent. Whether speaking in the foreign language of the land they visit, flirting with young women or trading while traveling, no one is the Ugly American, to use that hackneyed term. The men, as I previously wrote, represent the heroic American — each a kind of handsome, upright cowboy.

Clint Eastwood’s The 15:17 to Paris contrasts these innocent, cheerful, peaceful Westerners, unashamed of their Americanism and wearing symbols of Adidas, Yosemite and Los Angeles basketball, with the barbaric religious terrorist, whose eye is evil and whose face is blank. The muffled sound of the siege on the train to Paris follows ramblings about God, destiny and determinism and Spencer, who more than anyone saved the 15:17 to Paris, says a prayer. But a French statesman calls these three men what they are: Americans (also a Brit) who “fight for liberty”…to “save humanity itself”. As with his movie about Mandela in Africa, Invictus, Clint Eastwood’s underproduced new movie is probably too muddled and plain to convey its theme that the essence of being American means reverence for life — and that it’s usually the American who achieves peace and harmony and fights to preserve both.