This is a good war movie with moments approaching greatness. If you’ve enjoyed Thank You for Your Service, 13 Hours, American Sniper and other movies about the nonstop, unending U.S. military response to the Islamic jihad slaughter on September 11, 2001, you’re likely to appreciate 12 Strong for its pointed depiction of American heroism. 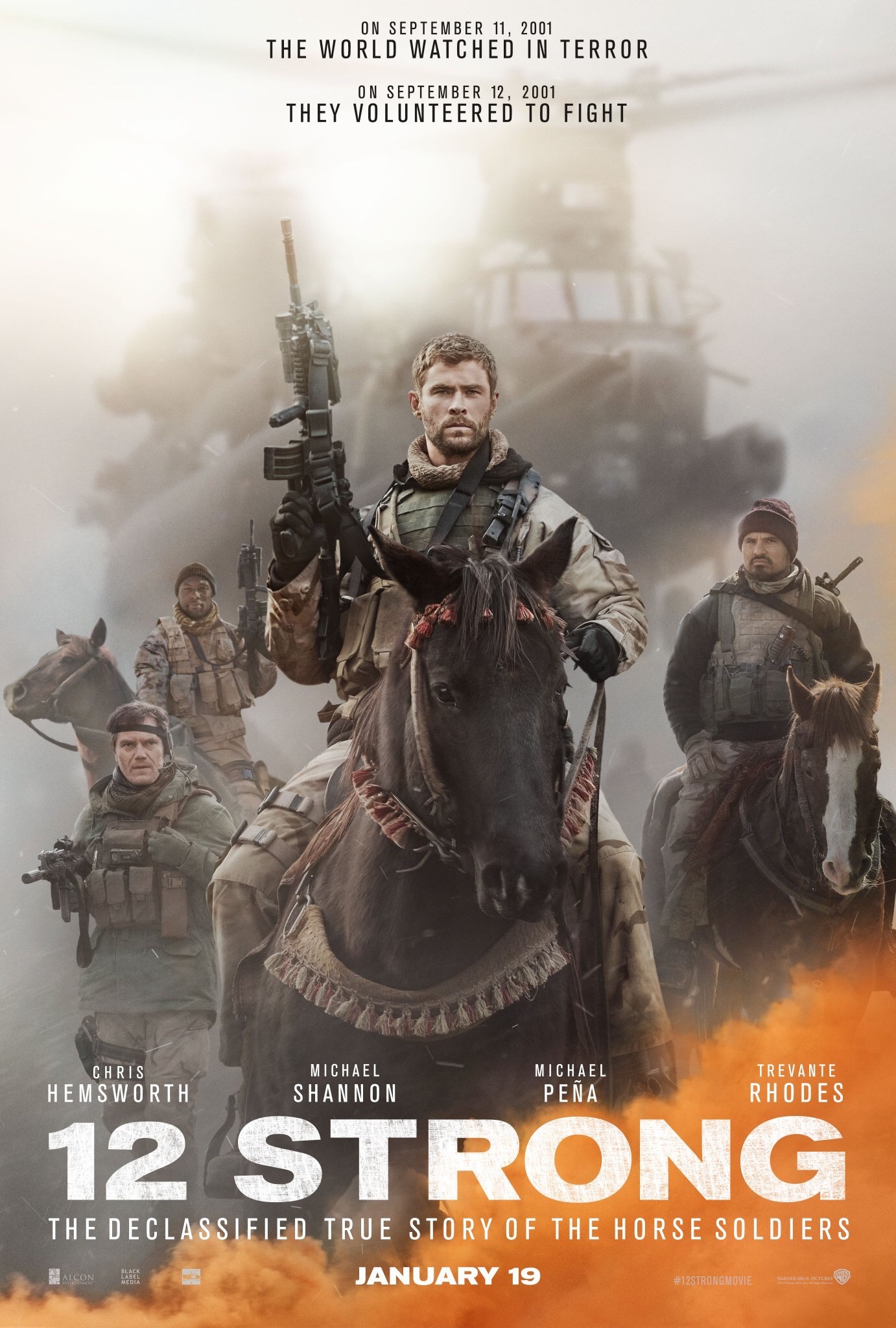 I figured this would be a proper, which is to say relatively straightforward and unfiltered, dramatization from its setup scenes. 12 Strong rightly begins in 1993, when Moslem terrorists first attacked the Twin Towers. Then, to other acts of war on America in 1998 and 2000. So, right off, there’s at least an attempt to provide pretext to the story of 12 heroes who volunteered to deliver America’s first post-9/11 military retaliation, which is one of the few the U.S. got exactly right.

To underscore this unequivocal rightness, the Army team’s single-minded captain (Chris Hemsworth, Thor: Ragnarok) asks the helicopter pilot after the pilot tells him that the aircraft is descending over northern Afghanistan: “On purpose?!” The captain’s short, urgently repeated demand signals the caliber of soldier about to disembark and confront the guerrilla Islamic terrorist state. The band of men do not just listen, obey and follow orders: they make crucial distinctions, take command and act with swift thought and precision, leaving nothing to the aims — and sloth and errors — of others, including those in their own army.

The captain’s leadership is based on study, clarity and reason. From camping his men at an allied Afghan base 40 miles from their terrorist center target to leading the horse soldiers’ charge toward the enemy’s worst weapon, Hemsworth’s captain examines every angle, nuance and trajectory necessary to achieve his goal. Director Nicolai Fuglsig shows fidelity to the essential facts of this hard-fought, extraordinary and, yes, glorious military victory. He doesn’t adorn the movie or characters with frenzied or slow-motion moments of blood splattering and bombs exploding. There’s no showboating. There’s the hard work and grit of men fighting to avenge their country and defend their lives, fortunes and future.

The men include the silent loner (Trevante Rhodes, Moonlight) who becomes the fixation of an Afghan boy. And his opposite, an expressive fighter who once taught history (Michael Pena, Lions for Lambs, The Lucky Ones). Or the team’s chief warrant officer and voice of reason (Michael Shannon, Mud, The Shape of Water). Some of the 12 Strong have wives, some have kids, and most have gripes and doubts, though 12 Strong stays on track and avoids war movie cliches. They all trained for war in the Middle East and they all want nothing less than victory. 12 Strong does not deal with the fact that Bush, Obama (and, so far, Trump) equivocated, appeased and never came close to wiping out states that sponsor Islamic terrorists let alone declaring, waging and winning the war the enemy started.

The Jerry Bruckheimer (and scads of others) produced film, co-written by Peter Craig and Ted Tally and based on the book by Doug Stanton, does, however, allude to U.S. military incompetence. So-called smart bombs fall on the wrong coordinates. There’s an implication about friendly fire (remember Pat Tillman). And then-Secretary of Defense Donald Rumsfeld’s bravado, which would thrust America into an unwinnable war in Iraq, gets an apparently and deservedly fact-based dig.

12 Strong focuses, though, mostly on what it takes to render the deadly counterstrike to 9/11. From the Northern Alliance faction leader skillfully portrayed by Navid Negahban to the sharp colonel incisively portrayed by William Fichtner, the team earns and keeps the support of superiors and natives alike to trudge through the passes and trails of the Taliban-run country. Without neutralizing moral judgment on Islam, the religion which motivates the enemy, 12 Strong puts the campaign in clear perspective. Females are slaughtered like American infidels, simply for seeking knowledge. “God is great!” goes the familiar death call as the U.S. first applies its antiquated rules of engagement (which got worse after this campaign). So don’t expect the now-incessant and tired evasion of any mention of what makes the enemy evil. A murderous mullah speaks the truth about his religion.

Also, don’t expect evasion of what makes Americans good. Though 12 Strong is a good, not great, war movie depicting soldiers in a particularly grueling combat, and I do wonder whether the team declined to wear helmets throughout the battles and trek, the two-hour film lets its heroes shine.

Thankfully lacking vulgarity, and with a stirring gallop to answer the Flight 93 passengers’ call to arms, “Let’s Roll”, 12 Strong is the inspiring tale of the twelve soldiers who rolled. They did it weeks after America was attacked in New York City and Washington, DC.  They did in weeks what experts projected would take two years. This combat picture shows that twelve men rolled with the thunderous strength and purpose that America and Americans deserved. It pretty much ended there. It hasn’t happened since. 12 Strong demonstrates with power and skill that this victory did happen.