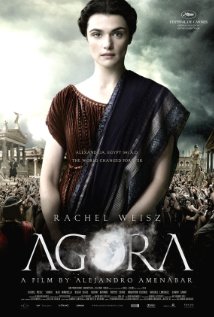 Filmed in Malta between March and June 2008, Agora, co-written and directed by Alejandro Amenabar (The Sea Inside), takes place in ancient Alexandria, Egypt.

The story concerns the rise of religious fundamentalism through the lives of three individuals: astronomer Hypatia (Rachel Weisz), whose father Theon (Michael Lonsdale) is the last director of the surviving library in Alexandria, and two young men in love with her: a bright, willful student named Orestes (Oscar Isaac) and her equally intelligent slave, Davus (Max Minghella). The motion picture will be playing in both New York and Los Angeles by June 4, 2010.

Director Amenabar, whom I first met and interviewed at the Mondrian Hotel on Sunset Boulevard to discuss his haunting, Oscar-winning The Sea Inside in 2004, talked briefly with me about Agora from Spain during an interview by telephone. The South American-born composer, writer and director, who speaks in a thick Spanish accent, talked about Agora’s ideas.

Scott Holleran: Is Hypatia an agnostic or an atheist?

Alejandro Amenabar: She is obviously looking for something [meaningful] but she doesn’t believe in God. I don’t think the word atheist even existed in that time, but she is fed up with all these [moral] codes that get people to kill each other.

Scott Holleran: Yet you told the New York Times that Agora is “a very Christian film.” Why?

Alejandro Amenabar: It all depends on what we consider by being Christian. We see Hypatia being merciful and we see [the Christians] torturing her and [wanting to] skin her alive so in that sense I found that the character Hypatia is more Christian than those killing people. The movie’s not against Christians and Jews; it’s against fanatics. I don’t think Christians should be offended and I would feel ashamed if that happened. There were Christians and Moslems and Jews [working on the film’s production] and we insisted on that idea because offending them isn’t my intention. Some of the actors are very strong Christians and we openly discussed ideas while we were on the set. The problem is when people of faith start killing people who don’t have faith. Personally, I lost my faith when I did The Others [in 2001] and at the time I considered myself an agnostic. Now, I consider myself an atheist. That doesn’t mean I don’t identify with taking care of the people nobody wanted. So [in Agora] I tried to show that side of Christians—as good people.

Scott Holleran: What was the turning point?

Alejandro Amenabar: When I was doing The Sea Inside, I became aware [lead character] Ramon Sampedro [played by Javier Bardem] was an atheist. It’s not that I don’t want to believe and it’s not that I don’t want to believe in something superior or that I didn’t read the Old Testament or something. I prefer to call it nature. When Einstein was studying the theory of relativity, he was looking for something higher—but he was using reason. I try to do things from a humanistic approach. I do have a moral code but I know that you don’t have to live by the Ten Commandments to be a good person.

Scott Holleran: Is Hypatia a martyr?

Alejandro Amenabar: Yes. Again, I found links to her story and to the story of Jesus Christ. They were dragged through the streets, tortured and killed. We don’t know if she knew what was coming. The fact is that she was a woman who wanted to be treated as an equal to a man. She was very prominent in the city.

Scott Holleran: Agora’s marketing has been underwhelming; the film isn’t indexed on major online movie resources. Why isn’t Agora being promoted in the United States?

Alejandro Amenabar: It’s not an easy film. It looks like an epic film but it’s not a traditional epic. It’s about astronomy and it’s also this weird mixture of history and science—and you expect her to have an affair.

Scott Holleran: Have there been any threats from religious fundamentalists?

Alejandro Amenabar: Yes, though it hasn’t made all the money that it should. In Spain, it’s done very well and in Italy it’s doing very well but I don’t think it’s going to be a hit in the United States. We made the movie just before the financial crisis and in these times people just want comedy or horror or action. Agora is not that movie.

Scott Holleran: Some critics have said your film is strident. How do you respond?

I understand the criticism. It’s a movie that challenges the audience in terms of reasoning and trying to get into the story. I kept saying the movie is about astronomy and I wanted to express concepts that we study in school—science, mathematics—that don’t show how fascinating the topic is [the way the subjects are taught in modern education]. I wanted to translate [man’s] fascination with the pursuit of knowledge. I wanted to show astronomy and those who study it in the most appealing way. Those are the real heroes of the movie.

Scott Holleran: Has Agora been screened at the Vatican?

Alejandro Amenabar: Yes. From what I have heard, no one said anything. I think there were some priests and journalists there and there was no reaction at all.

Scott Holleran: Why was Agora submitted to the Vatican in the first place?

Alejandro Amenabar: It was the distribution company—I think they wanted to check the reaction of the Vatican and also for the translation into Italian [from English]. There’s one scene in which Cyril reads from St. Paul and [the Vatican] tried to look for the softest version. In the English version, it’s taken from the King James version of the Bible. But I don’t think there is a softer way of saying that women should shut up.

Scott Holleran: Do you think fundamentalists are corrupting Judeo-Christianity?

Scott Holleran: If a philosophy is good, shouldn’t it strive to be consistent?

Alejandro Amenabar: Yes. But [a good] philosophy has one principle and that’s that you can refute what your master taught you. Einstein’s biggest idol was Isaac Newton and he dared to refute Newton—he was able to come up with improved theories. Sometimes, you have to play against what your masters taught. Ptolemy was saying one thing [about astronomy] and Copernicus was brave enough to challenge him.

Scott Holleran: What is the theme of Agora?

Alejandro Amenabar: To me, it’s a difficult question. I always say it’s a story of a woman, a civilization, and a planet. I tried to see the earth in perspective. I tried to look at the earth as small—as small as possible.

Scott Holleran: Yes, you frequently pull the camera back to emphasize man’s smallness. Do you see man as small and insignificant?

Yes and, at the same time, as great—you see these highly developed people as small as ants knowing so much about the universe. So the movie shows man at his best and at his worst.

Scott Holleran: What is your personal favorite scene, as seen within the context of the final picture?

Alejandro Amenabar: There’s one shot that I love, when we see the earth as very, very little and you hear the screaming of the women and children—and we’re lost.

Scott Holleran: Which scene was hardest to shoot?

Alejandro Amenabar: The destruction of the library.

Scott Holleran: Why is it called Agora as against Hypatia?

Alejandro Amenabar: We thought about calling it Hypatia but people have problems with pronunciation [it’s pronounced hy-pay-shuh]. It’s probably different in every place and it’s not a beautiful name. That was one of the trickiest things. So, we said let’s call it the place where the old Greeks met and discussed ideas—this changed the world. Agora is the place where we all have to live.