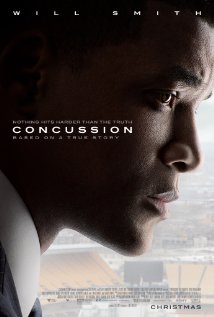 How the mind works, recalls and knows is the main theme of the alternately disturbing and stimulating Concussion starring Will Smith as the doctor who discovered chronic traumatic encephalopathy (CTE), the deadly condition caused by playing football. Sony‘s movie, which tries to bundle too much into the story, is imperfect. But it absorbingly depicts one man’s singular quest for knowledge and judgments which arguably ought to end football.

Concussion is anti-football strictly as facts allow. Smith’s Dr. Omalu, a pathologist in Pittsburgh, the industrial American city of champions in business, sports and medicine, eventually acknowledges what others regard as the beauty, grace and power of pigskin’s professional sport. But the film is about the effects of football, not an examination of what drives everyone to it.

The field play happens in game clips, conveying an essence of its brutal competition. But the characters play in Salvatore Totino’s gleaming photography, which captures Pittsburgh’s arenas, bridges, buildings, inclines and airplanes in the glory of glass and steel against green hills and gray skies.

Concussion‘s mind versus muscle clash in this ideal setting portrays a uniquely American contest—pitting the man who thinks against the man who refuses to think. Watching it is as gripping as watching a well done scoring drive.

In Will Smith’s characterization of coroner’s office neuropathologist Dr. Omalu, with fine supporting performances from Alec Baldwin and Albert Brooks, Concussion delivers what one character rightly calls “an American hero” who at his core seeks to end the killing of an innocent man. He is practicably spiritual in an almost Greek sense, though he goes to church, hangs crosses and speaks of God. This self-made African doctor who earned both a master’s degree and a medical degree in addition to getting his MBA from Pittsburgh’s Carnegie Mellon University is devoted to his chosen profession and reverential about practicing medicine in (pre-ObamaCare) America, which he tells another immigrant is the only nation where one is free to be the best.

Concussion‘s prolonged set-up begins with a patient zero, Pittsburgh Steelers‘ center Mike Webster (David Morse) the first of many tortured, diseased football players who are doomed to die from complications related to CTE, most by suicide. This figures uncomfortably and prominently into the forensics-driven plot, which dips and curves like the roads in Pittsburgh’s hills. When Omalu’s mentor, Cyril Wecht (Brooks in another excellent turn), backs Omalu’s investigation with the line that he never leaves a lead alone, adding that “that’s why people hate me”, it is both a piece of advice and a warning. Idiosyncratic Dr. Wecht encourages idiosyncratic Dr. Omalu to find romance, which blooms when a nurse (Gugu Mbatha-Raw) appears at church.

The good doctor embarks on the noble inquiry, based on a proprietary theory with the blessing of the seasoned sponsor, followed by a first dance and a first kiss in the doctor’s steady and messy pursuit of happiness. As he does, of course, having persuaded the best medical minds in Pittsburgh and that’s saying something, he faces the obstacle that Americans both fixate on and have faith in: football. The object of worship’s receptacle: the cartel—or is it monopoly—known as the National Football League (NFL). What Concussion does not show is the NFL’s affiliation with the shady sports press and other various conflicts of interest, but at least Concussion shows fans’ mindless complicity in the widely held gladiator spectacle—or is it slaughter—with pictures of people cheering as men pulverize one another. I don’t mean to sound sanctimonious. I used to do that, too.

Dr. Omalu, making his way to realizing the American Dream and blissfully single-minded about CTE after getting published and corroborating his theory to the point of missing that the Dream is barely alive, personifies that medicine is a serious, fact-based business which requires supreme autonomy—and, by contrast and implication, that football is the opposite. Players are used and discarded in a meat grinder that treats men as flesh made only of muscle, to hell with their minds. Dr. Omalu pushes on, explaining that man, unlike other animals, has no shock absorbers and cannot withstand the “unremitting storm of sub-concussive blows” without serious risk of injury.

Mike Webster received an estimated 70,000 of those blows. He ended up with the misery that’s peculiar to CTE. He was dead by the age of 50.

Concussion demands to know why. With writer and director Peter Landesman overusing closeups of eyes, heads and faces, this movie, which is based on a magazine article, expresses that to know is to live. The script and performances ardently add up to a powerful scene with Dr. Omalu standing before the players association as if he’s in a church—the church of pro football—experiencing something like a resurgence of man’s spirit. Concussion insists upon treating men as men and naming the consequences of either seeing the living as pawns in a game or as individuals with the right to life. None of this is obvious in the picture, which is neatly scored by James Newton Howard.

I grew up watching and playing football for fun and I was once a fan. I once waited for hours to meet the glorious Pittsburgh Steelers and get their autographs—I did and I’m glad I did—and I met the late Mike Webster and the late Dave Duerson (who is somewhat vilified here) and others depicted in Concussion. When chronic traumatic encephalopathy became known, the fun ended and I am no longer able to enjoy the sport. This was true long before this thoughtful movie was released. Despite having too much plot, religion and Sony’s requisite out of place product placement, Concussion does more than dramatize an argument against football. It dramatizes how to hold knowledge of existence—expressly for the advancement of man’s life on earth—above all fetishized and romanticized notions of sport, city and country. It never leaves facts alone. It asks the same of the audience.