While doing research for assignments related to a college in Los Angeles, I wanted to know the origin of the term ‘occidental’. I knew from my Oxford English Dictionary that the word means that which relates to the countries of the West.

So I asked Paul Anthony Jones, author of etymological guides and The Accidental Dictionary in the United Kingdom and creator of the language website Haggard Hawks. Kindly, he answered by e-mail, starting with a comparison of the words oriental and occidental, which he wrote has to do with the sun: “[E]tymologically orient comes from the Latin for ‘rise’ or ‘begin’, occident from the Latin for ‘set’ (or ‘fall down’). It’s the association between the location of rising and setting sun that permanently attached the words to the east and west…That gives the words some interesting and quite unexpected cousins. Orient is related to abort and origin, and probably even orchestra somewhere along the line. Occident, in the sense of a falling or setting, is related to incidents and coincidences, accidents, and deciduous trees, as well as all the words that end –cide, like patricide, fungicide and homicide.”

This word, occidental, is also the name of a small, private college in northeastern Los Angeles. 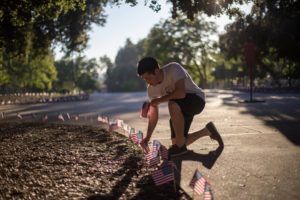 Occidental College is where an attack on a U.S. flag memorial was waged in three waves on this year’s 15th anniversary of the 9/11 Islamic terrorist attack on the United States. Alan Bliss, the sophomore pictured here who coordinated the besieged free speech exercise, tells me that he’s granting Occidental College the benefit of the doubt in protecting campus free speech despite the evidence to the contrary. The young Texan spoke with me in an exclusive interview on campus last fall. Read the story of his simple free speech exercise, its assault and destruction and the college’s appeasing response in my article here.

Occidental College is located in LA’s Eagle Rock neighborhood, where a wine lounge recently hosted a pair of Occidental professors for an enjoyable lesson on the Greek god Dionysus (read the article here), in which they discussed Plato, Aristotle, sparagmos, Alexander the Great, and why Dionysus is best regarded as more complex than the god of wine. The club’s lounge is owned by an Occidental graduate who chooses to host art exhibits, readings and lectures and other exercises of free speech at his Colorado Wine Company, located on Colorado Boulevard, a few miles from the hillside college.

As I ponder the word occidental as emanating from the setting sun and meaning that which pertains to the West, I must note that the college which sustained, and arguably minimizes, a siege against the freedom of speech, is where Barack Obama, the nation’s 44th president, Jack Kemp, the 1996 Republican vice-presidential nominee, Ben Affleck and director Terry Gilliam (Brazil) once studied. That this credible institution of higher education now claims (as a college spokesman told me for this article) that the school “doesn’t have the resources” to protect a student’s exercise of free speech—and, instead, seeks to coddle and appease its attackers—underscores the precarious state of the First Amendment.

Today, the 45th president vowed to strip citizenship of or imprison anyone exercising the right to free expression by burning a flag. More than before, the absolute right to express oneself, whether by burning or planting a flag, is crucial to the future of the West.