The Press Defies the State 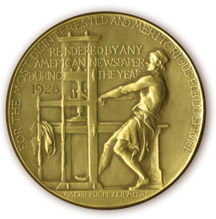 Though serving what is largely a symbol of pretentiousness, the Pulitzer Prize juries boldly defied the American government and awarded the highest prizes to those who reported facts disclosed by an American who worked for the government, defied the government, fled the country, heroically spoke against total government control and was deemed a traitor by the state.

The Washington Post won a Pulitzer Prize today for a series of stories that exposed the National Security Agency’s massive surveillance programs. An award also went to a team associated with the British-based Guardian newspaper, which also reported extensively about the NSA’s secret programs. The Guardian’s NSA articles are also based on classified documents leaked by Edward Snowden, the former government employee and contractor who fled to exile in Russia.

In a statement about the awards, the Jeff Bezos-owned Post‘s executive editor, Martin Baron, said today that the NSA reporting exposed a national policy “with profound implications for American citizens’ constitutional rights” and that “[d]isclosing the massive expansion of the NSA’s surveillance network absolutely was a public service…In constructing a surveillance system of breathtaking scope and intrusiveness, our government also sharply eroded individual privacy. All of this was done in secret, without public debate, and with clear weaknesses in oversight.”

But, as far as what barely remains of a free press is concerned, the best part of what Baron said is that, without reporting on Snowden’s disclosures:

We never would have known how far this country had shifted away from the rights of the individual in favor of state power.”

Today’s press is bullied, pressured and dominated by the state, and permeated by faith in either the dogma of statism or traditionalism, as evidenced by most of media including MSNBC and Fox News, a fact reflected by the worst part of what Baron’s statement says: “… As even the president has acknowledged, this is a conversation we need to have.”

The free press is not based on need and does not exist to have a conversation, though a conversation may be fostered and may occur, whether a conversation is acknowledged by the leader of the executive branch in a republic based on individual rights. By using the language of the Obama administration, which controls the government that has a monopoly on the use of force and has seized unprecedented power through unconstitutional means, the Post‘s editor undercut the truth of what he said – that individual rights are paramount. The press exists to express, report and speak in free exercise, but at least the editor identified, named and defended individual rights, he said it out loud, and he said it in defiance of a government that exhibits contempt for the rights of the individual, aims to destroy the nation based on this sacred ideal and seeks total power over every aspect of the individual’s life, liberty, property and pursuit of happiness.

The nation’s capital newspaper editor defied the nation’s government in explicit support of “the rights of the individual.” This fact, and the free exercise of press independence, is pure progress.