The Hong Kong protests are proving to be a catalyst in the conflict between Communist China and the United States. This week, Communist China’s dictator buckled and backed down by canceling the extradition law that sparked the current protest. The Communist puppet running Hong Kong is reportedly being purged by the Communist Party for failing to crush Hong Kong’s resistance. The protesters, who wave American flags, openly defy the dictates and sing songs of liberty from a Broadway musical, are gaining — not losing — support from all over the world.

Meanwhile, Communist China cracks down on its American appeasers, such as Apple, Blizzard, Google, Nike and the National Basketball Association (NBA), which punished professional basketball businessman Daryl Morey for exercising his right to free speech in support of Hong Kong’s protests, pressuring him to apologize for aiding Hong Kong.

Superficially, LeBron James and Shaquille O’Neal share similarities. Both athletes are extremely able, enduring and popular. Both men, who are black, faced serious challenges as boys. Although James is active and O’Neal is not, both sportsmen are Lakers—wealthy, high-profile men of achievement on a historic, dominant team, which originated in Minneapolis decades ago.

I do not follow, patronize or take serious interest in professional basketball. I’ve never been to a Lakers game and have no desire to attend. I’ve been to Staples Center in downtown LA where they play for my work, including covering the 2000 Democratic National Convention, and Kings hockey games, and I recently conducted research and interviews about basketball history for a book about the Munich 1972 Olympics basketball game that came out last month. So I wouldn’t call myself a sports fan. To the degree I follow professional sports, I prefer baseball. That said, I’ve taken an interest in both of these athletes.

The differences between Shaquille O’Neal and LeBron James reflect each man’s character. Following the controversy surrounding Morey’s single expression of free speech simply stating an individual’s choice to stand with Hong Kong against Communist China in favor of free Hong Kong, I think the gulf between James and O’Neal affords a profound contrast in moral virtue.

Simply put, LeBron James came out for Communist China. He did so plainly and without equivocation. He denounced Morey while traveling during Lakers’ competition in China and thus sanctioned the idea that the individual exists to serve the state.

James’s manner was irritable, frustrated and hostile. His statement was delivered at length without any sense of confidence, rationality or contemplation, let alone inner peace. James did not speak and act as if he had studied the issues and reached his own conclusion. He spoke and acted as though he resented the very idea that any individual should think or speak for himself, let alone about philosophy. In alignment with his self-chosen moniker, “King James”, he acted like a monarch — more exactly, and mirroring his sympathy for China, like an emperor without clothes — who believes he ought not to be bothered by his servants and subjects — as if as king he’s entitled to unearned adoration, any one who speaks that he’s wearing no clothes be damned. 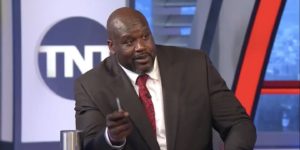 Shaquille O’Neal is like the child in the Hans Christian Andersen fairy tale. He spoke with confidence in his knowledge that Emperor “King James” wears no clothes. In alignment with his self-chosen moniker, Shaq, he spoke and acted as an accessible, thoughtful and intelligent man who presumes to speak only for himself. Shaq did this when he spoke up in defense of Morey’s exercise of free speech. Shaq neither wavered nor equivocated. He chose his words with purpose. He spoke with clarity and emphasis. Shaq did so in a proper context. Contrary to the annoyed demeanor displayed by James, Shaq spoke and acted with precision, eloquence and with the moral absolutism that he knows he’s right.

Life can be difficult and also wonderful and both Shaquille O’Neal and LeBron James have a wealth of experience on both counts. Tragically, Shaquille O’Neal lost his sister, Ayesha, who died of cancer after a three-year struggle at the age of 40 within hours after Shaq’s defense of Americanism. As far as I know, Shaq is in Orlando at this writing in grief with his mother and family.

But the 7-foot basketball star, whose distinguished career is probably best known for the sense of playfulness and joy that he brings to the game and to his perspective on the game, is now also known to be better equipped to cope with life’s greatest challenges. With millions of dollars in deals, opportunities and his job as a sports broadcaster on a network owned by AT&T at stake, when, disgracefully, neither the president nor the speaker of the House chooses to explicitly stand with Hong Kong on the proper principle, individual rights, this moral giant spoke for rights with much at risk to lose.

Shaq spoke as if his words matter — and they do. He exercised his right to free speech, knowing that, at any moment, he could be fired, punished and persecuted and he exercised his First Amendment right anyway. He showed the moral courage that Tim Cook and Apple, Blizzard, Nike, Google and the NBA have not. Shaq spoke like a man who owns himself, his ideas and his expressions.

James, on the other hand, spoke like a man who is owned by Others, the People’s Republic of China, a dictator or any and all of those, any one except himself. There is no single greater contrast I can think of in two men’s moral character than what happened in the last couple of weeks and on the defining political point of the moment — a conflict between what’s on the verge of becoming the most oppressive nation on earth and what remains, as Shaq suggests, the greatest nation on earth. Let there be no doubt that the man, who, as a broadcast journalist, is also an intellectual, who goes by the name Shaq is not merely morally superior to LeBron James.

James chose a course of action which is low, depraved, predictable, common and rotten — James did what most in his position probably would do under the circumstances of traveling in a dictatorship and working under the auspices of a league shackled by its deal with a dictatorship. Shaq chose the lonelier and more courageous, solitary, rational and enlightened course of action. This makes Shaquille O’Neal the greatest American alive right now — at least in terms of moral leadership — whose singular act of heroism, even as those claiming that their purpose on earth is to defend the rights of the individual remain silent, deserves every American’s standing ovation.

These are dark days for America, darker every day. The president, whatever his record, has no real grasp of rights and capitalism. The opposition is a band of socialists and statists who seek total government control of every one’s life and aim to impeach the president for trivial reasons with neither due process nor just cause for the sole sake of lust for power.

With his historic statement against Communist China for the ideal of free speech and the United States of America, Shaq showed a prime example of the highest moral action. Leonard Peikoff once said that to save the world is the simplest thing — all one has to do is think. Shaquille O’Neal did exactly that.

As Shaq once said:

For all my friends in the media who like quotes, mark this quote down. From this day on I’d like to be known as ‘The Big Aristotle’ because Aristotle once said: ‘Excellence is not a singular act; it’s a habit. You are what you repeatedly do.’”

Shaq’s excellence earns my deepest respect. By proclaiming that Houston Rockets businessman Morey is right to stand with Hong Kong for liberty, the Big Aristotle honors America’s philosophical forefather and lives up to his chosen nickname. Shaq’s is a powerful example of the spirit of 1776 when America needs it fast. Though the press wickedly chose not to cover his pathbreaking act of principle, Shaq’s political speech gave Americans the moral clarity and guidance they urgently need. The few who know it, including the protesters in Hong Kong, have reason to be newly invigorated and inspired not to let it go.