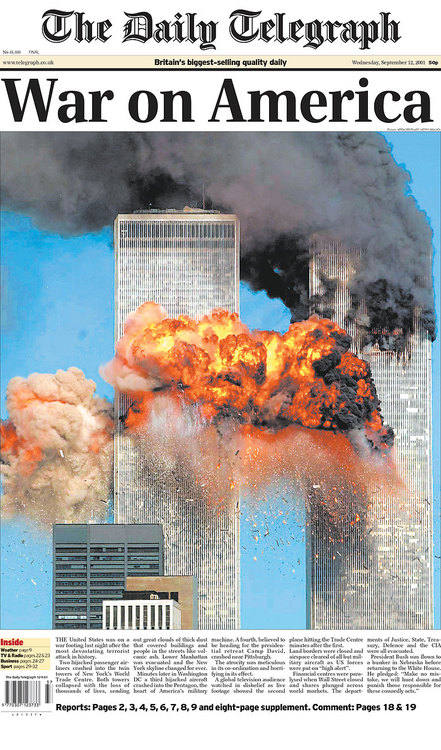 Eleven years after the worst attack in U.S. history, waged by Islamic terrorists, Iran is on the verge of acquiring nuclear weapons and is threatening to strike the United States, the anti-American president is refusing to meet with the prime minister of Israel over eradicating Iran’s threat, and today Islamicists assaulted our embassy in Egypt and reportedly have seized our consulate in Libya, where at least one person, possibly an American, has been murdered [9/12 update: during the jihadist mass murder, the ambassador suffocated to death and three staff members were shot to death].

In Egypt, the Moslems tore down the U.S. flag and replaced it with the black flag of Islam and its profession of faith: “There is no God but Allah and Mohammed is his messenger.” The 9/11/12 attack comes after the Obama administration aided, abetted and supported the current regimes of both North African countries – and a new report by military intelligence reporter Bill Gertz that Iran and Egypt are secretly meeting and may be collaborating as state sponsors of Islamic terrorism.

It ought to be obvious to anyone by now that America, economically crippled and evading the fact of war with Islamicism, is in deeply serious decline. No small part of the nation’s impending doom is the way we’ve responded to what is unfortunately known as 9/11, an act of war all but sponsored by states such as Iran and Saudi Arabia which was motivated by a religion (Islam), wrongly referred to as an event, a tragedy, or a series of attacks – it was an attack – and is not so much forgotten as ignored, evaded and unacknowledged. In all the reports I heard today on the 11th anniversary of what Leonard Peikoff rightly called Black Tuesday, not a single one mentioned what motivates the enemy: Islam. The word was never used. The attack, in which thousands of Americans were killed and wounded, our tallest towers were downed, our nation’s military defense was penetrated and aviation and stock trading were halted, merely left us barreling toward a fascist state in which government controls one’s every action, more vulnerable to attack by jihadists (to whom we apologize, as the U.S. did in today’s disgusting statement condemning free speech, available here, in response to the attack in Egypt) and we are heading for extinction.

Before he died, John David Lewis warned in our interview about his book on war, Nothing Less Than Victory, that our future is in grave danger. He spoke of both foreign and domestic threats and the rising threat of an Islamic axis. In his new book, The DIM Hypothesis, released this week, Leonard Peikoff presents his thoughts on our future, why our prospects are bleak and how our doom might be prevented. But today is another ominous, dark reminder that men of reason are losing the war against those of faith and we are losing fast. We are losing the war, losing capitalism and losing our rights. Losing our lives, on a massive scale at the hands of our enemies here and abroad, surely cannot be far behind. As Dr. Peikoff argues for philosophical integration, the few of us left to fight for reason, rights and reality must stand tall against all that’s against us. Let Black Tuesday serve as an annual reminder that our time to right what’s wrong is finite, our cause is just and we must prevail. Remember what our fallen American heroes said 11 years ago today, as the plane went down: “Let’s roll.”