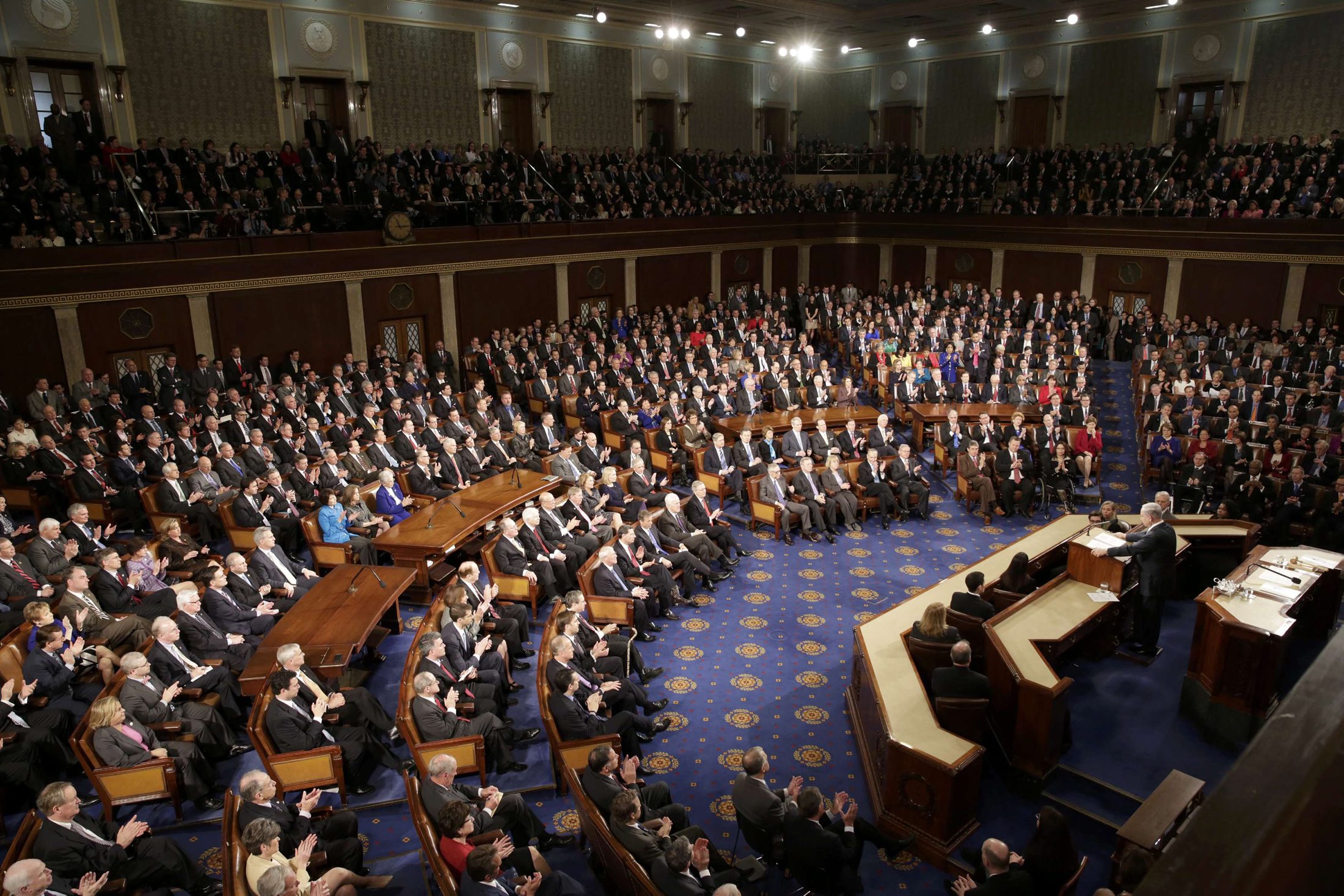 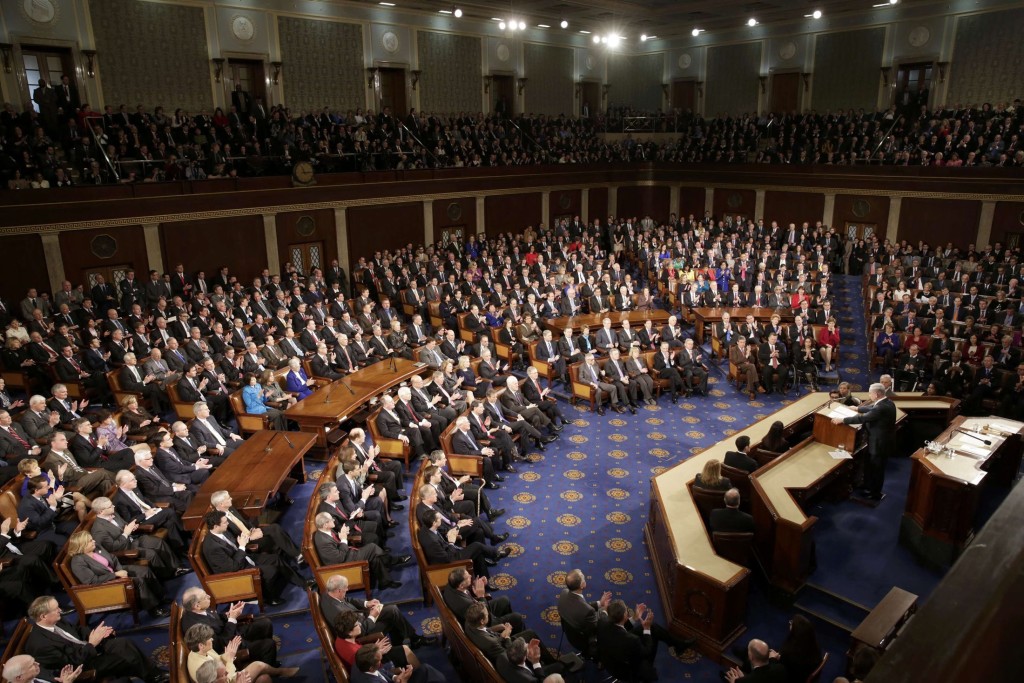 Despite an unprecedented smear campaign by the Obama administration against an American ally, Benjamin Netanyahu, the prime minister of Israel, addressed a joint meeting of Congress tonight. He entered the U.S. Capitol to a round of thundering applause.

Netanyahu, as everyone knows by now, came to Congress to warn America about its arch-enemy, states that sponsor Islamic terrorism and, in particular, Iran, with whom the Obama administration is horrifyingly negotiating on the question of nuclear capability.

Addressing himself plainly to members of both houses of Congress, which he correctly called “the most important legislative body in the world,” he brilliantly challenged the United States of America in the deepest sense, both its people and its government. Contrasting the U.S. founding political philosophy, Netanyahu referred to Iran as the agent of “death, tyranny and the pursuit of jihad,” which it is. And, in case a member of Congress forgot, he made an impeccable case based upon facts throughout history, from mass murdered American Marines in Beirut to an act of war against Saudi Arabia in Washington, DC, that Iran and Islamic State fighters compete “for the crown of militant Islam”, which he described as a “game of thrones.”

This line is an appeal to intellectual Americans, the types that watch premium paid television programming, to stop obsessing over TV shows and start thinking more seriously about life and the facts of reality. He cashed in on that line when he concluded that “when it comes to Iran and ISIS, the enemy of your enemy—is your enemy.” By now, it should be obvious that America is at war with savages and that any deal with an Islamic barbarian state such as Iran is not just a bad deal but “a very bad deal”, as he put it. But Americans have gone soft and, on this topic, it is true, starting with the most intellectual Americans. He came with these simple words and short sentences to evoke their precious pop culture and apply it to real, everyday issues of life and death.

He mentioned the Bible’s Moses, too, urging Americans to be strong and resolute and to neither fear nor dread the enemy. If popular mythology doesn’t convince anyone, he compared today’s jihad to the West’s ignorance and evasion of the single worst act of mass extermination in history and pointed to Elie Wiesel as a strong and noble presence in the House of Representatives. He pointed to Iran’s systematic subjugation and persecution of gays, women and journalists. He pointed to North Korea, which got the nuclear bomb after endless negotiation by the Clinton, Bush and Obama administrations, as evidence that the same result can be expected of Iran. He pointed to Secretary of State John Kerry’s admission that Iran may end up with a massive nuclear capacity when Obama’s deal expires in 10 years.

“Now I want you to think about that,” Netanyahu said. “The foremost sponsor of global terrorism could be weeks away from having enough enriched uranium for an entire arsenal of nuclear weapons and this with full international legitimacy…That’s why this deal is so bad. It doesn’t block Iran’s path to the bomb; it paves Iran’s path to the bomb.”

I first warned that Iran is America’s foremost enemy in an op-ed I wrote, which was published in newspapers nationwide in 2002, the year I first attended a speech by Benjamin Netanyahu. It was an event in Century City organized by a group called Jews in crisis and it was attended by Jews and others, including myself, an atheist, and an Arab friend, as I wrote about here. Thirteen years after warning against Iran, the Islamic dictatorship is rapidly becoming a nuclearized Islamic dictatorship, alarmingly at the concession and appeasement of the United States. This is why Netanyahu’s final point, that Israel reserves the right to act in its own defense—he said that “[e]ven if Israel has to stand alone, Israel will stand”—may miss the point.

Netanyahu said that he knows that “America stands with Israel”.

Is this true—and how does he know it? Prime Minister Netanyahu spoke in Hebrew and talked of God, Moses and the Promised Land. This may be a grave mistake. Most every argument in Netanyahu’s speech used logic and reason until the end, when he made vague, flimsy references to the strength of a relationship which is weakening. America barely supported Israel when it was created in 1948 and, from Eisenhower at the Suez Canal to Reagan’s insistence that Israel release hundreds of terrorists, America is charting a course for mass death and total self-destruction which is deeply rooted in its abandonment of Israel. This is most especially true with regard to America’s denunciation of Israel’s July 4, 1976, raid on the Arab terrorist-hijacked airport at Entebbe, in which Benjamin Netanyahu’s brother Jonathan was killed while liberating his fellow countrymen in what may be the single greatest act of retaliation against terrorism in the 20th, which is currently the bloodiest, century. Yes, the glorious raid on Entebbe was denounced by America almost 40 years ago.

Mr. Netanyahu, whose otherwise excellent speech makes an unassailable case as it is, ought to know better. America cannot be saved by the leader of our allied state of Israel, though Netanyahu is right and Congress should stop Obama from dealing with Iran. America must be saved by Americans. The problem is that Americans don’t think, or know how to think and articulate, that America is worth saving, let alone understand why. I want Netanyahu’s warning to have an impact this time. Unfortunately, I doubt that it will.