U.S. Agrees Not to Raid Mosques in Afghanistan 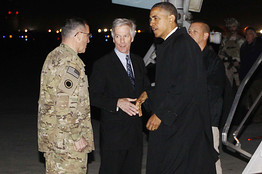 Contrary to the president’s 2012 announcement during a nationally televised address of a pullout from Afghanistan, the Obama administration agreed to keep 9,800 U.S. troops in the country, adding $16 billion in aid and ceding to the new Afghan government control of troops’ and military contractors’ actions.

The U.S., is not, for example, allowed to raid mosques “or other sacred sites”, according to a report in today’s New York Times.

The Obama administration explicitly rejects the idea that acting in one’s self-interest is virtuous. In a White House statement, the U.S. government refused to acknowledge national interest as a legitimate concept while heralding helping others while putting mosques and sites deemed “sacred” by Afghanistan off-limits to U.S. military action:

[W]e look forward to working with [Afghanistan’s] new government to cement an enduring partnership that strengthens Afghan sovereignty, stability, unity, and prosperity, and that contributes to our shared goal of defeating Al Qaeda and its extremist affiliates.”

Note its use of the word shared.

This means that any goal, whether defeating an enemy combatant or treating infectious disease, must be shared by all Americans with the entire world. Naming how a goal affects U.S. national interest, let alone whether the goal advances U.S. national interest, is out of the question; executing an action in the nation’s interest is anathema to the United States government. Altruism, the idea that one’s highest moral duty is to serve others, is instead practiced to the extreme. The White House statement makes clear that defeating Islamic terrorists, unnamed as Islamic terrorists, is legitimate only if it helps others, especially Moslems.

This, of course, continues the George W. Bush administration’s fundamental foreign and domestic policy of helping others. Whether ordering Marines to stand down at Fallujah in 2004 or expanding Medicare, Bush, like Obama, chronically praises what moves the enemy, Islam, as a “religion of peace”, pledges to help others and expand the welfare state at the cost of adding trillions of dollars to the debt.

There once was a legitimate claim after 9/11 that a military attack on the Taliban in Afghanistan, however puny and insignificant in ending states that sponsor terrorism, is in America’s interest. Now the very idea of America’s interest is forbidden in Washington. Under Obama, only more so.

So, it should be obvious that Obama lied when he pledged to pull U.S. troops out of Afghanistan. It should also be clear that the lie is based on a basic intent to change and thereby destroy the nation’s fundamental principle that the individual has the right to pursue one’s happiness for one’s own sake.

Afghanistan’s new leader promised that the pact will “open the doors for a continuation of civilian and [U.S.] military aid.”

What’s in the pact for Americans? Nothing, and everything that this implies.

The true answer to this variation on the much-maligned question “what’s in it for me?” ultimately redounds to catastrophe and mass extermination, as Leonard Peikoff repeatedly warns. A pact with a nation in which we are precluded from raiding buidings where the enemy stores weapons and houses soldiers of God in its jihad against America is a suicide pact. As the Taliban, which was invited by the new Afghan president for peace talks, said in its succinct response to the pact: “Death to America”. This is precisely what the U.S. gets from Obama’s new deal.