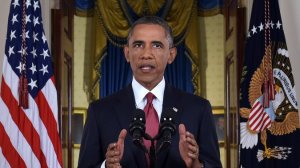 President Barack Obama addressed the weakened, fractured nation on the eve of another unavenged September 11th in a short, televised speech announcing new U.S. military involvement against Islamic terrorists in the nation formerly known as Iraq.

Obama, who has lied many times on foreign and domestic policy, has zero credibility, however. Nothing the president says should be taken as honest and forthright. As far as I’m concerned, the man who ran for president on the premise that he would pull U.S. troops out of Iraq and end the Bush administration’s military intervention in 2008 is utterly unfit for command. When he pledges that under his command America will “degrade and destroy” our enemies, what he means is the opposite. Almost every action he has taken in his two terms as president is deliberately designed to degrade the founding ideals of the United States and destroy what America means in theory and in practice. Obama is, as I once wrote, the Nothing Man. He is diametrically opposed to the fundamental founding principle of the country, individual rights, and he seeks to destroy the nation.

That our war against Islamic states that sponsor terrorism is a disaster which has never been properly declared, waged and/or fought is no reason to support the president and take his word for rational action in self-defense. Of course, America should destroy the enemy, which has been allowed to gather and attack. But Obama cannot be trusted to do it under any circumstances and the facts of reality have proven this time and again.

This does not stop conservatives such as Newt Gingrich from supporting the President, as Gingrich and others, such as David Gergen, rushed to do tonight on CNN. “We’ve had 13 years of trying to defeat the enemy” CNN’s Gingrich said after listening to the speech and describing it as “very good”.

Gingrich is wrong. America has not had 13 years of trying to defeat the enemy. America has had 13 years of not trying to defeat the enemy. In other words, we’ve actually had 13 years of appeasing the enemy, by not bombing mosques when we knew they contained enemy chieftains, combatants and weapons, for instance, by ordering Marines to stand down at Fallujah, as President Bush did, and by refusing to end states that sponsor terrorism. The fact is that the Islamic jihad is an immediate threat to the United States and so is the president of the United States.