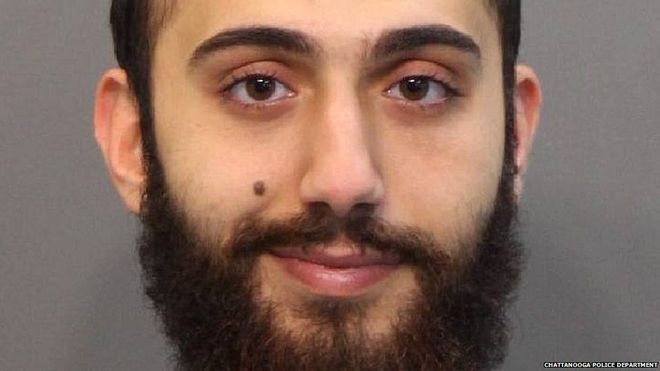 The night before an Islamic terrorist (pictured) gunned down five enlisted members of the U.S. Navy and Marines in Tennessee, he sent a religious message on “declaring war”, according to Reuters. Yet the government says that the murderer’s motives are still being investigated. This evasion of reality—that America is at war with radicals motivated by religion—is why America is losing the war.

While local, state and federal government police, and their co-conspirators in the press, continue to spend time and money denying what is obvious to most Americans, refusing even to utter the words Islamic or terrorism, Reuters and the New York Times report that they have seen a text message sent by the Islamic terrorist the night before to a friend linking to a passage from the Koran, containing the verse: “Whosoever shows enmity to a friend of Mine, I will indeed declare war against him.” The full text is:

Reuters also reports that the terrorist, returning from a trip to Jordan last year, had purchased three guns online following the visit and used them for target practice. Navy logistics specialist Randall Smith became the latest victim when he died of his wounds in addition to the four Marines who were murdered at the scene of Thursday’s shooting in Chattanooga, Tennessee. The 24-year-old Arab terrorist had posted on his blog urging readers to “submit to Allah”. Yet a spokesman for the FBI said: “It would be premature to speculate on exactly why the [Islamic terrorist] did what he did.” The shooter was heavily armed and wore an ammo vest, according to officials, when he rented a Ford Mustang convertible and drove to two U.S. military centers to carry out the assault. He had been a naturalized U.S. citizen, college student and an active, attendant and observant Moslem at the local Chattanooga mosque.

But the U.S. government failed, once again, despite its claims that indiscriminate mass spying on Americans increases national security, to protect Americans. As in Texas, Massachusetts, the U.S. consulate at Benghazi, New York City, Washington, DC and countless other American places going back decades, the American government failed in both security intelligence and military defense of the nation. This is not to mention every American attacked or murdered by Moslem terrorists from the Marines in Beirut in 1983, Americans in passenger jets, discos, bookstores, cruise ships and minivans or the thousands lost to appeasing rules of engagement that favor the enemy in Iraq, Afghanistan and anywhere the U.S. military engages the enemy. With the Obama administration pushing its death pact with Islamic enemy Iran, which vows to destroy the West and the U.S., the evidence that America is losing the war is impossible to ignore.

Many historians, scholars and analysts have argued for decades that the jihadist enemy seeks to conquer the U.S. and force Americans to change from a free society to a silent submission to Islam and there is already staggering evidence that this is becoming true, from the way 9/11 has become a day of national mourning with no mention of the cause of the attack to the media’s, government’s and intellectuals’ refusal to name Islam as the ideology that motivates the terrorists to attack. The state of government control being enacted with the NSA, ObamaCare and the TSA propels the inversion of government’s proper role; the more the state does what it shouldn’t do, the less it does what it should do—its highest function is to defend the nation—and the threat of Islamic terrorist attack grows worse and larger with every expansion of government control. The nation is in a downward spiral.

The attack on Chattanooga is a perfect example. More Americans choose to remain silent in the wake of instant vilification of anyone who expresses a viewpoint which diverges from the status quo or they’re afraid of targeted terrorist strikes against individuals who speak out. Among those who do denounce the attack, the proposed solution, especially by conservatives, is arming military members at recruitment centers and giving more military authority to the National Guard. This leads to a greater risk of America becoming a police state. Without the will to name Islam as the enemy’s ideology, all the armed soldiers and police in the United States won’t stop an enemy’s nuclear bomb, not with the nuclear treaty that all but grants Iran the right to make and use the weapons to attack. Increased arms and militarization of police, military recruitment of civilians and the National Guard will hurt, not help, America’s ability to pull out of the spiral.

What helps the United States of America is the pledge of each American to honor fallen, fellow Americans, from Leon Klinghoffer, Daniel Pearl and the passengers of United Flight 93—who said “Let’s roll”—to United States Marines Gunnery Sgt. Thomas Sullivan, Staff Sgt. David Wyatt, Sgt. Carson Holmquist, Lance Cpl. Squire Wells and U.S. Navy logistics specialist Randall Smith (read about them here). Today’s spiral means that every time an Islamic terrorist attacks America, the government denies, dodges or evades that it’s an act of Islamic terrorism, the media equivocates, rationalizes and asks why the terrorist went bad and the loudest intellectuals blame America while politicians on both the left and the right enact new laws that violate individual rights while losing the war with those motivated by Islam.

Pulling out of today’s death spiral for good requires the effort of every decent American and those who cherish Western civilization to learn the lessons of the savage attack in the volunteer state. I say to each American: choose a different course of action, including activism. Defend your life. Shove off the incessant push to rationalize and evade what motivates barbaric attacks by religious soldiers. Never mind the noise about why the Moslem hates America. Concern yourself with what the individual ought to love about America. Reject the false narrative about what radicalizes others. Learn what you ought to know about speaking up to defend yourself and get to it: radicalize thyself.