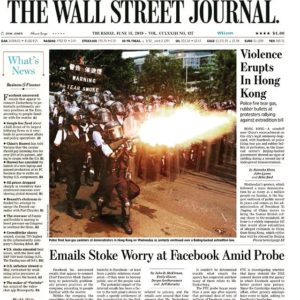 Hong Kong’s rejection of Communist China’s extradition rule and the governance of Communist China puppet ruler Carrie Lam is an unsurprising recent development. With its British colonial history, Hong Kong has been an outpost of Western civilization in the Orient; an Occidentalist center for trading food, especially seafood, goods and services bridging east and west. Much of the city’s population went along with Britain’s adherence to a pre-Communist agreement to return Hong Kong to China in 1997, which Leonard Peikoff once observed may have been influenced by Reagan’s refusal to back Thatcher’s withdrawal or refusal to recognize the agreement on the grounds that its terms were voided by dictatorship.

Hong Kong’s cosmopolitanism and independence endures. From freedom fighter and activist Joshua Wong to millions waving American flags and uniting to sing “Do You Hear the People Sing?” from the Broadway musical version of Victor Hugo’s Les Miserables, Hong Kong yearns to be free, not ruled by the government that cracks down as I write this.

Privately, I’ve supported China’s liberalization to make progress toward capitalism. But I am proud to have never endorsed, let alone romanticized, the People’s Republic of China. This is true from my newspaper commentary calling for Bush’s secretary of state, the utterly incompetent Colin Powell, who is one of America’s worst military leaders and statesmen, to resign over his appeasement of China’s refusal to return a U.S. military crew and plane to my denunciation of China’s sponsorship of sporting spectacles. I think too many, including businesses such as Apple, artists and Objectivist speakers, and, of course, elected politicians, coddle, appease or ignore Communist China. It is in this sense that I think President Trump is right to oppose China.

I am not a foreign policy thinker, though I’ve covered China in my writing and journalism. I am not a war, military or other type of historian. I do not study Asian history or military strategy for a living. I am certainly not an economist. I’ve read some books about the relevant topics. I’ve taken some courses. And I study philosophy. So, I recognize the implications of China’s threat to the West. Currently, I follow a range of several thinkers, commentators and scholars, including, in the past, the late John David Lewis, the forementioned philosopher Dr. Peikoff and Gordon Chang, among others. Accordingly, with Trump’s tariffs and trade war and Hong Kong as a potential flashpoint, I think China is in some sort of internal turmoil and poses a serious danger to the West. China recently allied with North Korea, a Stalinist state threatening nuclear attack on the U.S. and invasion of South Korea, which is currently governed by an anti-American who recently reneged on an agreement to share intelligence with Japan.

The U.S. has tens of thousands of troops in South Korea and not merely to protect that country, which, like Taiwan, Japan, Southeast Asia, Australia and U.S. Pacific territories and states, is crucial to sustaining America. China’s militarism, coddled by Nixon, Reagan, Bush, Clinton, Bush and Obama, including its advancement on the South China Sea, like its ally Islamic Iran, is dangerous. This is to say nothing of China’s constant attacks on Americans’ property. To his credit, and I am among the first to critique the nation’s president, before he was elected president and before bashing him became an American cultural fixation and leftist dogma, Donald Trump’s is the first American government to stand up to China. Whatever Trump’s motives, mistakes and complete lack of principles, and whatever the ominous signs of what his presidency and its often mindless following means, Trump on China is a step in the right direction.

For the first time in America’s modern history, and this goes to the issue of America’s future and retaining or reconstructing what makes America great, the United States acts primarily in the interest of the United States with regard to China. Mine is not an endorsement of tariffs in general or in specific. I disagree with most of what Trump thinks, including his positions on Snowden, the surveillance state and health care as a right, to name a few. I’ve said so and under my own name. But I think his standing up to China, if and to the degree he does, is important, possibly crucial, and good. If progress means advancement of civilized humankind with living on earth as the standard and I think it does, Trump on China in terms of demanding certain terms and conditions for trade and military policy, is progressive.

This brings me to Trump’s detractors, the so-called ‘progressives’ running for president.

The 2020 Democrats are a band of goons, thugs and loons. Democrats want to rob Americans for slavery reparations. Nearly every Democratic Party presidential candidate seeks to ban, control or dictate property, livelihoods, medicine, exercise of speech and cars. Many endorse socialism, socialized medicine and fascism. The frontrunner says he wants to dictate the automotive industry and force Americans to drive electrical cars. One candidate seeks to impose a national collective income. The same candidate plans to install gigantic mirrors in outer space to fight the sun’s rays in the name of opposing a change in earth’s climate, which Democrats believe is a kind of apocalypse caused by humanity. Every Democrat running for president seeks total government control of the medical profession. Even an otherwise reasonable candidate such as South Bend, Indiana’s mayor, Pete Buttigieg, has come out for slavery reparations.

This fact alone makes Trump’s re-election more plausible and, while I didn’t support Trump in 2016 and actively spoke out against and oppose his protectionism and other anti-capitalism, I am willing to consider voting for the ex-Democrat as against a candidate who supports socialism, opposes pure capitalism and pledges to violate my right to speech, association and life to ban my car and confiscate my property for slavery reparations, a national income and socialized medicine, college tuition and whatever other lunacy they have in mind.

The premise of the Democrats’ totalitarian environmentalism and socialism is altruism. Why would you trust one who explicitly opposes egoism to defend the United States of America? Trump is bad, terribly anti-intellectual, and it’s true that he’s an authoritarian at least in psychological terms. However vulgar, nationalistic and anti-capitalist his presidency, which is marginally better than I forecast, he’s looking better than the alternative, each of whom shares the same moral premise and economic ideal as China.

As the West watches the world’s danger zones — Venezuela, Cuba, Sudan, Yemen, Israel, Seoul, Kashmir, Kabul, Taiwan, the Sea of Japan, Straits of Hormuz and South China Sea — especially Hong Kong, which once not long ago granted refuge to an American who defied the Obama administration to challenge the status quo and cripple the surveillance state, whose citizens seek to live in liberty, I think it’s important to stand up to China. For the first time in my life, the American president (an anti-intellectual made possible by his thoroughly anti-American predecessor) does.