Bush’s Stunt at the End of Iraq

The disintegration of the U.S. government from the people is perfectly embodied by one of the worst American presidents, George Bush (the 41st commander-in-chief), who chose the occasion of both the looming takeover of Iraq by Islamic fundamentalists and the abnegation of U.S. veterans’ health care by the government to jump from an airplane for the eighth time to celebrate his birthday.

It is one of the most shameful acts by a former president in history. 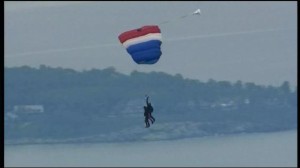 Long, aimless wars in Iraq were set in motion by this Bush. The war for the sake of helping others, waged by his son, George W. Bush, upon the invasion of Iraq after 9/11, would not have been possible without his – and Norman Schwarzkopf’s and Colin Powell’s – unfocused, unfinished and totally unselfish military policy. Neither would the emerging Iraqi massacre and Islamic caliphate or thousands of murdered, maimed and, fundamentally, sacrificed American soldiers, generations of whom are lying in pain and agony without limbs, livelihoods or medicine thanks to the Veterans Administration’s systematic plan to allow them to be sick without treatment and die. Neither, frankly, would the monstrous Barack Obama, who (with whomever is helping him) presides over and coordinates the end of America.

The end of Iraq is happening as I write this and it started in earnest with George Herbert Walker Bush, though I know it started before Bush. That the president who goes by a number would with supreme narcissism pull a publicity stunt when men and women of the military face horrifying injustice is contemptible. The 41st president bears responsibility for the 20th century’s worst U.S. riots, massive new taxes, government controls and dictates, wrong wars and the worst act of war in U.S. history, so he should already be remembered for hastening America’s demise.

But he is also a forefather of U.S. appeasement of Islamic fundamentalism and Iraq’s takeover by jihadists. Of course, he fathered (philosophically, not just ancestrally) the welfare-statist 43rd president who made Obama possible. In fact, this skyjumping Bush is singularly more responsible for the horror of what we are about to witness – the rising Islamic Iraqi state – than any other person in history. When he ought to have been apologizing to Americans, especially to the brave soldiers and those who survive the dead, for the tax increases, bad laws and wars with no purpose, victory or national interest, Bush chose to publicize himself for the sake of a temporary thrill.

That Bush’s stunt happened under colors of a flag that represents the freedom fought for by soldiers he sent to be slaughtered for nothing, as Iraq and other war veterans now lie writhing in misery, dying while waiting for health care – while Americans flee for their lives from Iraq as it succumbs to Islamo-fascism and the U.S. slips into further decline – is America’s foremost example of presidential hubris.