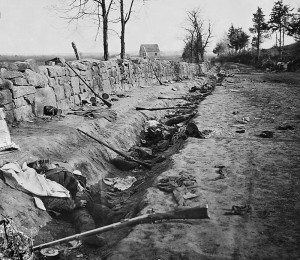 Part of this year’s American Civil War exhibit, “Empire & Liberty: Civil War and the West”, at the Autry National Center of the American West includes an occasional academic affair and I recently attended such a panel discussion, titled “Invisible Injuries: Civil War Veterans and the Legacies of Violence.” The event was informative and sobering.

Two scholars, Dora Costa, a UCLA professor of economics and author of Heroes and Cowards: The Social Face of War and Roxane Cohen, a University of California, Irvine psychology and social behavior professor, and moderator William Deverell, director of the Huntington-USC Institute on California and the West, examined several aspects of recent studies about Civil War soldiers, including certain demographic and relational breakdowns, injuries and deaths.

They addressed their research into war-related trauma among Civil War veterans and their communities and the long-term psychological consequences of the war. Among their findings, which readers can explore here, are that 19 percent of enlisted soldiers in the study were between the ages of nine and 17 years old. I had known from my education and studies with John David Lewis that those who fought in the war were especially young. I had not known, however, that 95 percent of those enlisted were volunteers, more than any other war since the American Revolution. The presentation gave me a sense of life the United States at the time of the Civil War while demonstrating that the long-term effects of war on communities, states, countries and the culture are serious, devastating and transformative, if realized decades later.

Their resarch shows that unit cohesion, such as how many in the company were related by blood, similar age, community, ethnicity, etc. and/or how closely soldiers related to one another as friends and comrades, enhanced a soldier’s ability to heal and survive. Another positive impact apparently came from strong social network support, such as moral support through picnics and parades, which had measurable improvement on mens’ ability to survive and sustain injury after the war. Even celebrations around Christmastime and Thanksgiving correlate to mens’ higher survival rates and longer lives. Scholars also explained that companies were constructed differently; the Union companies were kept largely intact, while the Confederacy constantly replenished its company troops on the idea that new recruits would motivate the men to learn to fight.

Additionally, Costa attributes the rise of trench warfare to the huge proliferation following the Napoleonic Wars of small arms. When I asked her about survivability rates among abolitionists that enlisted—survivability rates were highest among deserters and free black men in the Union Army who were not assigned to fight in battle as often—Costa said they died in greater numbers because abolitionists were more motivated to fight to win and end the war to abolish slavery, which the Civil War did, in fact, accomplish. This was a fascinating program, part of the Autry’s “Empire & Liberty: Civil War and the West”, which I plan to review in a future post.