Why Hollywood’s Finally Got a Hit

The worst summer at the box office in decades finally closes with a record-breaking hit in a new adaptation of an Eighties novel by horror writer Stephen King. The movie’s titled after the bestselling book, It. The Warner Bros. picture stars Jaeden Lieberher (Aloha, Midnight Special, St. Vincent) as the leader of a group of bullied children who are terrorized by a clown, and, this weekend, It smashed records in several categories, including an opening day beating of Marvel’s recent hit Deadpool. Why It is a hit is as simple as ever; audiences figured It looked like a good movie. 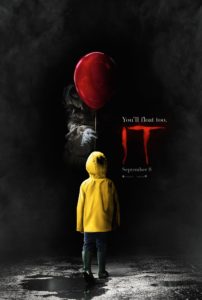 And It is a good movie (read my review here) if a clear, coherent and character-based plot’s the standard for what makes a movie good. Not every good movie’s a hit, let alone a records-breaker, and, of course, not every hit’s a good movie. This summer’s dismal returns suggest a confluence of factors for declining box office trends. When it comes to seeing movies, people are more savvy about oversaturated marketing and advertising, more discriminating with their dollars and there are many more sources for discernment, for starters. There are more sources for entertainment, too, and, with rising cable prices and lower quality service and control of choices, streaming is growing as an option.

Today’s consumer has a wide range of choices in not only creative material but also the format for seeing the material — streaming a movie or TV show or listening to a book being read on a tablet, watching a Blu-Ray or DVD or seeing a classic movie or show via a variety of free, pay and subscriber models — and the range is both exhausting and daunting. An invitation to accept a clear-cut value proposition such as It‘s promise to deliver a coherent blend of character-based humor, plot and frights in the movie theater makes the choice easier: come to the theater and you’ll be scared, humored and entertained. That’s the appeal of It in a nutshell. Weekend receipts indicate that word of mouth was apparently better than decent. It blew past the summer’s overrated hit Wonder Woman.

But an article by Brooks Barnes in last week’s New York Times about an aggregator website co-owned by movie studios, to the extent they’re still studios, points to trouble for Hollywood movies in the future. The popular site, founded by Berkeley college students who named it Rotten Tomatoes, evoking the medieval practice of mobs physically assaulting criminals (which the Times reports spread to theaters and pelting artists with tomatoes in the 19th century), purports to rate movies based on an aggregate of numerous reviews.

Now, the studios that bought the site blame the site for poor box office results.

There is some truth in the claim. Audiences tend to stay away from movies with low ratings, which are decided by a committee of the site’s employees at an office in Beverly Hills. A 36-person bunch, who report to a former studio executive at a company partly owned by a unit of NBCUniversal, which owns MSNBC, NBC News and Universal Pictures which is itself owned by Comcast, the cable TV cartel, decides numerical ratings. The site’s senior “editor” sports a pink mohawk and dresses up as a comic book character at events the site sponsors in which audiences and movie critics are squared off in a confrontational contest. Rotten Tomatoes calls these events Your Opinion Sucks. The site’s “editor”, Barnes writes, was in charge of three such “sessions” at this summer’s Comic-Con. “Let’s just say that it’s not an accident that I chose a costume that needs a whip,” the Rotten Tomatoes senior movie “editor” quipped in a Catwoman costume.

This is the caliber of operations that studios, which the article admits game the movie review system with pre-release screenings of carefully selected critics deemed more likely to write a positive review of a given film, both condone and condemn. Not that it’s possible to rely on ratings by committees that (claim they) skim or read reviews and then put numerical values on them to choose which movie to see. Rotten Tomatoes, for its part, told Barnes that it aggregates a diversity of reviews because “critics at traditional outlets tended to be white men” and “Rotten Tomatoes wanted to include female and minority voices.” Try to numerically factor that, RogerEbert.com.

As Barnes reports, Americans increasingly use aggregated reviews from sources such as Rotten Tomatoes, Amazon, Yelp and TripAdvisor to make decisions on whether and what to buy. According to an entertainment industry consulting firm, 34 percent of U.S. teenagers consult Rotten Tomatoes before buying a movie ticket, an increase from 23 percent a few years ago. But he wrongly concludes that this rotten chicken coming home to roost represents a “battle between movie companies and critics.”

Going by what other people think of what other people think of other people’s reviews is not a conflict between the Hollywood moviemaker and movie reviewer. It’s the oldest, laziest form of conformity and it’s a byproduct of the mass dumbing down of American culture — the refusal to read, think and form a judgment based on the thoughts of one’s own reasoning mind — and this groupthink, rule by consensus or mob rule poses the gravest threat to Hollywood, movies and the culture. Whatever its merits, despite the fact that its audience may have been drawn by the groupthink, too, though I am more optimistic than that, at least It appears to have earned its audience based on the promise of a good movie, not by the allure of an arbitrary number picked by a band of bean-counters in Beverly Hills. On the other hand, It, a horror movie which also gains from the theme that deep-seated fear can be conquered, was made by a movie studio that also owns part of that popular and meaningless website.