Fox News (which, at its best, is better than its competition, though CNN is making improvements) continues its decline. With more piffle on the air in its prime time lineup, more self-aggrandizing segments and more of the same style over substance in shows, guests and topics, the 17-year-old channel’s programming is less informative than ever. The newest addition, a piddling piece of fluff titled The Kelly File, went blank for an hour in its awful premiere last night and wound up with less value to offer than an episode of Three’s Company. At least that vacuous ABC comedy didn’t pretend to be anything decent or satisfying, just an excuse to ogle well-endowed women and chuckle at bawdy jokes, the Ropers or Mr. Furley.

Fox News’ newest darling, Megyn Kelly, whom they’ve been breathlessly grooming and promoting for years now, is another cable television blonde with a law degree and not much else. In other words, she’s like Chrissy from Three’s Company but not as thoughtful. At least dim Chrissy tried to make sense of the world around her. Ms. Kelly, who’s been at her best in fragmented legal segments when she’s pitted against the network’s chief personality, Bill O’Reilly, in his lead-in The O’Reilly Factor, doesn’t approach Chrissy in sincerity or dedication to her task. Megyn Kelly’s as hard and narcissistic as Chrissy Snow was soft and magnanimous. 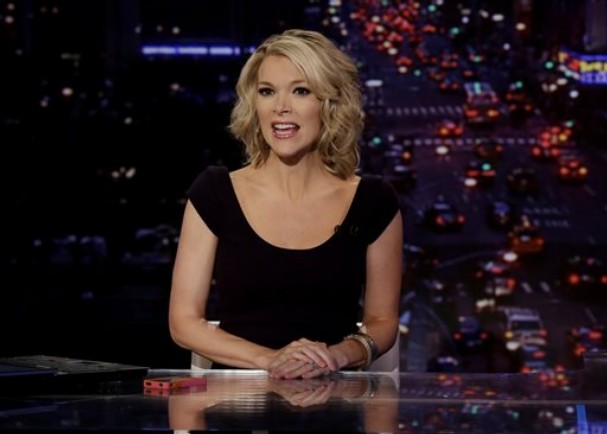 Only The Kelly File is presented as factual, not fictional. With heavy promotion, and after her flatlining debate moderation during the 2012 presidential campaign, Ms. Kelly began with a softball interview with Tea Party hero Sen. Ted Cruz, (R, Texas), who has led a rebellion against the nation’s most far-reaching government dictate (ObamaCare), sparked a small government shutdown and challenged Republican Party leaders to confront and defy the President who negotiates with Islamic dictatorships but not duly elected Congressional leaders. One would think the TV personality in charge of the show would have something serious and interesting to ask of such a man.

Think again. Thinking is on the way out in this dumbed down culture – which is not just dumbed down by Fox News – and The Kelly File like its name is merely the latest example of the Oprah-ization of American television and the disappearance of serious, let alone objective, broadcast journalism. The Kelly File joins Fox’s The Five and The O’Reilly Factor in the spread of vacuous if alliterative shows that are more show than news or analysis. If TV feels like Network (1976) come to life, with Howard Beale (Peter Finch) raging while Black Panthers and mystics pop off for higher ratings in a culture down the tubes, it’s not your imagination. In fact, O’Reilly teased a “Mad as Hell” segment earlier this month.

It’s not that Ms. Kelly is not intelligent and certainly there’s a place for attractive people on television. The problem with her show is that she tries too hard, constantly talks about herself and mugs for the camera and none of this adds up to fair, balanced or useful programming. She showed a clip of a race car wipeout video that’s been looping all day long. She talked about Miley Cyrus. She teased her news reel several times. She eventually interviewed three people who question the government’s decision to shoot to kill an unarmed woman in Washington, DC in the most compelling segment, which felt like the shortest segment. Ms. Kelly hardly scratched the surface. When one of the guests, a black man who pointed out that one does not lose one’s individual rights when stopped by police near the White House, Megyn Kelly had nothing else to say or ask. She showed no more interest in the shooting and death of a mother recklessly driving alone with her child for no apparent reason than she did in Sen. Cruz, shutting down government or defaulting on the nation’s debt. It’s as though everything to her is blurry, fast and best left unexamined.

She proceeded without disclosure to share a headline printed by a newspaper owned by the same company that owns Fox News. The headline posed a question that was debunked by her two legal guests in another short segment about a serious, big-city threat to life and a child in a moving vehicle before migrating to her favorite subject, herself, her 10-year-old audition footage and pictures of her spouse and children, one of whom is a baby she calls her “little man” (a demeaning expression which would be unacceptable had a father called his infant daughter his “little woman”). On top of that, the hard-charging cream puff smirked and mugged her way through a free-for-all with Fox’s cast from The Five in which she got facts wrong and wanted to know if the panelists had ever “hooked up.”

Megyn Kelly ended her show by urging us to “continue the conversation” apparently without realizing that, like most in today’s perceptual-bound culture, especially TV, she hadn’t started one. She hadn’t came close. In fact, Ms. Kelly in her Kelly File premiere never seemed for a second like she wants to, or knows how to, think for herself, much less give the audience the facts and analysis with which to do the same. Her predecessor with his self-proclaimed influence factor boasts every night that “the spin stops here.” Increasingly on Fox News and in what’s best described as a lighter version of the preceding show, so does news, thought and intelligent conversation.

[Summer 2015 postscript: the show and hostess have improved. Ms. Kelly has demonstrated that she is capable of being more serious than she was in her debut, discussing the Islamic terrorist attack on free speech and the first Islamic terrorist beheading in America at length and exploring important issues in greater depth. But in her moderation of the 2016 Republican presidential debate, she reverted to her sensationalistic, anti-conceptual approach with loaded and improper questions about supernaturalism and quotes from reality TV show-based celebrity spats.]