American Ballet Theatre: A History premieres tonight on PBS (check local listings). It is not to be missed. In fact, it’s the most informative and enriching non-fiction television programming I’ve seen in years.

The new, 90-minute documentary by Ric Burns is a fascinating condensation of ballet’s essential history fused with this particular company’s story, culminating in an elevated theme about man, his art and his history. The program is really driven by Apollo’s Angels: A History of Ballet author and dance historian Jennifer Homans, the most knowledgeable, objective and philosophical among the film’s many strong voices and interviewed participants.

Homans is one of several dancers, former dancers or company experts to assert that ballet is both transcendent and ephemeral and this is foremost a precise, thoughtful and gentle study of this uniquely fine art. But it is Homans who articulates that ballet is both an integration of traditional or classical art forms and a radical advancement of the arts.

Consider that ballet originated, as she explains, in France as an expression of masculinity, both as a radical new art form in the 18th century and based on certain rules, spun from the Renaissance, framed by aristocracy and taking measure of man in pursuit of his excellence and nobility. Yes, the body’s movements in precision were created, Homans says, as a living representation of the whole man, with the male dancer not reviled or subsidiary as he is today. Only after the French Revolution, when the will of the collective replaced the rule of the king did woman takes precedence in ballet. “The male dancer is really hated by the time you get to the 19th century,” Homans contends. The ballerina emerged, she explained, citing the ghost Giselle among others, as a symbol of the irrational and the supernatural. American Ballet Theatre: A History really delves into the essential ideas and evolution of the ballet.

Ballet moved to Russia during the period when Czarist Russia embraced French culture and ballet came back to the West following the Communist takeover of Russia. Therefore, Homans tells the audience, in stark, soothing lines interspersed with pictures, archival footage and breathtaking pictures of dancers from the dance, the roots of American ballet lie in the collapse of the Russian Empire and what she calls “the phenomenon of exile” with dancers such as prima ballerina Anna Pavlova, for instance, who fled Russia and brought ballet to venues across America.

This Homans describes as a diaspora of Russian teachers who seed ballet in America. Indeed, she points out that the story of ballet in the 20th century is the story of the confrontation between the United States of America and Communist Russia. Choreographers such as Jerome Robbins and Agnes de Mille were trying to redefine a Russian tradition in American terms. Robbins and De Mille are two of the four main choreographers figured into the American Ballet Theatre’s (ABT) history. With the other two, Antony Tudor and George Balanchine, they defined ABT’s objective. 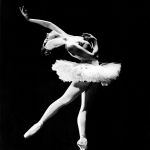 Each segment on the four choreographers is interesting for its own reasons. For example, Tudor had a dark side as ABT’s artistic conscience; his primary achievement is that he wanted to make a ballet not about fairies, birds and elves but about real people. The company grew organically with its artistic progress, according to those interviewed, including the intellectuals. Among the artists who are pivotal to the company’s formation, Alicia Alonso (pictured here at left) is interviewed, contributing some insightful thoughts on the art of dance, recreating what it feels like in poetic, evocative words. Others featured or addressed in ABT’s remarkable story include the late Donald Saddler and Frederic Franklin, dancers Susan Jaffe and Julie Kent, choreographer Alexei Ratmansky and artistic director Kevin McKenzie, Misty Copeland, Gillian Murphy, Marcelo Gomes and Hee Seo and dance critics Anna Kisselgoff and the late Clive Barnes. Notably absent is the company’s former dancer and director Mikhail Baryshnikov, whose defection in Toronto from Soviet Russia in 1974 “led to an incubation of talent”. On the other hand, founding member and co-director (1945-1980) Lucia Chase, who is somewhat victimized here at the expense of Mr. Baryshnikov, is fully chronicled.

That ABT began simply as Ballet Theatre elicits the interesting fact that the word American preceded the company’s title in 1950 during the State Department’s sponsorship of a postwar tour through Europe; the dancers wore parachutes in the summer of 1950, according to one dancer, as they traveled as cargo in Air Force planes. As Stalin’s murderous Soviet regime, neither named nor addressed here, cracked down on liberty, America took the cultural lead in ballet. ABT’s worldwide reputation became legendary. This is thanks in no small measure to defector Mikhail Baryshnikov, whose discipline and emphasis on the ballet corps while ABT director greatly advanced American Ballet Theatre when he took over in 1980.

If the politics of ballet are slightly obscured or sidestepped, the art of the dance is not. Ballet is described and depicted admiringly and even reverently, especially by Ms. Homans, as an expression of goodness and happiness and one commentator observes that ballet is a metaphysical reassurance that “there’s something beautiful and good and worthwhile inside all of us”.

This is true, as evidenced by Buddy Squires’ exquisite slow motion capture photography, and the cinematography of the dancers, while not a recreation of ballet as it is intended to be seen live to music, is simply stunning and jaw-dropping. The film matches the well-chosen words by Alonso, Homan and others. “Transporting dance is so direct that everything else falls away for those moments and the audience enters that and mirrors the dancer,” someone says. Such transference between dancer and audience is exalted for both and that is partly captured, examined and contemplated here.

Encapsulating this extraordinary experience, Jennifer Homans concludes: “[Ballet is dance] as the arc of a life; it has a beginning, a middle and end and then it’s gone. It marks the passage of time.” Tonight’s American Ballet Theatre: A History, like an expertly conducted, choreographed and danced ballet, skillfully expresses, and also rediscovers, such grand moments in dance.

American Ballet Theatre: A History, a production of Ric Burns’ Steeplechase Films and Thirteen Productions for WNET, is part of the Emmy-winning American Masters series, which explores themes, stories and personalities of masters past and present. The film will be available on DVD July 14.