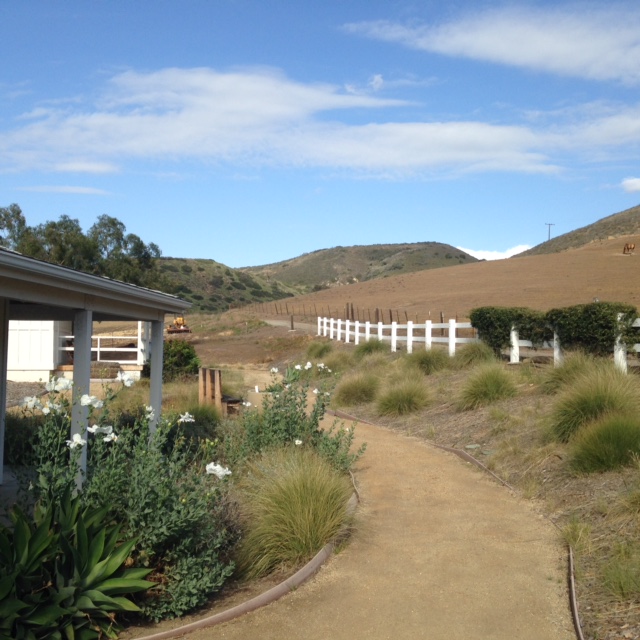 Last night’s Cowboy Cookout and Ranch Tour at movie star Joel McCrea’s ranch in Southern California was perfect. The air was a bit chilly. But, with everyone helping to make the annual Joel and Frances McCrea Ranch Foundation fundraiser a success, from bus driver Pete and ranch staff to the poet, the band and McCrea’s grandson Wyatt, who lives there, the place was warm, relaxed and rooted in Western culture. Guests added Hollywood glamour. 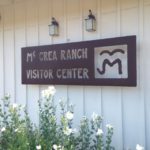 You’ve probably seen Joel McCrea’s movies. Whether romancing Claudette Colbert in Preston Sturges’ The Palm Beach Story or Veronica Lake in Sturges’ Sullivan’s Travels or leading as handsome, freethinking young Dr. Kildare or in Alfred Hitchcock’s Foreign Correspondent, he was a commanding presence on screen. But the underrated, underappreciated actor—who was 6’4 in height—was most comfortable in Westerns, appearing with his wife Frances Dee in Wells Fargo, Cecil B. DeMille’s Union Pacific opposite Barbara Stanwyck, Wichita, as Bat Masterson in The Gunfight at Dodge City, opposite Randolph Scott in Sam Peckinpah’s Ride the High Country, usually as lead and hero of the motion picture. I’d recently seen him as the title character in The Virginian, the 1946 Western. After that, McCrea appeared in mostly Westerns, including his last picture, 1976’s Mustang Country.

Apparently, the Golden Age-era movie star made the Western part of his life. Encouraged by his mentor, humorist Will Rogers, McCrea bought the first thousand acres of private ranch property in Ventura County—what’s now northern Thousand Oaks, California—in the early Hollywood years and made ranching a labor of love. Eventually, Joel McCrea would buy a sprawling ranch where he lived with his wife of 57 years and raised three sons, Jody, David and Peter. Today, a small portion of the original McCrea Ranch in the Santa Rosa valley is left, including the main house McCrea had built and remaining outbuildings, such as the bunkhouse, chicken coop and milk house. 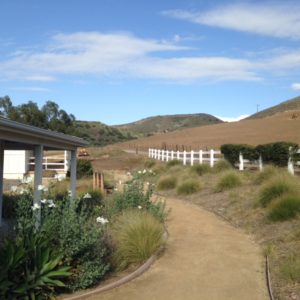 Yesterday, foundation docents and park staff showed the grounds. There’s a road leading up to the house, with a large kitchen and original appliances—including the elevated refrigerator to accommodate McCrea’s height—master bedroom, reading or sun room, Mrs. McCrea’s writing room, living room and the boys’ rooms above the garage. It’s a stone’s throw from the avocado-shaped swimming pool and the trees and vegetation Mr. and Mrs. McCrea planted. The 1,400-square foot visitor’s center has photographs and films on McCrea and his family in movies and at the ranch. Being there, it’s easy to imagine Joel McCrea riding horses and milking cows (he did both). After he died in 1990, Frances moved into the bunkhouse. Mrs. McCrea never lived in the main house again. 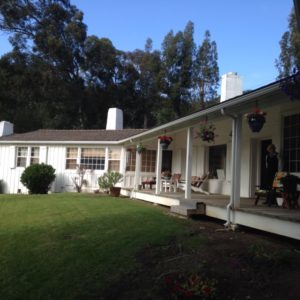 The house he’d had designed and built is filled with fireplaces, books—Frances McCrea was an avid reader and Joel McCrea, whose forefather signed the Declaration of Independence, was a serious student of American history—and portraits of Lincoln and Washington. This is a modest, family home, which is not open to the public. So, while the property meets the foundation’s goal to conserve the region’s history and lifestyle, and South Pasadena native McCrea is the embodiment of the healthy, tanned, good-looking, hardworking outdoorsman with which one associates Southern California, the rustic ranch evokes the man and his chosen values. It is here that the movie star lived, worked and enjoyed privacy. The place exudes McCrea’s unique ability to shuttle between relaxed, easygoing charm and hard-driving loyalty to one’s personal code.

Donors attending last night’s Cowboy Cookout—including Western artists and intellectuals such as Eric Heisner, William Wellman, Jr., whose father directed McCrea in The Great Man’s Lady and Buffalo Bill, and Bruce Boxleitner (Contagion, Tron, CBS’s Scarecrow and Mrs. King, Gods and Generals, ABC’s How the West Was Won)—joined Wyatt McCrea in toasting McCrea Ranch as a place worth preserving as it once was. So do I, especially to study, experience and honor McCrea Ranch as home and land where Joel McCrea cashed in on what he’d earned—as an example of where a man once lived the honest, productive life he’d portrayed in the movies.