The End of The Greatest 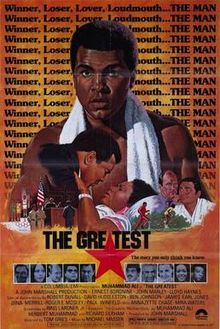 Muhammad Ali, who called himself The Greatest, is gone. He was 74 years old.

The Kentucky-born boxer who became a world champion told his story in 1977’s The Greatest co-starring Ali and Ernest Borgnine as his trainer. The film originated “The Greatest Love of All”, the egoistic anthem later made famous by the late Whitney Houston.

Ali’s life was exceptional for his arrogant expression of egoism rooted in superior athletic achievement. I think Ali’s life is likely to be distorted and misunderstood for many complicated reasons, stemming from the times in which he died, this season in which a con man, the fraud who is Donald Trump, claims to be the best and isn’t. Muhammad Ali, whatever else his flaws, claimed to be the best and, in fact, he was.

Ali’s pride in his own ability, not to mention his poetic and often profound musings, commentaries and thoughts, was larger than life. 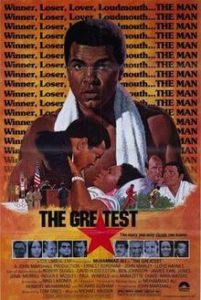 He was a poor boy in Louisville, Kentucky, encouraged by a policeman to channel his rage against injustice into training as a boxer, which he did. Soon, Ali, originally named for his father (who was named for an abolitionist) and known then as Cassius Clay, won the Gold Medal at Rome’s 1960 Summer Olympics, appeared in Rod Serling’s Requiem for a Heavyweight with Anthony Quinn and upset the world’s heavyweight champion. He was then mentored by Malcolm X and joined the Nation of Islam, adopting the new name and seeking his own set of beliefs, a practice he never let go. He kept winning—Ali lost five bouts—and thinking for himself. He sometimes did so by race-baiting, bluster and dubious tactics.

He eventually left the Nation of Islam and mellowed his anti-white views and practiced his religion in private but not without first citing his personal beliefs as a conscientious objector to being drafted by the state into the Vietnam War. Ali was arrested, lost three years of prime competition due to persecution by the United States government and, long before Apple‘s Tim Cook, he fought a Democrat-controlled Department of Justice and later won in the U.S. Supreme Court. The damage to his career, however, had been done.

Yet Ali had influenced the nation, which turned against the Vietnam War, which was never declared and never won, and the military draft, which was abolished by President Nixon. By the time Muhammad Ali triumphed the last time as world champ, having defeated great boxers such as George Foreman and Joe Frazier and Leon Spinks, Ali had inspired Sylvester Stallone to make Rocky. Future athletes, such as Oscar De La Hoya, would invoke selfishness, too. According to Objectivist scholar Harry Binswanger in 100 Voices, Ayn Rand wanted Ali to play a role in an adaptation of her novel Atlas Shrugged.

If you think about it, it’s not difficult to see why. Amid today’s numerously preached and accepted contradictions and confusions, with scoreless sports games and entrenched egalitarianism, Muhammad Ali stood out as one—against the mob, the intellectuals and the state—proudly proclaiming his own excellence. He was arguably often tactless and vulgar, sometimes animated or even cartoonish and occasionally his means and ends were in legitimate dispute. But, in asserting with pride his own superior ability, Muhammad Ali was never wrong. Unlike today’s frauds, he dared his detractors to check the record. Ali earned his poetic and prideful proclamations.

It turns out that Ali, who was afflicted with Parkinson’s disease, paid a high price for his fierce and determined, possibly overlong and overzealous, competition. But Muhammad Ali was right. He was, in fact, the greatest. As the song from his movie says, “learning to love yourself is the greatest love of all.”

This is fundamentally true. As the nation once in turmoil during Ali’s blustery, arrogant and triumphant youth goes into a violent new era ominously threatened by a blustery, vacant and bankrupt power-luster who would be president, Ali leaves a magnificent legacy which calls upon Americans to differentiate between the proud man whose pride is based in reality and the loud man whose bullying and boasting spews from raw, unchecked emotions.

Ali once said: “It’s not bragging if you can back it up.” Repeatedly, consistently, he did. This is what makes a man great. This—authentic self-esteem realized by human action—is what makes Muhammad Ali a great man.