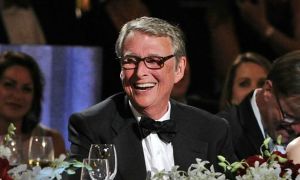 The death of director Mike Nichols signals the end of an era. Throughout his career, Nichols was a rigorous intellectual in pursuit of serious artistic endeavors. He was the opposite of today’s vacant purveyors of cynical, vulgar fare; Mike Nichols had something to say, show and tell. From 1967’s picture about disillusioned youth, The Graduate, starring Dustin Hoffman, to 2007’s picture about disillusioned adults, Charlie Wilson’s War, starring Philip Seymour Hoffman, Nichols, who died in Manhattan at 83 this week, groped for stories about sifting through the mixed and muddled world of the 20th century and finding some kind of higher meaning, often and, at his best, elevating the good. Even his darkest fare, such as the pretentious Closer (2004), mined the world for meaning.

The German-born son of a Jewish doctor who fled Nazi Germany and a “miserable and manipulative” mother (upon whom he based his early comedy routines with partner Elaine May) captured in his work the evolving American ethos from goodness to self-doubt and eventual self-loathing. He did it with a particularly searching sense of humor (with a blue streak) that exists to examine and explore, not for the sake of the joke, but for the sake of the thought that accompanies, yields and evokes the laughter.

What the New York Times calls his “keen comic timing” comes from the genius of his early observations bred by intense alienation and social anxiety he may have experienced after a doctor’s error that left him hairless (he wore wigs). According to a bio on Turner Classic Movies (TCM), Nichols was inspired to become a director upon watching the stage work of Elia Kazan when Nichols was 16 years old. The New Yorker found himself fitting in for the first time in his life and identifying his own talent and ability, in America’s quintessentially melting pot, middle class city, Chicago, where he later said he discovered that he could be “happy and neurotic.” That’s where he first connected with his creative partner, the sharp, sardonic Jewish comedienne Elaine May. Their work set the standard for mid-century American comedy and Nichols went on to drop out of college, appear with May on television programs in comedy routines, and direct Neil Simon’s Barefoot in the Park (1963), originally titled “Nobody Loves Me”, with a then-unknown actor from the San Fernando Valley, Robert Redford. After gaining acclaim for directing on Broadway, he directed his first motion picture in 1966, an adaptation of Edward Albee’s foul-mouthed Who’s Afraid of Virginia Woolf? with Elizabeth Taylor and Richard Burton.

Nichols, who struggled with depression and once considered suicide, went on a year later to direct the seminal film of the counterculture, The Graduate, which is heralded by the New Left though it ends with an affirmation of middle class values amid a distinctive score by Paul Simon. It became the biggest moneymaker of Mike Nichols’ career. His next hit came in the decade which briefly deviated from New Left dominance, the 1980s, in which Nichols depicted another lonely individual’s struggle against the dominant culture, Silkwood, starring Cher, Kurt Russell and Meryl Streep in the title role singing “Amazing Grace” while driving a Honda toward a decidedly unhappier ending than the back of the bus finale in The Graduate. By then, Nichols had started to produce through his Icarus Productions—Whoopi Goldberg’s profanity-laced standup show and the optimistic American-themed musical Annie and Tom Stoppard’s The Real Thing on Broadway—including the groundbreaking ABC drama Family.

Though The Graduate came to represent Hollywood’s emerging anti-heroism, with glamorous movie stars and heroic stories pushed aside for dark, depraved themes and figures, Mike Nichols moved toward depicting an American resurgence of optimism and commercialism, in 1988’s unabashedly pro-capitalist Working Girl, with its opening and closing shots of the Twin Towers—referenced in Carly Simon’s theme song urging audiences to “let the dreamers wake the nation”—Statue of Liberty and the triumphal rise of the self-made entrepreneur in a skyscraper. The self-made is explored again in 1991’s quiet, underrated character drama, Regarding Henry, featuring Harrison Ford and Annette Bening as a couple who bring themselves into alignment with their chosen values after an act beyond their control radically changes their lives. His career reached its zenith with disease-themed TV productions Wit, which centers on cancer, and Angels in America, which dramatizes AIDS, preceded by his deceptively brilliant integration of his works in music, drama, humor, stage and cinema; an elated homage to being self-made, happy and neurotic, The Birdcage starring Nathan Lane and Robin Williams. That the adaptation of Jean Poiret’s La Cage Aux Folles was written by his original comedy partner Elaine May brings the outstanding career of the insatiable Mike Nichols full circle. Nichols, who is survived by his brother, children and wife, journalist Diane Sawyer, deserves to be studied and remembered. I think it may be another century before his brand of brightness, wit and intelligence make their way into pictures, shows and stories of high caliber again.