The cast of the gritty, Greenwich Village police comedy, Barney Miller (1975-1982), was anchored by Hal Linden in the lead. He played the 12th precinct’s rational police captain, who was practical, balanced and optimistic. The show’s uniquely dry, humorous pathos stemmed from shuttling between cynicism and idealism, almost always with a dash of the ridiculous. A multicultural cast avoided tokenism in the writing, which twists stereotypes every which way with cop and criminal characters that are old, Puerto Rican, black, female, Polish, gay, etc. The most intellectual character was a police detective who’s a writer named Harris. 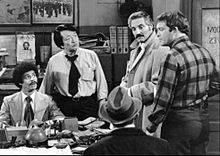 Detective Harris was played by Ron Glass, who died last week. Glass played Harris with perfection for all eight seasons. It’s been a long time since I’ve seen the show, which isn’t easy to find in syndication, and longer since I watched with my dad as a kid while it aired on ABC. I remember Detective Harris as clever and discriminating in spending his wit and intelligence on his work in the precinct; Harris did his job and did it well and was often called upon for his writing skills. What was distinctive, besides his being black in an era in which most black TV characters were poor, uneducated or criminal, is that Harris was both intellectual and debonair; he was handsome and was always the best dressed without being a dandy.

Det. Harris was also the only one with a steady, long-term career goal outside of law enforcement. He was usually relaxed, driven and disciplined. Harris always held himself a bit removed from his co-workers. He was proud, even a bit arrogant, yet affable and he never sought to be just one of the guys. Harris had higher aims. As I recall, the sophisticated detective was also the least prone to suffering, guilt and self-pity. Harris was an egoistic, happy policeman.

I can’t think of too many writer characters in Seventies television, let alone writers portrayed as positive and efficacious, as against fundamentally flawed and neurotic, and in mostly male work environments. I noticed this as a boy and, because I knew I wanted to be a writer, I found myself looking to Harris as a character every week, watching how he held and handled himself, checked himself, disciplined himself, withdrew or spoke up and worked within the precinct as a means to an end. That Harris, who eventually wrote and published a book, happened to be black was less integral to his identity than that he wanted to write. I noticed this, too. I think that’s thanks to Ron Glass, who took biting lines and deadpan looks, gave the character depth—not merely sass—and created an indelible cop-writer.

Last week, a decrepit dictator died who should be remembered for mass enslavement, misery and death and, as a warning, for glorifying thuggishness in TV, media and culture. TV also lost an amicable and talented entertainer, Florence Henderson, who played a cheerful housewife and mother for five seasons on another ABC comedy. Seeing the glorified thug on TV taught me early in life that something was terribly wrong with the world. Watching an idealized parent on TV gave me some guidance in the form of an often artificial and silly situation. I gained the most value from watching an actor playing an intellectual policeman who chooses to become a writer. For eight seasons on Barney Miller, Ron Glass made projecting a goal into the future seem possible and enjoyable. He did it with a sense of hard, grueling work as a rare and rewarding achievement. For this reason, I think it’s Ron Glass, the least likely of these three to be known, grieved and remembered, whose work will have—and ought to have—the greatest impact in the future.