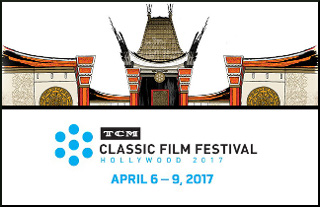 Comedy’s the theme for this year’s classic film festival from Turner Classic Movies (TCM), which TCM is dedicating to its late host Robert Osborne. With movies screening this week in Hollywood, and guests ranging from Joel McCrea‘s grandson to film scholars Donald Bogle, Leonard Maltin and, on opening night, director Norman Jewison with 90-year-old Sidney Poitier for a 50th anniversary tribute to In the Heat of the Night (1967), the “Make ’em Laugh” theme is likely to be delivered with the brand’s unique ability to take movies, including those laced with humor, seriously.

That said, TCM’s movie picks include the dark (1971’s Willy Wonka and the Chocolate Factory and Harold and Maude) and asinine (The Jerk) and film comedy’s modern godfather Mel Brooks is scheduled for an appearance. I’m looking forward to having an opportunity to see, meet or cover pictures and guests such as King of Hearts (one of my first theatrical movies) with Genevieve Bujold (Coma, Anne of the Thousand Days), a wonderful actress whom I’ve had the pleasure to interview.

This is my third TCM festival. Last year’s festival included an interview with Faye Dunaway (read my exclusive report here) and, as usual, thoughtful introductions to movies by Leonard Maltin (read my exclusive 2015 interview with him about TCM and classic movies here). Gathering with people who love movies is a wonderful bonus for this movie fan, journalist and storyteller. Being among those who think about movies, and seek to know why they love ’em, is the best.